Captain America continues the fight against Arnim Zola in Captain America #4 which takes place 11 years after the events in issue #3. Last seen in a moment of horror, Steve Rogers uncovered his chest in to find Zola’s face embedded into it.

Since then, the past decade hasn’t been kind to Rogers and his young charge, Ian, as they hunt together for food while keeping themselves and the Phrox tribe from being discovered. The pair have bonded as father and son with Ian being taught how to wield the Captain’s shield. Captain America doesn’t plan to live much longer as the Zola Consciousness Virus eats away at him mentally, prompting him to raise Ian as a fighter and hero.

After downing a quarry, the duo gets ambushed by a mutate. Searching the grounds, Rogers finds a computer with a map to Zola’s headquarters — a discovery that could potentially bring Captain America back home.

Rogers doesn’t have the monopoly on discoveries this issues as Ian finds out who his real father is. Ian also comes face to face with the virus exhibiting itself on Rogers’ chest, and both know it’s only a matter of time before Rogers turns. To save Ian and the Phrox, Captain America has to return home and call in the Avengers.

Back at Zola’s headquarters, Jet Black — Princess Zola — brings in a Phrox hostage, a banished chief who goes on a rampage attacking his captors, but not before mind readers reveal the circumstances of the Phrox Chief’s banishment. As Princess Zola tells her father that it was Captain America who banished the chief, Zola’s shocked to discover his enemy is still alive. He gives his daughter mutates bearing variants of the Captain’s shield as soldiers tasked with finding the man she believes killed Ian. 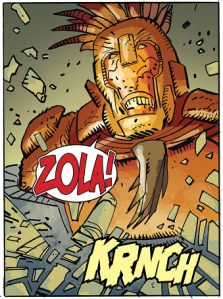 Rick Remender does a great job of bringing readers up to speed — Zola’s reign of terror has spread, and it’s right on the Phrox tribe’s doorstep. Things aren’t coming easy for the Captain, and after 12 years, he finally discovers a breakthrough that could finally bring him home. It’s a radical departure from standard comic book fare which resolves conflicts within a few issues, and it will be interesting to see how Remender deals with the lapse of time.

Captain America will also have to deal with the relationship he has with his “son” Ian. Will Ian become a part of the Marvel Universe as a new Bucky? This story arc could be the basis for many more stories involving Ian, and while it doesn’t feel like an origin story — it could very well be a part of Ian’s lore.

With each new issue, the title adds more layers to a well-developed story that’s complex but solidly laid down. Captain America #4 continues the pace adding new developments in a way that doesn’t dilute or distort the plot with unnatural twists and turns. Remender isn’t afraid to fast forward years into the future because he knows how to steer the plot, and it’s in very capable hands.

John Romita Jr.’s pencils add to the book’s consistency, and readers get to see what 11 years of wear and tear can do to the Captain’s uniform. Rogers appears gaunt, and disheveled, but his body and form are still excellent. While it’s nice to see Romita instead of a three-and-out — hopefully he remains for the entire story arc — his pencils aren’t as good this month as last’s — things just seem a little more bland this time around. There’s a bit of character fatigue — everything is starting to look the same, from the featureless Phrox to the featureless mutates. All life outside of Rogers, Ian, Jet Black, and Zola are made of shapes without defining features or characteristics that make them memorable apart from each other.

The colors by Dean White and Lee Loughridge look a bit muddy. It’s understandable why the landscape looks as bleak as it does, but the palette isn’t appealing with its kaleidoscope hues. It probably doesn’t help with the Phrox and mutate figures looking the way they do as it’s hard to add dimension and shades in the absence of detail.

Captain America is still one of the better books in the Marvel NOW! relaunch, and anticipation is building for a duel between a desperate Captain America and the man who stands in the way of him getting home. Rogers has waited too long, and fought too hard to fail. For now, the odds are stacked against him, but one can’t help but hope for the best because it’s easy to relate to a hero who’s far from home.

Buy Captain America #4 from Things From Another World!