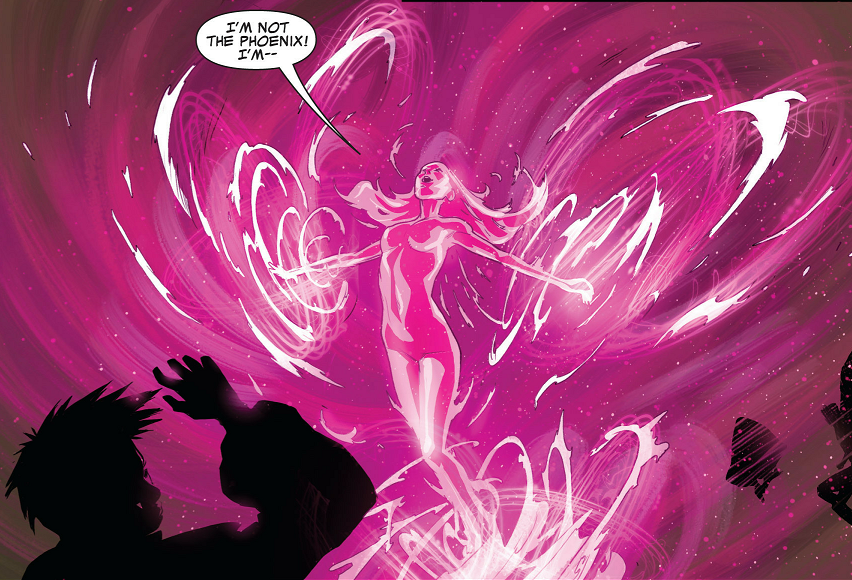 Last issue in Guardians of the Galaxy #12, Jean Grey accepted her guilt.

Rather, she accepted what she would become.

This issue in Guardians of the Galaxy #13, Grey turns the finger back on Gladiator.

“None of you could stop it, either. None of you!”

After all, after the retconning Jean Grey and the Phoenix were discovered to be two entirely separate beings. Grey was subsequently absolved of all of the Dark Phoenix’s universe-changing deeds though the Shi’ar were still smarting over the loss of lives.

Gladiator’s trial thus ends with a battlefield showdown that only further damages his cred as Imperial Guard leader. After Grey manifests powers never seen before, the two collide in epic Dragonball fashion which ends with both of them losing consciousness.

For Grey, a stalemate is a victory. No normal earthling could fight Gladiator to a standstill.

With the Guardians of the Galaxy now serving as Earth’s protectors and young Scott Summers showing the kind of Cyclops mettle the elder version has only recently fully realized, it looks like a win for the X-Men and validation for Grey.

A celebration would be in order, but there’s another change — one that kicks off Greg Rucka’s run with the Starjammers.

Reunited with his long-lost and previously considered-dead father Corsair, Scott does what any son would do — jet off into space for adventure and some parental bonding.

The announcement is a bit jarring — the last we saw Corsair and Scott talking, young Summers went alone to his room to sort out his feelings. Evidently, Scott’s considered this long and hard. He knows the future will bring him and Jean together, but the sad fact is they don’t get a happily ever after. Jean dies, several times.

Cyclops, possessed by the Phoenix, kills Professor X and becomes a fugitive on the run from the Avengers.

Figuring to remove himself from the equation altogether — though in a distant “I’ll be watching you all from space” capacity — Cyclops leaves Earth, Laura, Jean Grey, and his X-Men.

Oh, Cyclops. Has any other well-meaning superhero done this much damage?

And like many readers who are wondering the same thing, the remaining X-Men are left to question: What happens if the X-Men figure out a way to return home? Will Cyclops come back in any measure of time?

And what will happen to Jean Grey?

It’s a bit frustrating — we finally have Cyclops and Jean Grey back together in a new title, and now they’re separated again for the long haul. Rucka better do well with the Starjammers book because everyone who jumped on the All-New X-Men train when it started has been left with a gigantic broken promise. Yes, we get Jean Grey, but with Scott calling it quits before it even begins, I’m a little saddened that dynamic has been cut short.

And for that, Bendis rules. Though it’s a Guardians of the Galaxy issue, this is all about the all-new All-New X-Men. We get a few I am Groots and even an I am Peter Quill, but besides Rocket doing what he normally does, no one should be faulted next week when sales of All-New X-Men go down because people thought they picked it up already. Bendis can switch it up, put the brakes on one story while going full steam on another.

But while we’re talking about this issue’s strengths — as a space opera, it’s hitting all of the requisites — one of the biggest weaknesses is the pacing, and the greatest weakness is the constant twists and turns that don’t seem to develop anything solid. It’s like the X-Files when Mulder and Scully were constantly looking for aliens, but no one would ever believe them.

Bendis is great when he’s laying down the foundation for a story. The problem is the execution of those plots on the backend — plot threads connect suddenly, characters make ginormous changes without warning, and battles finish without any real consequences. There’s a bit of fist-shaking and some warnings, but after something huge like an invasion on the Shi’ar homeworld, you would think there’d be bigger repercussions.

The solution would have been to add an epilogue issue to bring things together more naturally, but we get this one issue that deals with the immediate story and packs in as much as it can. The X-Men and Guardians of the Galaxy win, they come home, Cyclops leaves. It feels more like an outline than a graphic novel, and I wonder if Bendis is soaking up too many issues at the front end and leaving himself with too little for the ending, or if editorial is cutting him off at the knees.

The actual trial of Jean Grey seems to last all of about five minutes, and Gladiator doesn’t even get to finish his opening statements before J’son basically kills it with reasoning, logic, and understanding.

At the least, we get Jean Grey who’s fast-tracked her abilities, proving Professor X right — she definitely is the world’s strongest mutant.

On a visual level, Sara Pichelli and David Marquez deliver some astounding pages with Justin Ponsor’s colors bringing it all together under one cohesive tent. Pichelli is a genius, and her panels don’t lack for effort, execution, or detail. Marquez’s faces get a little doll-like, but his artwork has a beautiful polish to it with its clean lines.

Ponsor may be my favorite colorist at the moment — the dimensions his layers add bring the characters up off the page. The art gets a breath of life with shades that bring out facial bone structures, musculature, and the epic psionic blasts. I’m gushing, but I can’t really help it. Ponsor’s touch gives the issue a sheen that makes it one of the best looking titles on comic shelves.

And that brings us back to the story. Guardians of the Galaxy #13 is a good issue. It isn’t great. Visually, it’s stunning, but without a a great story, it’s only partially complete.

Bendis’ crossover gave us neither a trial or much in character development until the very end of the run. Jean has her new powers, and Cyclops is gone. Maybe this will open it up for Iceman, Angel, and Beast who’ve played second-fiddle to the love triangle involving Laura Kinney who’s left to deal with the emotions of a romance-never-to-be.

What we’ve basically received are plot points over plot points, and there’s general excitement over things to come. But to what end? Like a rolling stone that gathers no moss, The Trial of Jean Grey and All-New X-Men at large have given us great moments and potential storylines to be harvested only to become stepping stones for more plots, twists, and threads.

Tragically, it all stops short of epicness as we get another episode in a long-run soap opera that teases us along. And that’s what I expect of Bendis — epic epicness. Instead, these crossovers have falled a little short with most of the action happening at the beginning and ends of each episodes.

On the one hand, it’s enough to keep us coming back. On the other, we’re reminded of Chris Claremont’s legendary stories that were sometimes contained in two issues. They had tremendous impact on the universe at large, but one could get their fill and be satisfied if they stopped there and then. That’s what’s missing from these crossovers, and while I’m still enjoying Bendis’ run as X-Father, I’m hoping these potential story threads don’t get swept under the rug one by one, and we get some definite closure.

Buy Guardians of the Galaxy from Things From Another World!