These pages of Batman #17 constitute the final chapter in Death of the Family. It’s just a fact and to be honest, this is where everything changes for Batman. Where he goes from here and whether he has the full aid of the Family has yet to be discovered.

Their trust is also to be questioned as they have just gone through the single worst trauma in their shared history. This arc has bled through into all of the Batman Family books, including Red Hood and the Outlaws. Nobody is safe from his evil machinations. Their secrets are his for the unearthing. 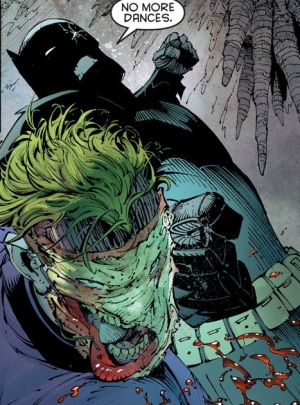 In short, the Family is royally screwed. The issue begins just after the events of issue #16 and sees the Last Supper of the Batman Family. At least, that’s what I’m calling it. These pages are some of the most heart-wrenching panels I have ever seen in any comic book in my 20 years of reading them. The Joker has just gone too far with the Dark Knight and finally made his bed as Batman’s mortal enemy.

If you were ever unsure of how their rivalry would end, this may shed some light on it. In some ways it’s a cliff-hanger ending, but the last page shows us just who gets the last laugh. The face-off of the Family and the Joker is one of the more disturbing scenes I’ve seen in a comic without the need to be too graphic. It’s disturbing, but tastefully so.

Scott Snyder has gone above and beyond what I thought he might do in this arc. As I’ve mentioned several times and in casual conversation with friends, Snyder’s run is the first time in more than 15 years that I’ve felt scared for the Dark Knight. In every other run I’ve read, it’s just common sense that he’s Batman and they’ll never really kill him off. The Joker has taken Batman and the entire family, including Alfred, straight into the danger zone. Gone are the days of feeling that dangling his mortality in front of fans is taboo. The Clown Prince of Crime has decided that it’s time to take off the kid gloves and toss the Caped Crusader headlong into the meat grinder.

For making Batman #17 darker than usual and getting us out of our comfort zones, I applaud Snyder. The pacing was great and the dialogue was pure Batman, down to the last laugh. The action was to die for and felt like the best short film I’ve ever bared witness to. This could never have been a one-shot issue, because my brain kept replaying the previous Death of the Family issues as each line was uttered. It’s 100% canon and pure Dark Knight. Just the way that several lines were uttered were perfect in every possible sense of the word. As Joker proclaimed, “…why have you never peeked behind my curtain, oh great detective?,” I felt, as always, that Joker knew something he wasn’t telling.

This was different, though. It was as if he were finally stripping the facade of their “relationship”, exposing the reasons as to why Batman could never kill him. This issue went far beyond mere morality, but straight to the heart of what Jason had always suspected. This was a much deeper Batman issue than I’ve seen since the Killing Joke or Long Halloween. That sort of writing cannot be taught or crafted. That’s something special that comes along once in a great while and helps redefine a character inside and out. 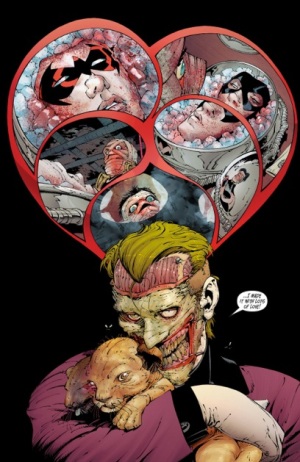 As I just proved in regard to Snyder, I can also speak at length about the artists here; penciller Greg Capullo, inker Jonathan Glapion and colorist FCO Plascencia. Very few artists can say they had an impact on how a comic book character will be remembered. For Batman, this is doubly true.

Some names you may recognize as linked with the character in the last 40 years are Neal Adams, Jim Lee, Frank Miller and Bruce Timm. Three new names should now be added to that pantheon. These are the men of Scott Snyder’s Batman. Capullo, Glapion and Plascencia have done such a splendid job of illustrating, inking and coloring Batman and his compatriots in the last 18 issues, that I may forever remember them as at least one of the greatest art teams in the history of DC comics. The lines from Capullo are always both cartoony, yet dynamic. Every panel looks like it could easily be a concept design for the next film.

Then, there’s  Glapion’s inks, which contribute to the shadowy look of Gotham and the Bat Cave. For a Family that uses the shadows to do their best work, the inks are pretty important. The gloom and doom of Gotham becomes their true home and Glapion gives them more than enough room do live and work. Then there are the colors from Plascencia which, though often muted, contribute greatly to the ambiance that I think of when I consider the caves and Wayne Manor. The look of there costumes and the coloring on them were spectacular in this issue.

Let’s now get into how much they’ve done for this particular issue. The coolest thing that I’ve almost never seen until the relaunch, was the crack in Bruce’s cowl. In years prior, especially through Adams’ run in the 70s and early 80s, it always seemed implied that the cowl was more cloth than kevlar. The ceramic cowl is more likely for someone as fight prone as Batman. Plascencia’s colors come to life here, especially on the blood-stained suits and bandages that the rest of the Family are wearing. Really, the art is the best it’s ever been in the year-and-a-half since the first issue in 2011.

If you can’t tell by now, this book is a 5/5. It would be a 7/5 if the numbering system allowed it. Though a few bits were enough to take me aback, this really is one of the best issues of a Batman book in years. The art and writing are all incredible. They don’t miss a beat, as far as epic conclusions go. The last few pages are both depressing and heart-warming at the same time. It’s a very thought-provoking book, especially for the characters. Issue 17 of Batman is perfection manifested. 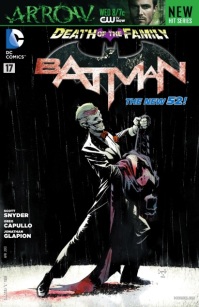 Buy Batman #17 at Things From Another World!