Matthew Malloy’s existence threatens all else.

And so Uncanny X-Men #31 brings the X-Men to the point of no return as Malloy wipes out the entire Jean Grey School, leaving Eva Bell and Professor Charles Xavier the dubious task of retroactively removing him from the picture.

Like Terminators sent to the past, Bell and Xavier go about changing the future by elimination. By making sure Malloy’s parents never meet, they prevent the volatile mutant from ever being born. It’s a controversial plotline that could possibly divide readers who’ve kept up with the series and have formed opinions about Hank McCoy’s decision to bring back the classic X-Men. 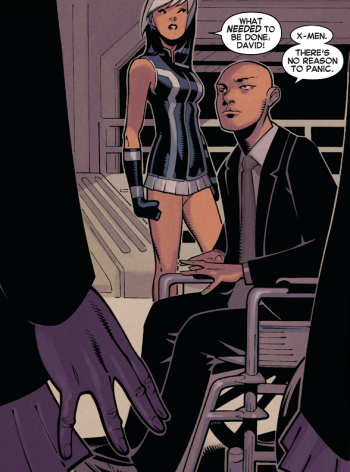 It could also have potentially huge consequences for Bell now that she considers herself “graduated” from Summers’ Uncanny X-Men group. After the reading of Xavier’s will bequeaths his entire estate to Scott, Bell confronts her now-former leader and explains what threats she prevented by tampering with time. She disappears with a warning, telling Cyclops to get with the program or risk being erased.

It’s a development-heavy issue that finally brings the story back to its focus — Cyclops. Without Malloy, Xavier’s will becomes a more simple affair that ultimately makes his accused killer the inheritor of his estate. Everything that has passed post-Original Sin has been edited out, taking away Cyclops’ move to bring Malloy under his wing as well as McCoy’s admission that Cyclops was right. It also blinks away the fact that S.H.I.E.L.D. was responsible for escalating the situation and directly killing Summers and Rasputin. We’re returned back to the bickering state of the X-Men where Cyclops is public enemy #1 and unable to get a fair trial. Everyone else besides Bell remains the same.

You would think that would make things simpler, but all of the non-resolutions leave plenty of doubt lingering. Though Cyclops’ attempt to bring Malloy into the fold ended in his own death, I’m not sure that Bell and Xavier’s decision was a more ethical or moral one. Rather, Bell’s decision to enlist the Professor in a last-ditch effort to save the X-Men results in the loss of one life by creating a time paradox that will spin-off another future timeline in which Malloy never existed. Bell will probably have to answer for her actions at some point, and the fact she was charged by future-Rasputin to put McCoy on trial creates an ironic situation. It also leaves S.H.I.E.L.D. in a shadowy place because we know how far Maria Hill will go to protect the world — as far as pre-emptive murder.

It’s clear the end is near, and the pieces are being put into place for Uncanny X-Men #600. Though I have my reservations with everything leading up to Summers leaving his team, I’m just glad to see Brian Michael Bendis moving the spotlight back towards the character who should be at the center of this title. It’s not guaranteed that Cyclops will have any sort of closure, but the possibility for a reckoning is an exciting and expected prospect. If Uncanny X-Men #600 is designed to close each character’s chapter, I wonder how much of the Uncanny X-Men issues leading up to it will focus on Cyclops long and weathered journey.

Chris Bachalo pencils the issue with a bevy of inkers — seven of them, now. There isn’t much action to speak of this issue, and Bachalo works the sequentials to highlight the ethical dilemmas that come with righting a drastic time with a drastic measure. Xavier’s contemplation as he struggles with the man that Summers becomes becomes heavier when you consider he left everything to his student, despite knowing what the future brings.

The seven inkers — Tim Townsend, Marc Deering, Wayne Faucher, Mark Irwin, Jaime Mendoza, Victor Olazaba, and Al Vey — keep things nice and tidy with intricate detailing and finishes. Bachalo and Antonio Fabela’s colors on top round out the artwork, creating a distinct set of visuals that are instantly recognizable and worthy of filling the pages of one of Marvel’s major titles.

That said, this issue will resonate in some way with readers, which makes this single issue one to remember — even if fans aren’t happy with the developments. Bendis’ story will create some mixed emotions, and it will divide groups into more camps — more than just the Cyclops is Right or Wrong teams — depending on where they choose to stand now that cards have been dealt. Bell’s assertion that Cyclops is the villain — and she and the Professor are the heroes — might rile some who would view her actions as arrogant and self-righteous, akin to McCoy’s decision to bring the classic X-Men to the present. Others might see Bell’s actions as the thing-that-must-be-done, raising her up as a sort of guardian against the actions of a Cyclops gone mad.

I’m not sure that Cyclops was really in the wrong here, and I’m inclined to believe that Professor Xavier supports the future actions of his student — no matter Bell’s thoughts. The clue comes in the novel Xavier picks up after thinking upon his own actions, T.H. White’s The Once and Future King. White’s story of King Arthur is a classic that follows the young lad Wart as he grows up to become the legendary King Arthur, leader of the Knights of the Round Table. White’s story, like Cyclop’s journey, is filled with tragedy as Arthur is undone by the evils of the world, the fallible humans in his own court, and ultimately his own misbegotten son.

In the Uncanny X-Men, Professor Xavier is Cyclops’ Merlin, Arthur’s mentor who teaches him that war should only be waged to prevent another war. Cyclops has grown into the man he’s become, partly a product of the dreams and beliefs of his old mentor. Sadly, and like Arthur, Cyclops is besieged by forces from all fronts — he is a man of virtue struggling with power, justice, hatred, and war. And for that, Professor Xavier feels responsible because he poured his life into the young man.

Which leaves the question that Xavier asks Bell, “Where did I go wrong with Scott Summers?”

If that answer could be found in White’s Arthurian legend, then Xavier’s only regret should be that Summers became the man he wished he could have been.

Buy Uncanny X-Men #31 from Things From Another World!