Trying to get back home to their original world, the various X-Men from Earth-616 seem lost without a clue as they try — and fail — to stay out of trouble.

Now that Jean and Miles Morales have crossed paths with this universe’s X-Men, it’s time for that awkward moment when the Jeans mind-probe each other. They both faint from information overload, leaving the X-Men and Miles to figure out what to do in the meantime.

Trying to escape the Mole Man’s giant mole man, Iceman discovers why his powers of no use on the surface — temperatures have hit 114-degrees in Atlanta, Georgia. After freezing the gargantuan from the inside-out, the police arrive to take Bobby into custody. What follows is a terse ride to the station as the two policeman go unfiltered about their opinions on mutants. When it’s clear the policemen have their minds made up about mutants, Bobby blasts the interior with a snowstorm and makes his escape.

At Weapon X, Laura Kinney, Warren Worthington, and Jimmy Hudson discuss time and space when Laura comes to the conclusion they’re fish out of time and space. While Jimmy believes mutants are created, Laura — who happens to be a manufactured clone — doesn’t exactly reinforce Hudson’s beliefs when he starts to understand where his new friends came from.

As for Beast — well, he gets to spend an interesting evening with everyone’s favorite doctor of doom. After being drugged with a truth serum, Hank gushes about his feelings for Jean — so much so that Dr. Doom can’t stand to listen anymore. After McCoy declares he wont’ be complicit in any nefarious plans, Doom says he has just the right thing.

All-New X-Men #34 endcaps with the two Jeans hugging it out. When classic Jean puts on Cerebro, she sees the to be continued tag.

All in all, All-New X-Men #34 pushes the plot about the original X-Men in the Ultimate universe. We haven’t seen much in terms of heroics, and this far in, things are in cruise control as the various plot threads continue their search for a distinct narrative. Of all the issues so far in the story arc, this one’s the strongest as we finally get some sort of trajectory as we see the reactions of the various characters coming into contact with our Earth-616 heroes.

I’m not sure what’s in store for Bobby now that he’s free and clear — he’s the most out of the loop regarding where he and his teammates are. X-23 and Angel are still on the search for their compatriots, and Jimmy’s reaction as he begins to see what’s going on makes that scene interesting. Out of all the plots so far, it’s Hank’s that’s the most compelling, and though it seems highly unlikely — wouldn’t it be strangely awesome if Dr. Doom decided to be McCoy’s matchmaker?

Of course that won’t be happening, and if the All-New X-Men are on a crash course with Ultimate Dr. Doom, then let’s hope we get something worth the trip to this universe.

Mahmud Asrar’s artwork in All-New X-Men #34 is his strongest so far with the series. The mirrored panels showing the two versions of Jean reacting and exclaiming AGH! works incredibly well at telling two stories at once, and the compositions are dynamic with Asrar perfectly capturing the action and expressions the story calls for. Bobby’s scene with the police has a sort of striking subtlety — you can feel the tension rising even as Bobby shows remarkable restraint. In Hank’s sequence inside the Doom mansion, McCoy bares his heart in the most tragic manner — the truth serum keeps him from lying, but it’s his broken heart that can’t keep the emotions bottled in.

The best panel would have to be the two Jeans hugging. The expression on classic Jean’s face shows she’s being comforted while Ultimate Jean’s face looks a little pained. Though they’re not the exact same person, they are sides of the same coin able to empathize and console. It’s one thing for a friend to tell us it’s going to be okay, but it’s a far different matter when you get to hold your mirror image.

The colors by Marte Gracia and Marcelo Maiolo look on point. The shadows add texture and highlight facial expressions. Gracia, in particular, adds plenty of detail to the gargantuan, giving the sequence a grittier tone that adds a sense of serious danger. I like that the flashback panels are done in black and white with an emphasis on Jean’s hair. Besides Mary Jane, there’s no other redhead who can hold a candle to Jean Grey, and while their hairstyles are different, these two Jeans are the focal point of the X-Men stories they exist in.

That said, All-New X-Men #34 is a good issue that picks up the pace on a story arc that’s been a bit of a snooze fest. While the prospect of seeing the X-Men out of their element might have seemed cool on paper, the past issues have lacked drama. Things look like they’re back on track with Dr. Doom making some moves and the X-Men making some headway towards finding some answers. 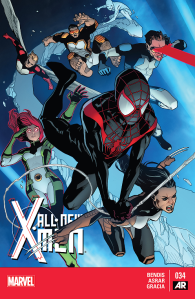 Buy All-New X-Men #34 from Things From Another World!