While the other X-Men books under Brian Michael Bendis’ control have followed squads of X-Men building on a firm foundation, it’s the one book written by Brian Wood that details the problems of a team beginning to form.

With relationships frayed over the events that came to pass last issue, Storm designates herself as leader, much to the chagrin of Rachel Grey.

Back in issue #3, Karima Shapandar regained consciousness and stabbed herself with Psylocke’s psychic blade. Only moments before, Storm issued the order to kill Shapandar and the bacteria controlling her body, Arkea Prime. Were it not for Grey, the X-Men could have lost a friend to a split decision.

Though the day ended with a checkmark in the win column for the team, questions over whether the team could ever work together under Storm’s leadership were discussed.

X-Men #4 explores the aftermath and the relationship between Ororo and the major dissenting party, Rachel Grey. Acting a little passive-aggressive, Rachel shows she’s not okay — especially with Storm naming herself as leader of this X-Men squad — and the two have it out in the passenger space of the Blackbird. 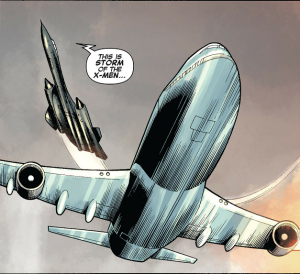 Meanwhile, a Columbiair passenger flight experiences mechanical failure out in the middle of nowhere. Psylockey, Rogue, and Shadowcat hatch a plan to guide the plane with a risky maneuver that puts the microscope on the team’s chemistry, tactical abilities, and care for each other.

A month before the Battle of the Atom crossover event, Wood gives readers a solid base that explains why this team deserves to exist. This current iteration did not choose its own members — it just sort of happened because no one else was available when Arkea Prime decimated the school. With one victory under their belt, the team realizes there’s something there and that they’ve got something good going. The women of the X-Men who’ve been relegated to supporting cast roles have a new power structure that puts them under one banner.

What makes Wood’s X-Men series interesting is the personal touch. Things haven’t worked perfectly smooth for the team which has only been together for a few days, and disagreements that could derail any team have bubbled to the surface. Questions about Ororo’s decision making abilities only scratch at the surface — it’s really an issue of trust and distance. As Storm begins to dictate orders to the team, Rachel tells her, “Trust the team.”

Storm’s leadership style has clashed with Cyclops’ way of running the X-Men team. Cyclops earned even Logan’s respect with his tactical prowess and hands-on approach. Storm usually acts as a field commander, surveying the battlefield and ordering issues from on high. Both command respect, but in very different ways. Scott Summers was the embodiment of Charles Xavier’s dream. He was one of the first X-Men, and until recently, he was predictable in a way that comforted the teammates following his lead.

The way Storm leads — she’s more like a corporate manager who would rather keep her employees at arm’s length. She’s the outsider, and her first impulse is to micromanage a team that works on instinct.

Issue #4 gets it right with great characterization and a look at how an X-Men team starts from scratch. This is the issue where the team solidifies itself, and it’s the real first official step.

Taking over for pencils to complement Wood’s scripts, David Lopez’s style fits right in where Olivier Coipel left off. The artwork isn’t as attractive as Coipel’s, but it does capture the action well, especially without much explanation of what’s going on in the narrative.

Characters follow current designs, and they’re easily distinguished. Where Lopez contrasts with Coipel are the expressions. This issue has an overabundance of smiling X-Men, and the parallel story involving Wolverine and Jubilee tracing her roots depicts Logan on what looks like one of his happiest days — he’s shown smiling in all but two panels.

Lines look clean, though there are some blotchy shadows, especially on Storm’s face and on the women’s lips. It’s possible Cam Smith and Norman Lee split duties — one inker on the Wolverine/Jubilee story, and the other on the bulk of the book — and by the looks of it, the Jubilee story has the cleaner and more defined lines.

X-Men #4 works because it covers the rounds. There’s action, a sense of newness and exploration, and psychology. This is a team looking to take a stand, and as sum of its parts, it’s pushing and pulling all at once. There are dynamics that create a palpable tension within the team, and though the narrative could have been a wee bit stronger, it’s the action that really speaks louder than the words.

Buy X-Men #4 from Things From Another World!