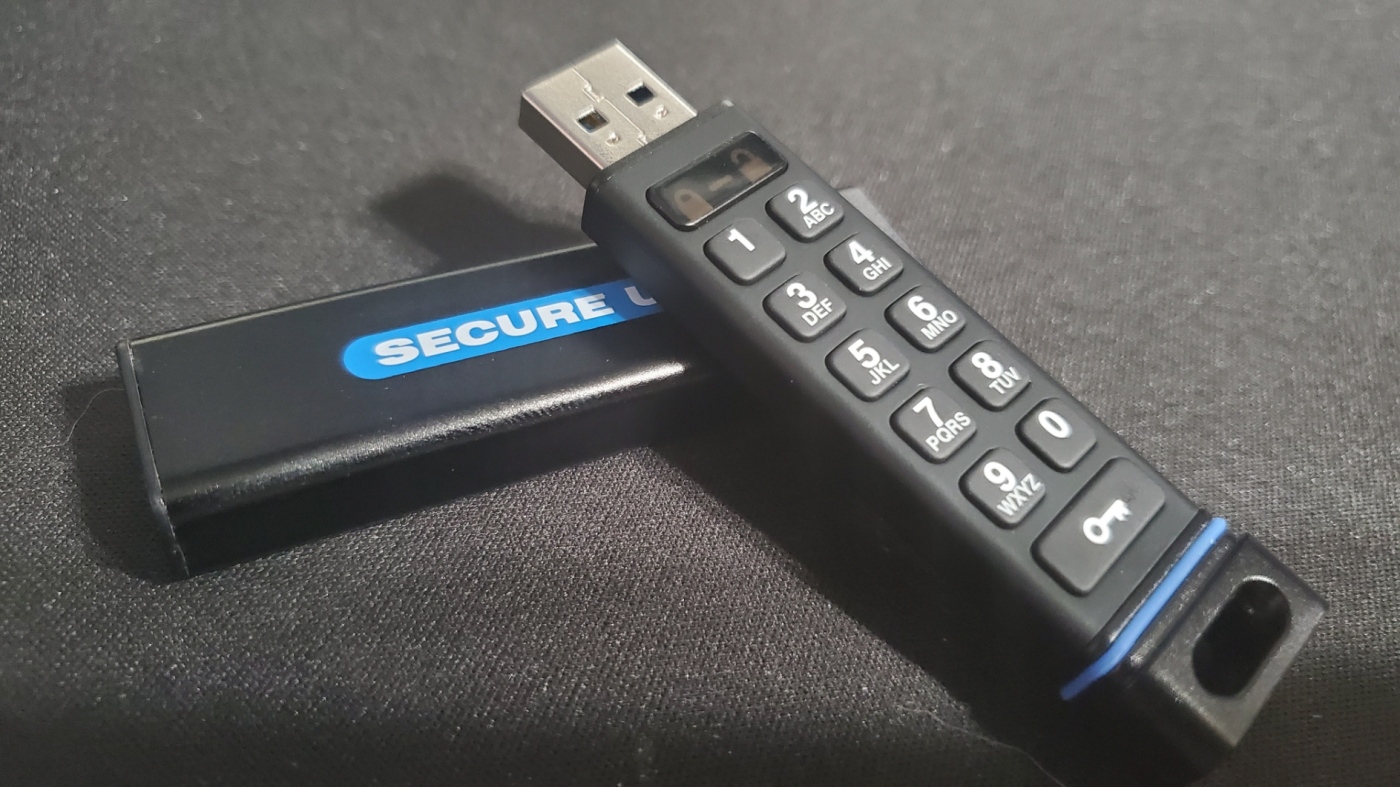 Attache
If you’ve been following the website the past few months, you’ve seen several of my reviews for SecureData’s line of protected drives.

The opportunity to test and use the company’s products has been an amazing opportunity to delve into the world of secure data storage, and I’m honored to have been sent another drive for review — the SecureUSB KP flash drive.

While I’ve put the SecureDrive KP into my EDC (everyday carry) kit because it hits a sweet spot for me in terms of carry and drive size, I haven’t found as much use for either of the flash drives I’ve reviewed — the one from SecureData and the other from iStorage.

That’s not to say either of those flash drives are useless — they’re fantastic tools that some will find very, very useful depending on need and necessity.

Now that I have the SecureUSB KP in my hands, will the combination of portability and onboard security be enough to put this in my go bag — or will it be relegated to occasional use?

Built for security
SecureData’s products are designed to be the best at what they do, and I haven’t found anything to suggest they’re not worth every penny.

The SecureUSB KP — is it safe to assume the KP stands for keypad? — comes with a metal sheath that slips over the drive like a lipstick case. The drive itself has a soft feel to it; it feels almost like a layer of rubber. The base is hard plastic, and it can be attached to a keyring or lanyard.

An IP57 certification designates the drive as dustproof and waterproof up to one meter, which means it’s built to last.

In terms of what’s inside — the hardware encryption is AES256-bit XTS, which means it’s nigh-impossible to hack with current technology. If you’re worried that taking the drive apart would be a simple workaround to hack into it — imagine the surprise any would-be hacker would feel once they’ve popped off the shell to discover the inside of the drive has been covered in epoxy.

The SecureUSB KP also contains a 3.7v lithium-polymer rechargeable battery for pre-plug code input. The battery charges while it’s plugged into your computer, but if it’s anything like the iStorage drive I reviewed a while ago, the battery will die if it hasn’t been used too long.

As with the other products I’ve reviewed, the SecureUSB KP reacts to brute-force hacking by deleting its contents after 10 consecutive failed log-in attempts. And like the SecureDrive KP, the keypad is also wear-resistant to keep it from becoming a liability to deductive hackers.

There’s also an admin mode with a separate pin that gives you another tier of control on top of the regular user mode. With the admin pin, you can loan out the drive or give them out to employees. In the event an employee leaves the company, you can unlock the drive with the admin password, reset the user password, and hand out the drive to another employee.

With admin mode, you can also set a drive to read-only, which allows those who receive the drive to see the contents but not have any editing rights.

Admin pins can be created by using a combination of button presses that make it a tiny bit more difficult to do.

Niche
As a teacher, security is a huge concern because student data needs to be protected. I can imagine being given a drive like this with IEPs and 504 plans that are meant to be stored somewhere safe and pulled out when necessary.

On a day-to-day level, I don’t know that I would use this much for personal use — at least not at the moment. With everything being online and in the cloud, my students receive materials from me through a learning management system that lets me upload a single file that can then be posted to an assignment and automatically duplicated.

And even if we were to go back to school tomorrow, I don’t see the SecureUSB KP’s best use-case scenario as a deployment device in which I go from computer to computer giving students files. Information can be spread much faster through the cloud, and student accounts are locked with online passwords that are already pretty difficult to hack.

In situations when I may need to let someone borrow the drive, or I need to physically deliver offline programs or documents to someone via a flash drive, the SecureUSB KP beats both the SecureDrive KP and SecureUSB BT. The hard drive would be a considerable loss if it were to be misplaced, and with the amount of storage available, I might not want someone rummaging about. The USB BT, on the other hand, requires an app downloaded onto the phone belonging to the person using the drive, and that could be an inconvenience if, say, a person didn’t have a smartphone or access to wi-fi.

With the USB version of the KP, it’s as simple as writing down the code and handing it off. That gives the KP a nice niche. Where the larger drive serves as a portable hard drive with a robust security feature that likely will not change hands, the smaller flash drive can be used as an escape pod of sorts for when you need to hand over files, programs, photos, or videos.

And while the drive isn’t so cheap as to be disposable — the 16GB version I was sent retails on the company’s site for $109.99, which is $10 cheaper than the BT version of the USB drive — I would rather lose the USB drive over the larger KP hard drive, though I’d prefer to lose neither.

The price also makes it a buy if you absolutely need it. I don’t think many people will pick one of these up as an impulse buy seeing as how other 16GB drives go for a lot less.

For those who need it, the SecureDrive KP works.

So, does the SecureUSB KP belong in my go bag — I would say, yes. While it won’t get much use day to day or even week to week, it will get used when someone needs a large file that can’t be downloaded or if a student needs to move their files from one computer to the next.

This review is based on a review-sample 16GB drive sent to us from the company.