Though I bought the first issue of Wonder Woman’s New 52 reboot, I didn’t put the title in my pull list — something I regret after all the good things I heard about Brian Azzarello and Cliff Chiang’s esteemed run.

The new creative team — Meredith and David Fincher, married — have pretty big shoes to fill, and while I’m approaching this title as a total noob, I hope this offers some perspective of the title from new eyes.

Wonder Woman #36 kicks off with a few pages exploring the various natures of water. “It nourishes and sustains life,” Meredith writes, “but it can also bring devastation and death.” Panels depict small villages destroyed by floods, a clay statue, and a dam breaking apart as a mysterious figure watches another village wash away.

On Paradise Island, things are tense as the female leadership discusses what to do with the influx of males who were previously banned. Diana Prince, the new Queen of the Amazons, has apparently shunned ancient rules, making changes that some believe will cripple the Amazons. While the woman argue, Diana travels to Thailand with the Justice League to investigate the sudden disappearance of villages all over the world.

As Swamp Thing tries to make sense of it all, Wonder Woman ambushes him, believing he’s the culprit. The battle is brutal as Swamp Thing takes several hits that tear apart his body, but he remains reasonable in the face of sudden anger and restrains Diana long enough for her to calm down and listen. Aquaman, just as perturbed by Wonder Woman flying off the handle, uses the flight home and the one-on-one time to find out what’s really bugging her. It seems Diana’s under a lot of pressure, and the stress of juggling her roles and duties as Queen of the Amazons, God of War, and member of the Justice League is getting to her. It also doesn’t help that her mother is a clay statue, and Paradise Island tensions are rising as the women figure out how to live with the men.

The one thing Diana’s talk with Aquaman doesn’t answer is why any of that justified a surprise attack on Swamp Thing. It’s the second most glaring thing about the issue, and it’s one of those things a superhero would look back on and wonder, Why did I do that? It just seems incredibly irrational for someone to jump into a situation and breaking apart another living thing’s body, especially when it’s completely unwarranted and on a pretense.

The most glaring thing about Wonder Woman #36 is David’s character design, and I’m talking specifically about Wonder Woman. The pencils, overall, are detailed with some well-composed sequences. Swamp Thing is an amazing sight to behold, rendered with extraordinary line work that looks like David took a lot of time and care in getting it right. The fight between Wonder Woman and Swamp Thing produces the best pages in the issue, and inker Richard Friend’s finishes are bold and beautiful. With some clever shadow work that really brings the sequence to life, Sonia Oback’s colors are reminiscent of some of Mark Brooks’ covers with their bronzed finishes, and context aside, the action scene is a marvelous one.

But for the rest of the issue, David’s doll-eyed Wonder Woman looks more supermodel than superhero. Despite being an Amazon, Diana somehow manages to look short and unimposing. Though we shouldn’t always judge a book by its cover — David’s Wonder Woman looks great in action but miscast, otherwise.

If this is the new status quo for Wonder Woman, I’d say I’m a little disappointed because of my own expectations for how Wonder Woman should look and be. On the story side, I’m not the only one with a problem — it’s Aquaman who points out Wonder Woman’s uncharacteristic rage-out. Meredith’s explanation unfortunately digs a deeper hole for Diana whose reason for beating up acquaintances is because stress. Looking at the rest of the issue, I think it’s apparent that Meredith can write, and she has a clear handle of voicing, pacing, and keeping readers up to speed. The cliffhanger at the end of the issue has weight, and I am looking forward to the next issue to see what kinds of development Meredith can create.

On the art side, I just wish David didn’t opt to mold Diana in his mind’s eye image. She looks too much like David’s other comic book women, and if there’s one female superhero who should break the mold, even if it’s against our modern-day standards of beauty, it’s Wonder Woman. To me, Wonder Woman should embody an aesthetic fit for her as a representation of the warrior-woman — an Amazon whose beauty is a match for her strength and class and not the other way around. That said, while this first issue might not fit my version of Wonder Woman, it does display some great imagery. If Meredith’s story rises to great heights, David’s pencils won’t let her down. 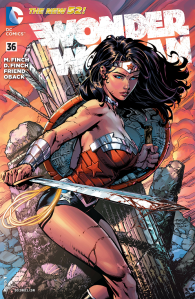 Buy Wonder Woman #36 from Things From Another World!