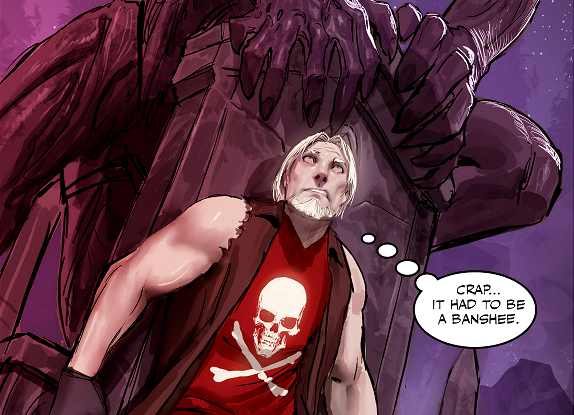 What if death wasn’t a given — what if it could be the beginning of something else?

That’s the basic premise of Stjepan Sejic’s Death Vigil, a new series where Death recruits soldiers in a hidden war against primordial forces trying to destroy the world. Think HP Lovecraft meets Hellboy, and you’ll get the gist of a comic that’s equal parts comedy and horror.

The story follows Sam, a man who dies a heroic death on Halloween when he pretends to be a cop during a robbery. Drafted into the Vigil, Sam becomes The Digger, a warrior for life whose two weapons of choice are a shovel and a pickaxe.

Sam’s also a pretty sensible guy — his ability to quickly pick up bits of information and gauge situations, physical and emotional, makes him one of Death’s favorites. Twelve years after he left the land of the living, Sam’s been busy protecting it even if his efforts don’t make him or his cause known. When a trio of goths try to summon Death, Sam appears and heckles their leader. It’s not the potential for danger that brings Sam there, it’s more the principle — if the wannabe summoners only had an inkling of what lay beyond the Veil, they’d be quick to put their efforts into something more beneficial, or at least productive. 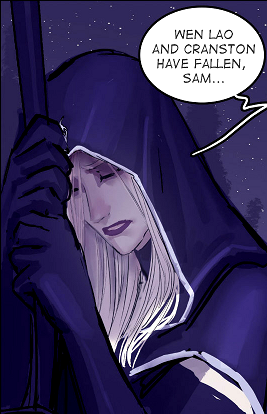 Ultimately, the ungifted and misguided goths don’t pose a real threat, and Death — her real name is Bernadette — shows up to warn Sam about necromancers who’ve been targeting new Vigil recruits. The necromancers are after Veilrippers, the special weapons Vigil members wield in battle, and they’ve just downed two more of Death’s friends.

When Jon, a fledgling ‘mancer, brings his girlfriend Clara to the cemetary to visit his dead father’s grave, things take a turn for the worse when she becomes his sacrifice. Sam jumps into battle and almost loses the battle. Death comes to save the day, and the Vigil gains a new member when circumstances force Clara to choose death or an eternity as a warrior for life.

Death Vigil #1 is an over-sized issue that packs in a lot of characters and a glimpses into the larger mythology. As a one-man team, Sejic’s vision really comes through for the title in both scope and execution. The artwork is beautifully rendered, and Sejic’s designs are wonderfully creative, favoring function as well as form. Take a look at the banshee, and you’ll see something designed that doesn’t rely on traditional images. It’s a sort of amorphic monstrosity with three heads, giving it a triple threat when it sings.

And what’s even better — when Death appears to save the day, it’s hinted that her true form isn’t all sunshine and lollipops. It’s a great plot twist that gives the Vigil some clout by showing they’re nothing to be trifled with either.

So when it comes to horror, which is a daunting genre to write for because it’s a challenge to think outside the box and genuinely surprise people, Death Vigil’s visuals give it great support. What also works for it is the angle — this has the reachings of a fantasy or sci-fi novel that’s filled with lore, history, and characters. Since it takes place in two realms — living and otherwise — it’s got a lot of resources to mine and lots of stories to create.

The art is the issue’s greatest strength, and the scripting is almost there. Because there’s a lot for Sejic to cover in terms of shaping and building this world as quickly as possible so readers can start getting acclimated to the various mechanics, the pacing has to be solid — which for the most part, it is. There’s a huge snag at the climax when Sam’s defeated and about to die. Death appears along with Raven, and they go to town on the banshee. It’s a bittersweet moment that, on the one hand, shows how powerful Death and Raven are, but it sort of relegates Sam into a lesser position — a position that gives him a mighty and convenient reset button. The main problem is that we know the story’s about Sam and Clara — but our attention is diverted to a character in Death that might be the more compelling of the three.

As for dialogue, Sejic’s got a talent for building likable characters, and Sam and Bernadette’s relationship, which is thankfully more mentor/mentee than romantic, reads like it has a lot of history behind it. It spotlights one of the great things about Death Vigil #1 — it’s a very face-forward story that presents itself with the sort of urgency you’ll find on a pilot episode that’s hoping to be picked up. It translates very well — it’s easy to pick up and get into — and you’ll be amazed at the clarity of it all which goes to show how thought out the plot elements are.

I doubt subsequent issues will have page counts this high, and I’m interested in seeing what Sejic will do with 20 pages. This is a comic that appeals to fans of various genres — it’s got undead vikings, macabre villains, and tons of potential for imaginative world-building. It has an ebb and flow that knows when to build and when to dip. Were it not for that one plot element concerning Death saving Sam, I’d be hard pressed to talk about flaws — and when I think more about it, that plot point seems to serve a purpose that might read better once I’ve read future issues and come back to it.

Sejic shows you don’t need an entire team to create a comic, and for that, I commend him. His all-in-one approach works because he’s taking full ownership of the story, art, and the world that Death Vigil resides in. All the blame falls on his shoulders. And when it’s applause — the prestige is his alone.

Right now, he’s being called back for an encore.