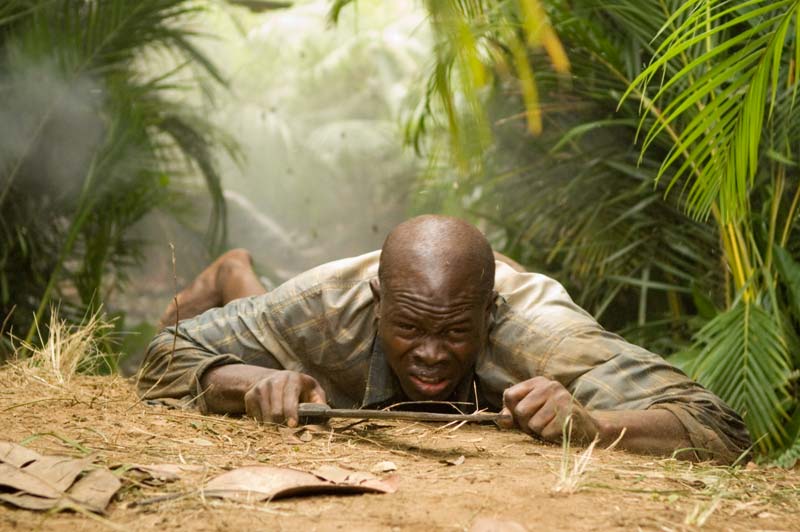 Diamonds — they’re a cultural phenomenon that have made their way into the hearts of minds of people through marketing campaigns proclaiming diamonds to be, among other things, a girl’s best friend.

Those who’ve justified buying a large engagement ring with three months’ salary might have De Beers to thank. The company has mastered the art of marketing campaigns — their slogan, A diamond is forever was named best advertising of the 20th century by Advertising Age magazine.

Much has been said about the true worth of these rocks, and as the general public reads up on the issue of conflict diamonds, there may come a change in the perception of how some of these diamonds are obtained — are they more precious than lives?

Blood Diamond bases its entire premise on conflict diamonds and the hidden cost of getting these gems.

Solomon Vandy (Djimon Hounsou) rushes home with his son to rescue his family from rebel militants intent on recruiting child soldiers. Vandy is captured and held as the rebels cut off the arms of young men to keep them from voting.

Vandy is fortunately spared the fate — he’s forced to work near the river at the diamond mines under the employ of Captain Poison (David Harewood) who proclaims that all the workers are truly free before he guns a man down for hiding a diamond in his mouth.

When a government raid captures miners and captors, diamond smuggler Danny Archer (Leonardo DiCaprio) overhears Poison accusing Vandy of stealing a giant pink-tinged diamond that could be worth millions.

For Vandy, the diamond means freedom for himself and his family. For Archer, it’s enough money to pay off his debtors and get passage to another country.

Jennifer Connelly stars as Maddie Bowen, an investigative journalist with enough pull and resources to help both men in their search for things valuable to them.

It’s an action packed adventure story that winds through several locales which keeps the movie fresh. There’s a sense of movement and direction as the story weaves through politics, drama, and character development.

It’s tactfully and tightly directed by Edward Zwick, and the movie manages to put a point across without feeling condescending, preachy in the negative connotation, or winded. Hopefully, the movie will hopefully show people that some diamonds are worth about an arm and a leg. Literally.