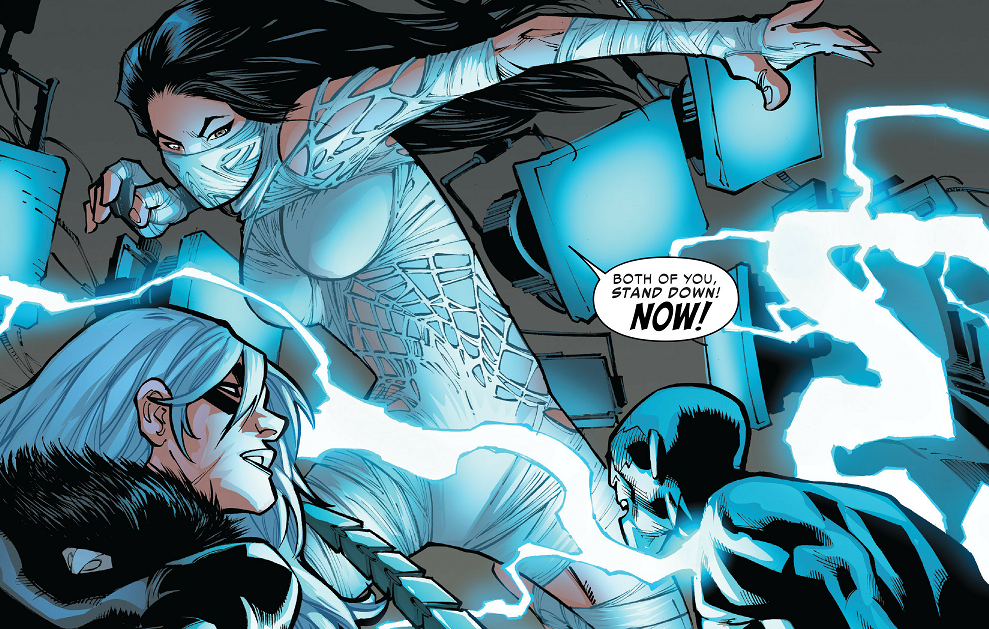 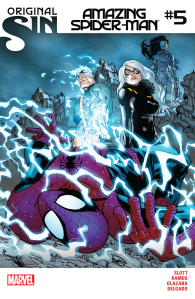 Lady Luck serves up one icy-cold serving of vengeance in The Amazing Spider-Man #5.

Felicia Hardy continues her brash streak to rebuild her reputation. Previously notorious as a cat burglar with a taste for the high-life, Hardy’s humiliation at the hands of a Doc Ock-possessed Spider-Man caused her star to fall.

So with the help of Electro, another criminal who’s fallen on hard times, the Black Cat supplants the Eel’s position as a New York City kingpin and declares her intention to defeat, once and for all, the Spider-Man.

As for Parker, he’s been unable to control his urges for Cindy Moon, aka Silk. The same spider that bit Peter managed to also bite another, and last issue, we were introduced to Spider-Man’s female counterpart who had been locked away by Ezekiel.

Now freed, Moon has no intentions of going back, even if it brings Morlun to New York to eat the two of them. Their positions are pretty precarious, and it all comes to a head when Felicia and Max attack the Fact Channel’s studio as Parker goes on for an interview. 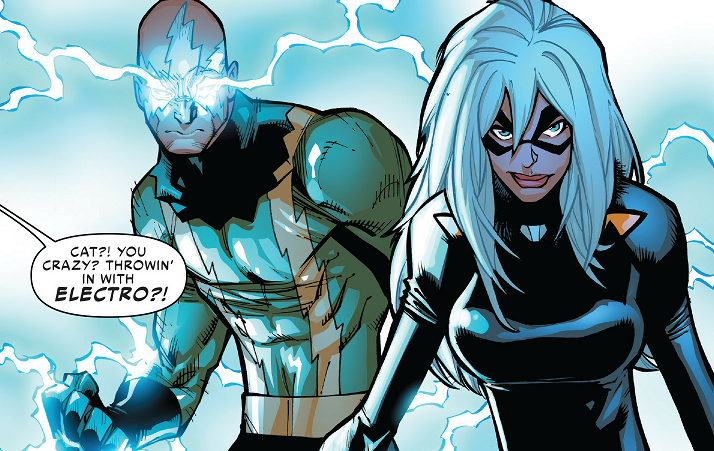 Silk makes her debut on camera before Parker finds an opening to don his suit and join the fray. By sheer luck, a spark misses Felicia and hits Spider-Man, causing him to lose control of his body. With all the cameras pointed at him — and J. Jonah Jameson providing commentary — the Black Cat begins to remove Spider-Man’s mask for the world to see.

The Amazing Spider-Man #5 is definitely a lot of fun, and Dan Slott knows how to write a crisp comic that hits the right beats.

With so much to cover, the issue in less-skilled hands could have devolved into a convoluted mess. In the span of 20 pages, we follow Felicia as she conquers, Parker and Moon as they explore each other, Jameson as he schemes his way back into the spotlight, and a major battle with the possibility for huge ramifications.

And there are plenty of other scenes in addition to all of that. As densely packed as The Amazing Spider-Man #5 is, it doesn’t feel too loaded. Slott doesn’t waste his time stuck on particulars or stuffing pages with extraneous content. The issue is a case-study for efficiency, timing, and pacing that revs up when the action kicks in.

Humberto Ramos on pencils looks like he’s up for the challenge — I’m a big fan of Ramos’ art already, but the pencils this issue look like he kicked it into an extra gear. There’s a lot more detail, plenty of oomph in the expressions, and the panels are just packed with movement. Take a look at each individual panel, and you’ll notice how each one sort of bulges with all of the content.

And that probably makes Victor Olazaba the hardest working inker in the business having to take on all of it by himself. Even plain backgrounds get a smothering of cross-hatching to produce a vignette that draws the eyes towards the characters.

As for color, Edgar Delgado puts the finishing touches on the visuals with some heavy emphasis on the elemental work. Lightning bolts, fire flashes, and some romantic nighttime shades for Parker and Moon’s rooftop tryst — each scene has its own schemes that shifts the book into different modes with each particular environment and atmosphere.

One of my concerns with it all is that the story sort of lacks that extra bit of excitement in the cliffhanger. Spider-Man’s identity has been something that’s been revealed, hidden away, and etc. numerous times.

It’s also like Slott’s been handed particular pieces — Original Sin being one of them — and the plot has to touch base with each one of them. While the issue doesn’t feel rushed, it sort of glides from start to finish, hitting flags as it goes. You just wish for something that would really stick.

That said, The Amazing Spider-Man has been pretty amazing thus far. It’s entertaining, well-written, and beautifully visualized. Its ambition seems to be its biggest detractor as we’re sort of led through the story at a quicker pace than our thoughts and our emotions can follow.