With regret, I have to say that Uncanny X-Men #34 made me question what Marvel’s intentions are for the X-Men series as a whole, especially with Secret Wars creating a brand new universe.

While the Avengers get top billing as Marvel’s flagship team title, the X-Men have languished in each of Brian Michael Bendis’ series — All-New X-Men and Uncanny X-Men. Both of the X-titles started off strong only to devolve with backpedaling time-shifts, hamfisted conclusions to crossovers, and out-of-character developments that seemed incredibly counter-intuitive to the story at hand.

Uncanny X-Men #34 brings Mystique back into the mix, but the issue ends up serving as a prime example of the title’s flaws. Sad to say, the latest issue all but made me lose hope — I’m still unsure who deserves blame for this lazy mess of a book, Bendis or Marvel? — and I am afraid to see what will happen in Uncanny X-Men #600, which was delayed four months into October. That issue, which will presumably conclude many of the storylines and bring them up to speed for whatever Marvel has planned in the future, might end up being another broken cog in the derelict X-Men zeppelin burning to ashes as it crash lands.

Within the S.H.I.E.L.D. helicarrier that serves as Maria Hill’s base of operations, Dazzler demands all the information they have on Mystique. Hill mentions it’s classified information for S.H.I.E.L.D. operative eyes only.

“You never technically quit,” Hill responds, basically agreeing with her.

It’s the kind of dialogue that spins in circles — two characters who seem to be arguing for the sake of arguing. Regardless, Hill gives Dazzler all the files, and that’s all it takes to find a shape-shifting mutant that even Cerebro can’t locate.

I mean, seriously — it takes eleven panels for Dazzler to track down her target, and whatever tipped her off never gets explained. Instead, we’re brought back to Mystique’s apartment where Scott basically sums up the catalyst for Mystique’s rampage — Charles Xavier’s death.

When Mystique wonders how Scott found her at all — which makes us wonder — it turns out the entire thing is a ruse. Scott isn’t Scott! It’s Dazzler disguised by the Stepford Cuckoos’ mind trickery!

The team formerly known as the Uncanny X-Men help Dazzler apprehend Mystique, and the day is won. Dazzler throws a concert, Hill persuades her to rejoin S.H.I.E.L.D, and the young mutants decide to drop the team name X-Men for presumably something 21st Century Fox can’t touch.

Besides and in addition to Dazzler’s unexplained needle-in-a-haystack discovery of Mystique, Uncanny X-Men #34 basically serves up a whole lot of nothing disguised as some sort of progression. The small morsels of characterization produced from Dazzler-Scott’s couch-therapy provide miniscule amounts of development that prove frustrating because none of it really comes straight from Mystique. And whatever we learn this issue, we already knew. Of course she’s alone and uncharacteristically extremist — that’s been a given, especially after what she put Dazzler through. What we want to know more about is Mystique’s relationship to Xavier which became a moot point somehow after Eva Bell’s time bending. The issue also refuses to answer the question it presents when Dazzler-Scott asks, “What do you want?”

What we get is a steam-roller “I got you” ending between Dazzler and Mystique that doesn’t hide the fact readers have been robbed of real and meaningful closure. Dazzler’s been wanting this for months, and there’s a lot left on the table at the end of this.

And while the plotting and scripting fall flat and go nowhere, I’m glad that Kris Anka’s artwork brings a lot of emotion to the panels with some spot-on expression work. I still think his art style is a bit simple, but the strengths are played up in an issue as drama-heavy as this one that brings it in for closeups during dialogue. Anka also shows a lot of diversity by giving us Mystique as several other characters.

The colors by Marte Gracia also give the pages incredible weight — the tones are dark and saturated without going overboard. Mystique’s blue skin contrasts well against the red in her hair, and the atmospheric and environmental lighting follow in line with the tone of the story.

That said, I’m ready for any new start to the X-Universe, though I hope the major plotlines get the endings they deserve. Uncanny X-Men #34 feels like another attempt to stall for time, and it’s a shame that Mystique’s “ending” doesn’t amount to much more than her being captured while she’s been working as an actress. This seems like a slow and meaningless death of the X-Universe as major plotlines flutter in the wind, and in light of the rumors about Marvel killing off the mutants in its universe for the time being in order to bully Fox into sending the movie rights back, I can’t help but feel like the fans are ones who are really going to suffer for this. 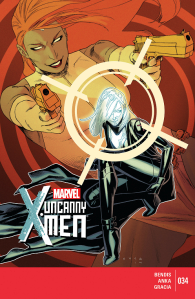 Buy Uncanny X-Men #34 from Things From Another World!