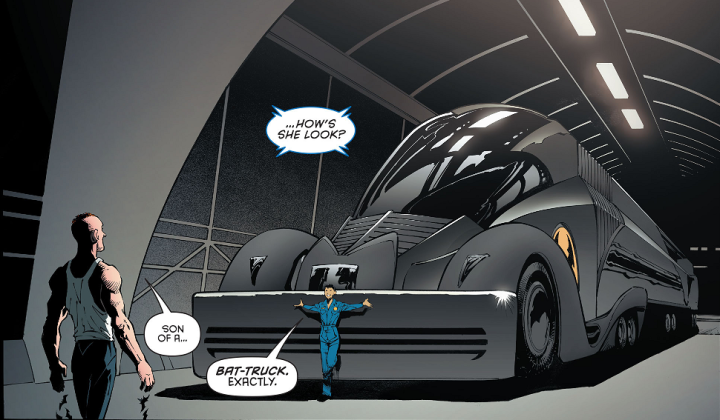 Batman takes on another super-powered thug in Batman #42, and it’s beginning to look like a new villain has arrived in Gotham City to challenge the new Dark Knight.

Last issue, Jim Gordon took on the mantle of the Bat and fought against Precious Precious, a low-level thug exhibiting some strange powers. Issue #42 follows the same sort of trajectory with a similarly plotted story — Gordon goes toe to toe with another low-level thug who has somehow gained a powerful ability.

Gordon answers the call to take down Gee Gee Hueng, a local Triads leader who can control silicate. Gordon tactically outmaneuvers his opponent and beats him into submission. Before he succumbs to the radiation poisoning brought on by the “seed” that gave him his power, Hueng names Gotham’s newest baddie: Mr. Bloom.

The same kind of seed was found on Precious Precious and several other bodies found by the GCPD. Each body had been given a sort of power, but each victim experienced the same kind of burnout. It’s clear Mr. Bloom has been experimenting and developing these seeds in order to expand upon a criminal network, but before Gordon can push the investigation any further, he’s forced off the case — the GCPD will handle pursuing Bloom until Batman’s needed to come in and apprehend the criminal.

I’ll give Scott Snyder credit for approaching this new story arc the way he does. Batman #42 is straightforward and much like its preceding issue, and for good reason. Snyder is treading new territory — one without Bruce Wayne — and he isn’t reaching into the rogues gallery for a tried and true story.

This is something fresh and new, and we get to see someone else take on Batman’s responsibilities step by step. As we follow Gordon walking a mile in Batman’s shoes, we come to appreciate the mythos more because we know — yes, we know — Gordon can’t hold a candle to Wayne as Batman. That leaves us relating to Gordon as he tries to meet the high standards of his predecessor. It’s a crash course in Batman 101 as Gordon struggles to quit smoking and hit targets with his batarangs.

The comparisons don’t end there. Gordon doesn’t even have a batmobile, though that’s addressed when Julia and Daryl turn on the lights and show Jim his new Bat-Truck. It’s ridiculous in size and scope, but this is an all-new government sanctioned Batcop who patrols the streets in a mechanized suit.

Greg Capullo’s artwork does a lot of heavy lifting, especially during the action sequences. Hueng’s ability to control silicate, a material found in brick and building materials, grants him some amazing abilities. When Hueng molds a silicate batsuit for himself, the irony isn’t lost — we get to see two wannabe Batmen fighting for supremacy. Danny Miki gets to ink all of the substrate details, and FCO Plascencia’s colors set the scenes apart. 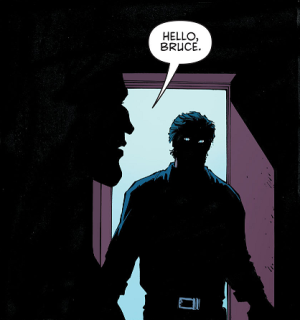 I’m not entirely sure what to make of the last act in which Bruce Wayne makes an appearance at Duke Thomas’ school as their janitor/technician. That Gordon also appears to start a conversation with Wayne leaves the issue on a cliffhanger that will likely lead to a lot of speculation.

At this point, I’m sold on Gordon because I know it’s temporary, and it’s an interesting direction. This storyline gives the creative team a lot of leeway to change things up, like the new batsuit and Bat-Truck which are the stuff of alternate universes. I’d like to see a little less explication in the scripting — when Gordon starts to battle Hueng, we get a full detail on Hueng’s background, the gang he’s affiliated with, along with some history of the sub-dermal horns that identify the members of Hueng’s Triads division. It seems a little unnatural and breaks the flow of text. It also happens again when Julia breaks down Hueng’s powers. I don’t mind being spared the full details — a bit of mystery is a good thing.

That said, Batman #42 is another solid entry. Wayne’s appearance in the book adds a nice twist that may give fans clamoring for his return a nice glimmer of hope. Given Snyder’s track record, I’m excited to see what happens.

You should be too. 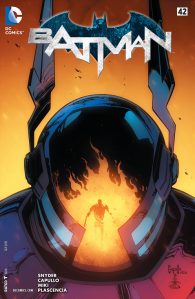 Buy Batman #42 from Things From Another World!