The masking will not be televised.

J. Jonah Jameson’s knack for getting in his own way — possibly boosted by Black Cat’s bad luck powers rubbing off on him — keeps Peter Parker’s face obscured long enough for Silk to cover him up. In the chaos that follows, Silk and Spider-Man escape, leaving Felicia and her partner Electro scrambling for another plan to defeat our resident super spider and his partner.

Speaking of partners, Sajani Jaffrey gives Felicia Hardy all the information she needs to disrupt Parker’s demonstration with the chief of police. Peter’s company has been working on several projects to rehabilitate and cure supervillains, and they’ve developed a fix for Electro’s unstable power spikes.

Amazing Spider-Man #6 is an action-packed issue with plenty of story progression that doesn’t abandon the the other good bits that have made Dan Slott’s current run a lot of fun. Issue #6 is the last issue for the current story arc, but there are still plenty of things to look forward to, like Felicia’s return — or shall I say, rise — to prominence amongst the criminal elite. Her team-up with Electro put her in bad company in the eyes of her peers, but a supposed “victory” against Spider-Man, the depowering of Electro, and some good old-fashioned sabotage that tables the proposed Parker Industries-led prison puts her in a position she’s never held before — Queenpin. 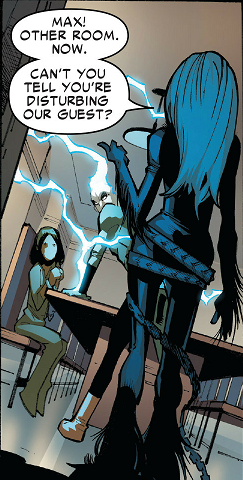 And now that we’ve been fully introduced to Silk, I think her presence in the Spider-Verse adds another dimension that builds up Peter’s set of allies non-Avenger affiliated. I say that with a little bit of reserve because her success will be determined by her forthcoming appearances. As Cindy Moon, she takes an internship at the Fact Channel that gives her the resources she’ll need to find her long-lost family. It feels like an homage to Superman and/or a nod to Peter Parker’s freelance photography days. Some might find it a bit derivative, but I think it works because of Slott’s writing style which is lighter than the doom and gloom fare of other current comic book titles.

The scripting emphasizes heroics against sticky situations with a good amount of brevity to go with the hijinks. That gives penciler Humberto Ramos a lot to work with during the action scenes.
Ramos’ artwork is polished and fun to look at, and it helps that Slott’s loaded the pages with various characters. Victor Olazaba on inks and Edgar Delgado on colors round out an excellent squad that’s maintained a level of cohesion that shouldn’t be taken for granted. If there was anything to point out as a critique for the visuals — it’s the design for Silk’s current costume.

Granted, it’s hand-spun, the wrapping looks a bit mummyish, and the white color of it sort of turns the pages with Electro’s lightning shocks into mashed potatoes. I’m hoping she gets a legitimate costume or villain with a contrasting scheme that will give the panels something with more color balance.

Looking at where I stand with the title, I’m interested in seeing where things go and what’s to be added to the mix. Cindy’s presence as Peter’s new love interest, on reflection, has done an interesting thing, and other readers might find themselves with a very different reaction that could determine whether they enjoy or will enjoy the series. Parker’s had several love interests over the course of his crime-fighting career. Gwen Stacy was killed, Felicia Hardy is now a nemesis, and Mary Jane Watson has moved on.

One question is whether Slott’s moving our favorite webhead into another direction, like writers past who introduced new love interests. Perhaps it’s time for Spider-Man to finally get a spider-counterpart that connects with him on more levels than just his civilian side.

It could also very well turn out that absence and contrasts make the heart grow fonder, and Peter comes to his senses and rushes back into Mary Jane’s arms.

No matter how you might feel about the current situation, let’s not forget why we love Spider-Man in the first place. He’s more than just a superhero with a sharp wit. He’s that nerd struggling to shoulder the weight of the world on his shoulders.

And lots of hot dates.

Buy The Amazing Spider-Man #6 from Things From Another World!