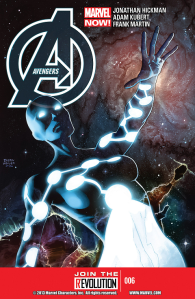 A few issues ago in Avengers #4, a larger and mightier version of Earth’s mightiest heroes gathered on Mars and battled a mysterious trio of extra terrestrials led by Ex Nihilo.

The battle on Mars escalated until Captain Universe appeared, proclaimed she liked pie, and then ended the conflict single-handed.

After two issues exploring the origins and personalities of Hyperion and Smasher — the newest versions of those characters — Jonathan Hickman puts the spotlight on the newest Captain Universe in Avengers #6.

Shang Chi’s mission in this issue deals less with the Captain Universe manifestation and more with the host hidden inside, a woman with amnesia named Tamara Devoux. As Devoux and Shang Chi work together to recall the last thing she remembers — a car crash — Shang Chi gives Devoux news that she’s been in a coma for the last 10 years, and no one knows where her daughter is.

The shock of the sudden and painful realization she’s been in a hospital for a decade pushes Devoux back inside Captain Universe who then tells Shang Chi that both the host and the power manifesting itself in Devoux are dying.

Captain Universe explains that Earth is critical because of its position within the multiverse, and the being previously dubbed Blackveil by Tony Stark has its true name revealed thanks to Captain Universe’s ability to give it the power to speak English.

Avengers is moving forward again after spending the past two issues delving deeper into characters who will likely feature somewhere, somehow down the line. While issue #6 also focuses on a new character, the plot points involving Captain Universe and its host that point to an immediate and urgent threat that could destroy all life could be the reason for justifying the Avengers title’s premise which is building a bigger team to deal with bigger threats.

Spider-Man makes a cameo in a little situation involving Sunspot, Cannonball, and eating food from the Avengers fridge. While it may seem a bit trivial, it probably has some meaning — it might answer the question on which Spider-Man (Amazing or Superior) is currently on the Avengers roster.

It’s a definite step up for the title as it feels like the wheels are back on the pavement.

The story Hickman says he’s writing is being unveiled piece by piece, but the question of the moment is: will the payoff be worth the wait? There are more questions than answers, and the mystery feels less like the hold-you-in-suspense type and more like the dragging-its-feet variety.

The art is solid, though there are inconsistencies concerning symmetry, the quality of pencils from panel to panel, and detailing or the lack thereof. Adam Kubert’s characters are well drawn — most of the time — and Frank Martin’s colors add dimension. The biggest fault in the artwork concerns how static things look. Characters sit, stand, and pose — they don’t really move, and while the story gets charged up this issue, it’s a shame the artwork didn’t give the story the pacing or emotion it deserved.

At the end of the issue, the 26 letters of the Builder Machine Code are paired with their English equivalents. It isn’t really clear how or why they fit so neatly together, but it’s sort of jarring to see that the two languages connect on a letter to letter basis.

As intelligent as this title seemed to be when it launched, the doubts grow about whether it can climb back up to be that title it positioned itself to be. It’s seemingly dug itself into a hole after an impressive start.

Again, it’s from a microscope perspective — as the story fills out, the picture will likely become more clear as things are revealed. Supposedly, there’s a story arc that will take months, even years, to play out.

With issue #6, things look positive, but in hindsight, will we see building blocks or warning signs .

Buy Avengers #5 from Things From Another World!