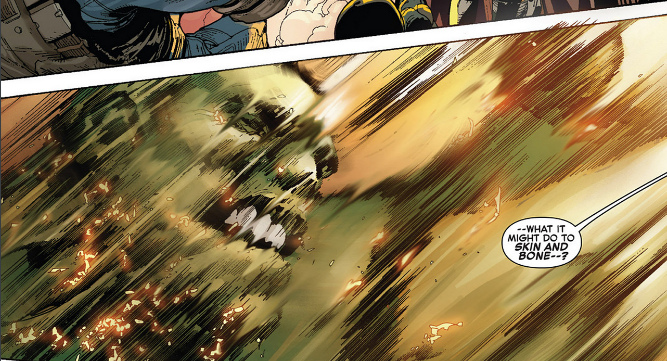 The Hulk gets a new adjective, going from the ubiquitous Incredible to the new and combat-ready Indestructible, which signals a change for the character that looks to put him in danger more often. The Hulk’s disappearance, or rather, his lack of appearing anywhere since the Phoenix Force arrived on Earth, has left S.H.I.E.L.D. director Maria Hill uneasy and looking for clues as to his whereabouts. Bruce Banner finds her instead and proposes an exchange — Banner gets supplies and research equipment, and the U.S. government gets Hulk. 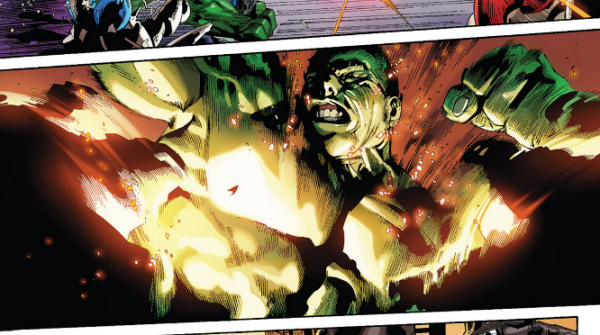 Mark Waid has a knack for getting right to the essence of a character, and Indestructible Hulk has a sense of urgency that comes from utilizing characterization that’s already there. Banner’s quest to rid himself of his raging alter ego now gives way for acceptance. Nothing feels forced or contrived — it feels very, very natural. Banner’s watched fellow scientists Reed Richards and Tony Stark use their smarts and powers for good, and after looking for a cure to his affliction, he’s decided it’s better to harness the raw energy and power of the Hulk rather than spend it willing the problem away.

The brisk pace of Waid’s writing is matched by penciller Leinil Yu’s cinematic approach which gives dramatic air to the panels. Judging by what’s on the page, Marvel is invested in the Hulk, and they’ve given this book every reason to succeed. Yu knows how to draw action, and it looks, well, incredible. There’s a sense that Yu really wants to emphasize not only the utter destruction and havoc the Hulk is capable of doing, but also the speed at which he moves. Waid’s fearless Hulk lacks any sense that he’s vulnerable, and Yu’s art shows the Hulk mindlessly taking on all targets without hesitation.

Geared with tech that warns others when he’s about to rage, Banner has S.H.I.E.L.D. on short notice, but Hill knows exactly what it takes to pull the trigger on her new weapon and point it towards harm’s way. The Indestructible Hulk takes Banner’s problem and plays it like a possible solution — a powerful one that even the Mad Thinker can’t fathom when his calculations suggest there’s no limit to the Hulk’s strength.

It doesn’t mean Banner’s shed himself of the Hulk problem or vice versa. A situation like this that’s convenient for Banner and the government powers that hold his leash might make for some action packed story arcs, but it’s likely that relationship will deteriorate and make Banner question whether the Hulk can ever be a force for good. It may be just a matter of time before the Hulk becomes uncontrollable even for S.H.I.E.L.D.

Indestructible Hulk #1 is an excellent read and worth the price of admission. Waid and Yu are a worthy creative team, and the Hulk is one of Marvel’s A-listers. The title may have changed, but it begs the question: How indestructible is he?

Buy Indestructible Hulk #1 from Things From Another World!