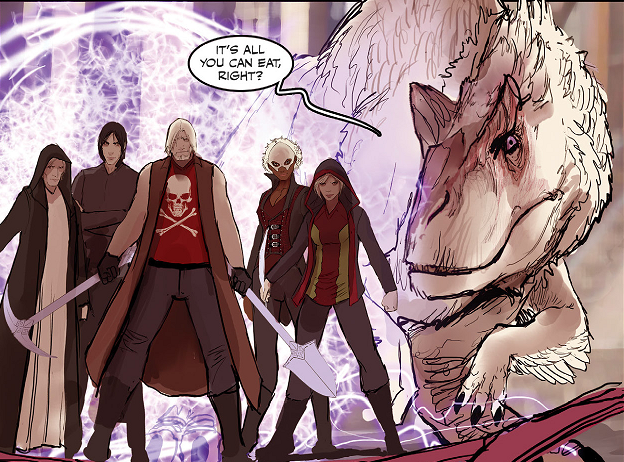 The translation of the Dreamer’s Codex is complete, and Maria Benes is ready to strike a deal.

In Death Vigil #5, Maria meets the Abyss and states her price — the Reaper’s scythe. Impressed by Benes’ hard stance, the Abyss agrees to the terms and declares open war on the Vigil.

If you’re not reading Death Vigil, you’re seriously missing out on one of the best current series. Writer and artist Stjepan Sejic knows how to keep the story running with beautiful panels and tight writing. Issue #5 hits the ominous notes with the stage being set for a gigantic battle, and the exchange between Benes and the Abyss is pitch perfect.

While one side prepares for assault, life is normal for the Vigil — as normal as life can be for those who’ve died and come back to serve as a fighting force holding back the powers of darkness. The contrast is nice — the rumblings of war are about to break the Vigil’s peaceful yet tense existence.

For veteran Samuel Lewis, part of the tension comes from the jealousy he feels watching new member Clara Jenkins master her Veilripper. Clara reveals how her Starlock came to be — as a child, she used to play Wizards and Warriors. While the boys opted to swing imaginary swords, Clara found a feather and imagined it could open gates. Clara believes Bernie’s scythe tapped into her memories to recreate her childhood weapon, and it’s given her a leg up on Sam who still has a few questions left unanswered.

One question that’s been building for the readership — what exactly happened between Bernie and Allistor that has caused such a large rift? Sam tells Clara he knows nothing about it — past attempts to learn more ended with Bernie giving him the silent treatment. Clara’s curiosity gets the best of her, and she teleports Mia outside for a one-to-one.

Using the Starlock, Clara learns that hundreds of years ago, Heinrich saw a demon and reported it to the church. The church handed him over to a secret order who saw great potential in him. Unfortunately for Heinrich, these Seraphim were actually necromancers who had infiltrated the church, working to take out Bernie and the Vigil.

When Heinrich discovered the Order he was working for had a dark truth, he went to the Vigil for help. Heinrich and Bernie developed a friendship that soured when she discovered her downed Vigil member’s Veilripper hanging on Heinrich’s wall.

Without Bernie to help him, circumstances led Heinrich to save his daughter Mia’s life by binding her to a True Primordial. After unleashing her on the necromancers, the Vigil made it their mission to put Mia down, afraid of her powers. Eventually, Heinrich and Bernie came to an uneasy truce, and the tensions have remained to this day.

The strength of the Death Vigil series lies in its eye for brilliant storytelling. You can see how sharp the focus is by looking at how Sejic lays out the plot and details issue by issue, scene by scene. We met Mia and Allistor issues ago, and they appeared as two characters shrouded in mystery. They were compelling in their own right, and their origin story finally getting a place in the story adds more to the lore as the conflict between the Vigil and the Primordials continue to escalate. The timing is on beat, and Sejic’s pacing and story layout provide a steady rhythm that rises in volume, hitting hard when the action kicks off.

The strength in the storytelling is also apparent in the dialogue and visuals. Each character has a distinct voice — when Clara tries to get Sam’s attention by calling his name, you can practically hear it in your ears. Mia’s narration of her father’s strange journey also keys in readers to her personality. When she delivers lines like, ” I’m cute, huh?” it’s a little endearing, especially given that her Primordial form lands more on the horrific scale of things. The humor isn’t overbearing or cheap, and the script has the sort of precision that proves Sejic is as much a writer as he is an artist.

On the visual side of things, the panels keep the flow going as the issue races to a very potent final page. From the character designs to the expressive facial cues, the artwork maintains a relentless sort of approach to the storytelling — Sejic isn’t messing around or pulling his punches.

Altogether, Death Vigil is a product of several elements working together to create one of the best comics on the market today. The art and writing are superb, and issue #5 is another piece of evidence that Death Vigil deserves a place in your pull list.