And nothing is fine.

Eight months ago, Marvel said everything would end, and Secret Wars #1 is finally upon us. Minutes from the incursion, the last two remaining Earths wage an ultimate war for survival. In order to keep two worlds from colliding, one Earth must be destroyed.

Secret Wars #1 kicks off with Doctor Doom and his team meeting up with the Beyonders for a last-ditch effort to save the multiverse. Doom answers the Beyonders’ question of, “Who dares stand before us?” in typical Doomish fashion — “I. Doom.”

Meanwhile, Ultimate Nick Fury consults with Ultimate Reed Richards and decides for an all-out battle to save his planet. He sends Ultimate Iron Man and a fleet of helicarriers to invade, but the Earth-1610 forces are overwhelmed in response. The Triskelion is toppled, literally, and Ultimate S.H.I.E.L.D. is no more.

Using Fury’s offensive as a diversion for his master plan, Ultimate Richards launches a mightier force that turns the tide in Earth-1610’s favor. Casualties pile up as characters welcome the end with open arms or do their best to get out of harm’s reach. In the end, worlds collide, but the end is only the beginning. 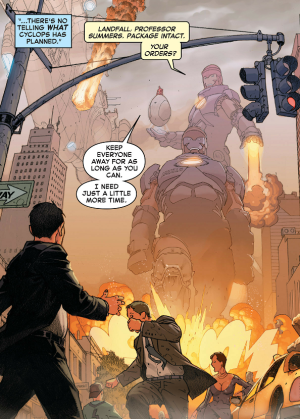 Secret Wars #1 hits some very sweet spots, delivering a fantastic Marvel finale whether you wanted it or not. Once Ultimate Fury gives the order for full-scale warfare, the issue charges like a mad bull to its inevitable conclusion thanks to some incredible writing by Jonathan Hickman and some bombastic art by Esad Ribic. The issue has a lot of layers, and it’s a polished piece of work that will have readers anxiously awaiting what happens in next week’s installment.

The issue does that by hitting the beats and working up the dramatic contrasts. We have Ultimate Richards looking at the incursion as the perfect opportunity to build a more perfect world while his counterpart sees the finality of it all, opting to take a few chosen representatives of the human race on a last-chance mission. Wilson Fisk invites his associates for an end-of-the-world party that gets crashed by the Punisher, and Cyclops arrives with his own squad of Sentinels along with the Phoenix egg.

That’s a lot to chew on, and it happens without pretense — this is a crossover starting on the right foot with plenty of plot lines that could potentially lead to some fantastic stories as we get further into this event. No panel is wasted this issue as we get glimpses of Spider-Man saving bystanders, the Guardians of the Galaxy fighting back against the invaders, and the Cabal gathering behind the Maker. It’s compelling and thoughtful, and I really hope the subsequent issues open up and expand to fill the new Marvel universe as it comes into shape.

I really enjoyed Ribic’s art, and the pages are stuffed with action scenes that capture the scope of Hickman’s vision. Even the pauses, like the temporal bubble opening up on New York City, carry weight like a breath being held before a sudden gasp or a heart stopping mid-beat.  Whether it’s the doomsday device opening up and releasing a fleet of ships or lightning crackling between two Earths, Ribic’s compositions are a sight to behold.

Add to that Ive Svorcina’s colors, and Secret Wars #1 looks like a book that Marvel let loose, knowing it would deliver. It’s not a perfect issue, but it packs a solid punch. I would have liked a little more work on the facial expressions by Ribic and less open-ended ominousness from Hickman. Marvel has given hints as to what happens in Last Days and Battleworld which steals a bit of the issue’s thunder, and the sheer amount of cliffhangers along with the lack of bodies leaves the door swinging wide open.

For now, we know at least one thing. 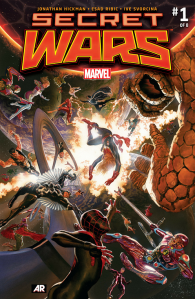 Buy Secret Wars #1 from Things From Another World!

Let's go!! #iste2016
I will own this someday. Just kidding. Please let me be in one of your movies! I do a mean Igor.
A DVD rental area in the lobby of the Alamo Drafthouse theater. Convenience!
Checking out the Alamo Drafthouse in San Francisco for a Raiders of the Lost Ark showing. Beautiful decor.
no one was picking up mooncop for free comic book day, so i checked it out. discovered a really awesome book. highly recommended if you like thoughtful humor.
winners of the first ever free comic book day trivia contest at current comics.
Back to top
Loading Comments...
Comment
×
%d bloggers like this: