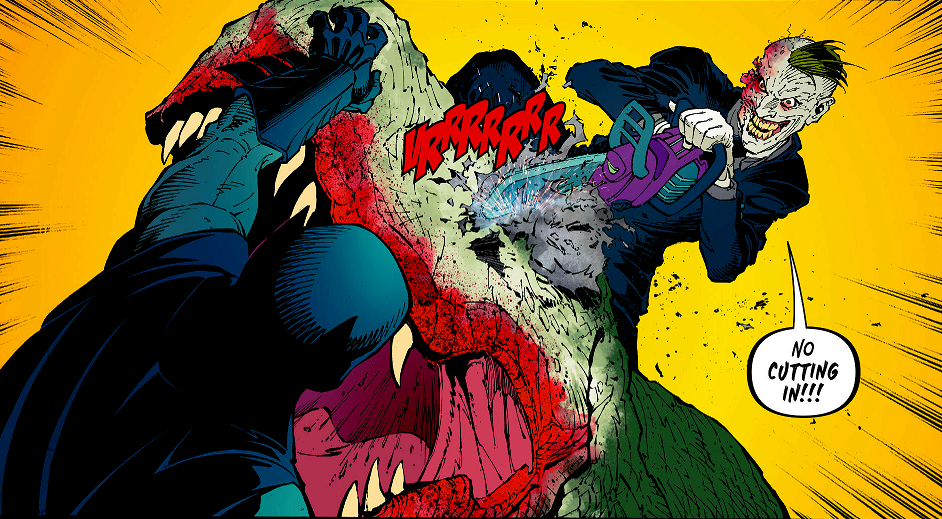 All things come to an end.

And if you believe your eyes (or Scott Synder in this interview), so does Batman in Batman #40, the final chapter of Endgame.

As Gotham City falls to pieces, Batman and his allies — the Bat Family along with the best rogues gallery in comics — fight their way to Joker’s float. The plan: Get Batman close enough to harvest the Dionesium from the Joker’s spine in order to synthesize a cure for the laughing gas infecting the city. When the Clown Prince of Crime pumps up the volume — literally — bringing our would-be heroes to their knees and shattering their breathing masks, the Joker claims victory and spills a secret.

There is pure Dionesium, but not in his body. 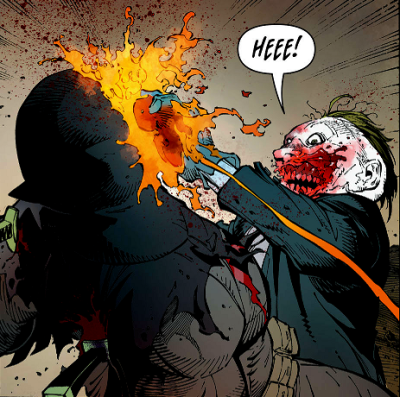 A small reserve hidden in Gotham’s deepest darkest caves contains one last pool of the miracle-liquid, and it’s rigged with explosives. And just when an ultimate victory over the Bat is finally within his grasp, the Joker unmasks Batman to find Dick Grayson posing as the Dark Knight.

The real Batman is in the cave, analyzing the Dionesium while Julia Pennyworth keeps the explosives from detonating. Once the sample is confirmed, Batman collects the fluid only to begin a race against the clock as the explosives suddenly go off, setting off a chain reaction that could bury Batman and his solution. To make things worse, the Joker appears for a one-on-one battle that doesn’t disappoint.

Batman #40 is a bulldozer from start to finish — a bulldozer with a rocket engine. The plot takes no prisoners as Batman and a suped-up Joker release decades worth of pent-up anger and frustration on each other. Along with a pace that’s electric, Batman #40 makes for one mind-blowing issue that will probably get under the skin of many readers — and for good reason. Snyder and Greg Capullo pull no punches, and the story and artwork move hand in bloodied hand.

Snyder’s scripting encompasses a lot of the rage that comes boiling to the surface, and the clash between Batman and the Joker feels epic and meaningful. This is a sibling rivalry set to 11, and there’s a lot packed into this issue that had me reeling, trying to wrap my head around what was going on in the details.

Batman #40’s first page hearkens back to Alan Moore’s origin story for the Joker — one that posits him as a failing comedian who finds himself complicit in a robbery. In Moore’s story, Batman is an indirect cause for the creation of the Joker — the comedian pretending to be the Red Hood is hunted by the Dark Knight, and he falls into a vat of chemicals that transforms his appearance.

The conundrum is that later in Batman #40, as they go toe to toe, the Joker asserts he came first. It adds layers to the story because we know the Joker is unreliable — Batman himself questions the legendary status of the Pale Man after running into the Talon, Boone. So, if the Joker isn’t an immortal man who happens to appear at tragic events in Gotham’s history, then who is he? And what kind of person goes to these kinds of lengths to create a legend for himself? 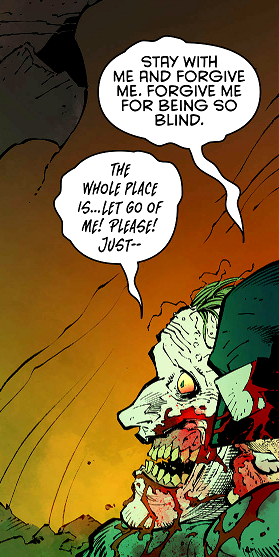 We don’t have to look too far to see the man on the other side of the mirror — Batman, a manifestation of one man’s idea of creating justice in a chaotic world. (On the flip side, Joker is the representation of chaos in an unjust world.) Batman is a living legend, and he will be remembered long after both Bruce Wayne and the Joker pass — something that probably irks the Joker to no end, especially now that he’s found some sort of meaning to his life.

Snyder takes it even further when the Joker reveals his desires for an eternal conflict locked with an immortal Batman — a permanent legacy of continuous conflict. But Bruce knows life is short, and things come to an end. Bit by bit, Snyder peels the skins from his characters until they’re left raw and open, and then we see what the Joker really means to Batman — that it was Batman who failed and created his own worst enemy, and the time has come to seek forgiveness.

Capullo’s artwork is amazing and complementary to the scripts — the pencils this issue are brutal in their visuals and not just for shock value. These are panels filled with a sort of rawness and permanence that you don’t see in superhero comics. It’s not every day you see Batman getting a playing card through the eye, and when visuals show wounds that are more than superficial, you start to see a visual canon that carries itself through upcoming issues.

On inks, Danny Miki continues to excel. There’s something about Miki’s finishes — on closer look they have the texture of calligraphy as lines taper and wave. FCO Plascencia’s colors offset the visual horrors on one page, then they extend the terror by creating atmospheric greens and foreboding darkness. The production value is tremendous.

For a story arc aptly titled Endgame, this is a Batman story that won’t fade away anytime soon. This issue will have huge consequences, and the aftermath will be a sight to see. In an interview, Snyder said he wanted to go out with a bang, and though his position as head Batman scribe won’t be changing, he and the creative team have upped the ante with a Batman-Joker tale that will be popping up on Best-Of lists.

And that’s a testament to how great this Batman team is because they’ve kept pushing the story, whether you like it or not. Endgame ends with a loud explosive bang, but fans will stick around for the aftershocks. 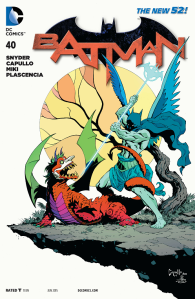