With an introduction that takes place in the distant future, Battle of the Atom #1 gives readers the ending first — a potential future that exists along the current timeline. It’s a dystopian future where mutants still battle Sentinels in public battles, but the world is much, much worse for the wear. Escalation has created bigger battles with increased collateral damage, and Magik doesn’t like what she sees.

Magik’s feelings provide the narrative in the form of a letter to her current team leader, the fugitive revolutionary Scott Summers who has been battling to protect mutants and ensure a future that’s safe for humanity along with those born with the X-gene. That future, by the looks of it, will not materialize — it actually becomes a worse place because or in spite of Cyclops’ efforts.

Presently, mutants continue to pop up all over the world, and Cerebro catches a major mutant appearance in Phoenix, Arizona. Kitty Pryde and the classic X-Men take the Blackbird and encounter Animax, a mutant whose power allows her to create powerful constructs in the form of giant monsters. The X-Men have their hands full taking down Animax’s monstrous creations, but what starts as a battle between a fledgling team against a reckless criminal striking out with newfound powers gives way to a larger-scale conflict.

Where there are mutants, there be Sentinels, and swarmed by the killer machines, the X-Men barely hang on to survive. Fortunately, Cyclops’ team also makes contact, and both teams work together displaying some of that great X-Men chemistry.

The odds now in their favor, the X-Men dispatch the Sentinels, and Animax surrenders. A brief respite gives classic Cyclops a chance to comment on the situation — a moment that’s suddenly brought to a screeching halt when a beheaded Sentinel kills him, causing present Cyclops to disappear from the timeline.

Battle of the Atom #1 is a brilliant jump-off point that packages a great set of major plot points ready to roll out in the coming chapters. Brian Michael Bendis knows how to create a compelling premise — his Uncanny X-Men and All-New X-Men books are built from the ground up from the remnants of the past few years’ major X-Men events carrying over some solid arguments for and against the development of the team(s).

Right now, the X-Men are divided, and mutants are once again appearing all over the world. There’s positives and negatives, but also meta critiques perhaps pulled from the vocal forums where fans of the X-Men have passionately discussed their opinions.

Readers have also been reintroduced to the classic X-Men who find themselves in a place where mutants are more accepted and waves of humanity have joined the cause. The classic team sees some hope for the world, but they may not be comfortable with their personal developments.

For present Cyclops, the past can’t be changed, and he presses on. Though circumstances make it difficult to savor the moment, even if he did have the opportunity to pack up his visor to settle down as a civilian, it would be a tortured existence for someone so dedicated to the cause. After the Cyclops both come back to life, a quiet moment between the two speaks volumes as both begin to digest what happened. It’s also very possible that having experienced non-existence, the Cyclopses — or is it Cyclopi — have a new perspective on what their lives mean and what their deaths could mean for the world around them. 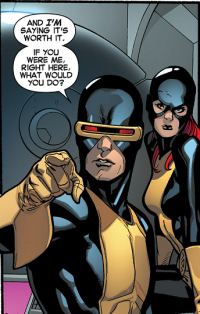 The death of Cyclops, however shortlived this issue, also presents enough reason for everyone but the classic X-Men to demand the young team return to their original place in time. It’s become very apparent, especially to those who are still alive, that having time-displaced versions of some of the members presents a very clear and present danger. The new conflict in forcing teens to go unwillingly back to their lives complicates matters further especially with the notion that those who are sent back are consigned to what will be and has been — Jean Grey ends up dead, Cyclops kills Professor Xavier, Angel loses his wings and his memories, and Beast struggles with his mutations and finding a cure for his affliction.

To top it off, Bendis ends the issue with the appearance of another X-Men team, and the setup is loaded with more potential conflicts. It’s an exciting prelude that could be the X-Men crossover that fans have been waiting for.

Artist duties this issue are split between a trio of all-stars: Frank Cho, Stuart Immonen, and Wade Von Grawbadger. It isn’t easy, at first glance, to tell immediately who penciled who and what, and that works to great effect because the styles blend almost seamlessly together with all of the artists’ individual strengths and very little of their weaknesses. Cho, Immonen, and Von Grawbadger  know how to draw an issue with scope, focus, and acuity, and giving each a set number of panels and pages gives them less work and more time. Cho’s clean lines and body language convey action and heighten drama through visual tension. Immonen’s bolder lines bring gravitas to his subjects, and his shadow work gives the panels a more epic feel. Von Grawbadger — he’s most likely the inker this issue — remains consistently great at what he does.

Colors are polished and clean, which works well for the most part — the Sentinels look a bit flat, which in defense of Marte Gracia, could be due to the pencilled renderings lacking dimension. Gracia does shadows and shades extremely well, and the overlays are wonderful. There’s also some brilliant lighting which creates a great dynamic the way a video game benefits from particle effects and bright explosions.

Battle of the Atom #1, in writing and in display, feels like a bookend for the All-New X-Men books, which is in line with the next chapter — part 2 continues in the pages of All-New X-Men #16. The seeds have been planted, and it looks like this concerted effort between a small group of writers and artists — last year’s AvX was a debacle with way too many chefs in the kitchen — will lead the charge for a great crossover for a major victory that will make X-Men fans happy.

Next Issue: Battle of the Atom #2 Review

Buy Battle of the Atom #1 from Things From Another World!