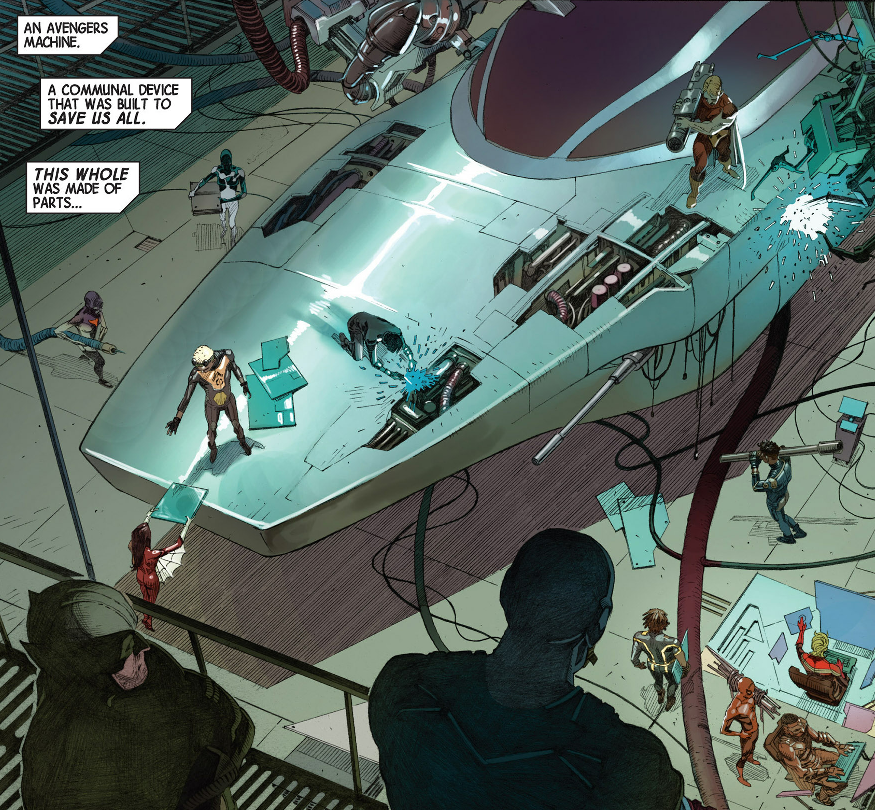 Origin stories get their spotlight in Avengers #2 as the bulk of the book is spent in different timelines defining the threat and the team designed to defeat it.

The main team, held captive by Ex Nihilo and his cohorts, learns about the Alephs, Nihilo’s mission to create higher forms of life according to his own vision, and his plans for Earth.

To continue with last issue’s theme of escalation and the need for a broader team capable of facing larger threats, Avengers #2 follows Steve Rogers and Tony Stark in their recruitment drive. Wolverine, Spider-Man, Captain Marvel, Manifold, and several others get the nod to join the Avengers, and it’s a treat to see what it takes to motivate each of them to accept the invite. For Cannonball and Sunspot, the allure of being on a team of accepted heroes as opposed to aligning themselves with the controversial X-Men is more than enough to risk the dangers. For Spider-Woman, it’s a noble calling with great responsibility.

The characterization opens up plotlines and adds drama to the mix. Wolverine’s surly attitude plays backseat driver to Captain America’s drive to push forward and lead the team towards imminent danger. Ex Nihilo is still compelling — is it narcissism or purpose that drives him — and the main team’s quick defeat last issue has shown how powerful Nihilo’s small squad is. Will the larger team made up of ringers be enough to save Earth?

Jonathan Hickman’s scripting flows well, and the plotting is clear with steady sailing back and forth through all of the flashbacks interspersed throughout the book. Even with book’s focus on background and foundation, there’s still that pertinent sense of urgency that builds a stronger case for what’s yet to come. This book sets up the next issue for an epic battle pitting Ex Nihilo’s band against an untested team rushing headfirst into unknown territory. 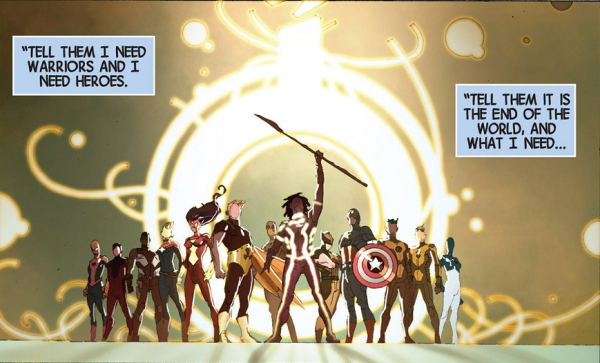 Jerome Opena’s artwork is not as strong with this issue, but don’t interpret that as saying his artwork isn’t beautiful, cinematically charged, and comic-forward. It seems like there’s a lot less action in this book, and Opena’s composition still makes things interesting though some of the facial expressions aren’t consistent with the rest of his work. Opena’s art is complimented by the color workings of Dean White, Justin Ponsor, and Morry Hollowell. Panels are toned and flushed with colors that convey a sense of mood while other panels have broad palettes of color. Visually striking, an action packed third issue could lead to high sales as people pick one issue up for reading and another to cut and paste panels onto a bulletin board.