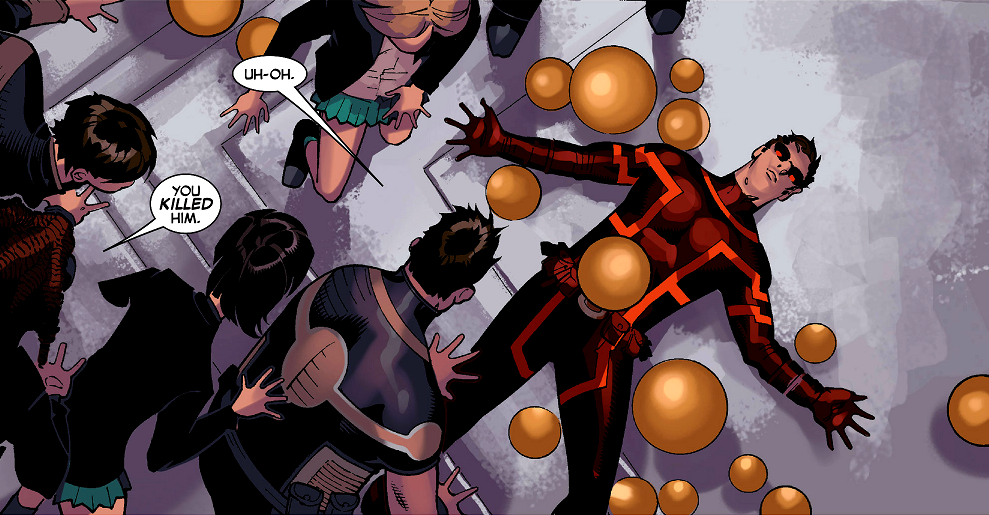 The end is near.

As issues approach the Uncanny X-Men #600 mark that will end the series in time for Secret Wars, it looks like the spotlight has landed squarely back on Cyclops.

Last issue, Scott Summers quit everything. Leaving his team in the hands of the Jean Grey School X-Men, Summers walked away from his mutant revolution.

In Uncanny X-Men #32, the Summers brothers come together for an introspective issue that explores and recaps the entire volume — everything from Professor Xavier’s death to Cyclops’ war with mutant hatred. He’ll have to deal with the fallout as members of his own team turn their backs on him, and there’s a crushing heart to heart with Emma Frost that’s years overdue. In the end, Christopher Summers joins his brother for what looks to be the home stretch in Cyclops’ long and odd journey. 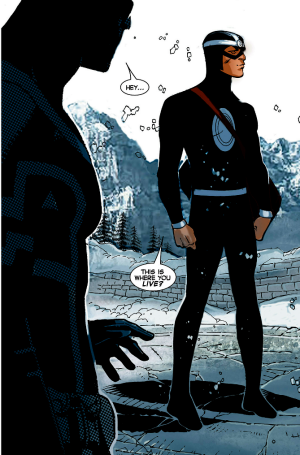 Now, I’m glad Cyclops is front and center as he needs to be. For the past few years, it seems like his story was relegated to a backdrop that bled into the main storyline from time to time. And when it did, it battled against other storylines — the Phoenix Five’s broken powersets, a young team of prospects, Magneto’s development as an anti-hero, the future Brotherhood, and the classic X-Men, to name a few.

That’s a laundry list of to-dos pulled and thrown back into ether. Very little has been clearly sorted out or resolved, and now that we’re a few years removed from Cyclops’ most damaging act, it’s frustrating to see we’re still watching him flounder about. It’s even more maddening to see him actually quit on his team, opting to let the world decide his fate after turning himself in.

That’s the crux and problem of the entire issue, and though he’s eventually led back to the mutant revolution he started, we’re back at the base of Sisyphus’ hill with that giant stone.

The biggest complaint I have is that the end of this story will have all of a few months to resolve itself — if there’s any resolution at all to come. Looking back at the past few years, I can’t help but see a lot of time wasted. Brian Michael Bendis put together a solid beginning, but the series has unraveled itself with loose threads that have splayed out every which way. Now that we’re finally seeing the light at the end of the tunnel, will it be as disappointing as the conclusions we’ve seen in each of the story arcs? With so many plotlines left to be tied, will fans get an ending they want, let alone deserve?

Though I didn’t like Cyclops’ about-face and the issue’s plot about him finding the resolve to continue his mission, I did enjoy the interpersonal conflicts. The previously mentioned one-to-one with Emma contains a huge reveal, and though the dialogue felt forced and overtly dramatic, the emotion and purpose felt pointed and heavy. Chris Bachalo’s pencils are probably their strongest here as Frost takes on her diamond form. It’s an interesting contrast — Frost turning into the hard substance contrasts against the emotionally vulnerable state she puts herself in. It’s done very subtly, and I get the sense that Frost does it out of a subconscious need. 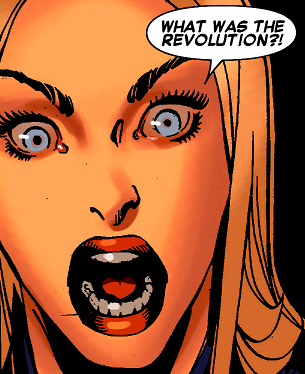 Cyclops’ young team also takes him to ask after they’re abandoned. The young Uncanny X-Men do not fit in with the Jean Grey School students, and from their perspective, Cyclops’ decision stings like a betrayal. The scene contains the only action scene in the entire issue, leaving Bachalo to focus his talents mainly on the character expressions, body language, and composition to convey the drama of the story. And while Bachalo remains a brilliantly talented artist, it’s my opinion that his artwork this issue seems a bit run of the mill compared to his past work.

The ink work by Tim Townsend, Wayne Faucher, Mark Irwin, Victor Olazaba, and Al Vey still looks crisp and tidy, and the colors by Bachalo and Rain Beredo are textured. The flesh tones seem a bit off-color with their orange and purple tinges, but I’m just being nitpicky.

I’m left disappointed overall with Uncanny X-Men #32. The cover is probably the most compelling thing about the issue — it depicts Cyclops standing over slain versions of himself, the one survivor. I’d much rather the issue pushed Cyclops to go out with a bang, taking up the mutant revolution on his own. Freed from the entanglements of subplots and side stories, we finally get to the meat of it all as the embodiment of Professor Xavier’s dream shows the world what one mutant with a purpose can do. Instead, Scott Summers falters and then relies on his brother to pick him back up. The mutant revolution becomes a buddy story, and I find myself just waiting for this chapter to finally just end. 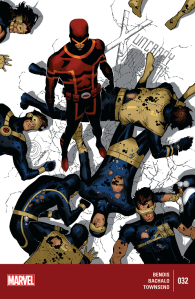 Buy Uncanny X-Men #32 from Things From Another World!