Now that the Inventor’s been dispatched, Ms. Marvel gets a brief respite just in time for a Valentine’s Day-themed issue.

G. Willow Wilson pens a light-hearted issue #12 that puts Loki at the Coles Academic High School for a cleanup mission. While the students go about getting dates for the dance, Loki scopes out any vestiges left in the Inventor’s wake. After Bruno Carelli’s invite to Kamala Khan gets shot down, Loki takes a personal interest and becomes a sort of Cyrano de Bergerac to the friend-zoned Carelli. They pen a secret admirer letter to Kamala, hoping it will get her to the dance.

The plan works, but things get out of hand when Loki spikes the punch with a truth elixir. The celebration turns into a giant brawl until Ms. Marvel jumps in, and someone douses the trickster in the truth elixir.

As filler issues go, Ms. Marvel #12 doesn’t carry the same sort of momentum that’s coursed through the previous issues’ pages. Combined with a weaker narrative, issue #12 feels a bit lackadaisical, and Wilson’s scripting seems a shadow of her normal self with dialogue that comes across as a bit forced. When Carelli asks Khan to the dance, her response by brushing it all off as a joke seems explication-heavy as if it’s written for a new audience hopping onto the title in time for a new story arc. Actually, the majority of the exchange, from the moment Khan enters the convenience store to Vick chiding Bruno, feels like Wilson-lite.

Khan’s conversation with best friend Nakia also seems a bit off with characterizations that don’t seem as natural. Khan rattling off her Valentine’s Day plans — staying at home to level her MMORPG orc shaman during a double XP weekend — doesn’t have Wilson’s trademark subtlety. Nakia also turns out to be a wet towel when she calls the dance a “patriarchal capitalist display of fake affection.” Before this issue, it wasn’t clear to me that Nakia had this type of perspective, and its sudden appearance seems against type rather than development.

But for all its flaws, Ms. Marvel #12 still succeeds in developing its main character as a superhero. Loki’s truthiness gives Marvel a few new viewpoints to think about — superheroes don’t always need to resort to violence, and the nature and consequences of mistakes. The first seems incredibly relevant given Ms. Marvel’s inclination to rush into every encounter by embiggening her fists.. In that way, she reminds Loki of his brother Thor, and we all know how well they get along.

As for the second point, Loki’s words seem a bit heavy. Is it foreshadowing or just plain real-talk? Either way, it seems appropriate as a counter-point to Kamala’s belief that people should be allowed to make mistakes. Having great power means having to own up to the consequences of mistakes made using those powers, and it would serve her well to accept this lesson.

On art, Elmo Bondoc takes over for Adrian Alphona, and while there are differences in each of the artist’s styles, the tone of Bondoc’s pencils keeps things cohesive — coloring by the series’ colorist Ian Herring also helps. Bondoc has a talent for drawing expressive characters, and the comical moments get a nice boost from the lively line work. There isn’t much action to be had due to the plot particulars, but the entire issue feels active with great body language and progressive sequentials.

Herring’s colors, as usual, are beautiful, though the pages taking place in Asgard look a bit radioactive. There’s an obvious shift as the book goes from day to night, and Herring’s lighting is outstanding.

As a one-off, Ms. Marvel #12 isn’t totally dismissable. The first half seems rough compared to Wilson’s previous issues, but the second half delivers by giving Ms. Marvel a few teachable moments thanks to the trickster Loki. It seems ironic at first, but Loki’s the nerd to Thor’s jock persona, which makes the Ms. Marvel’s first battle with Loki one for the books. With that, I’m looking forward to a new story arc, and whether it’s Alphona or Bondoc at the helm of the visuals, I think fans should expect great things. 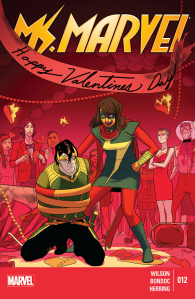