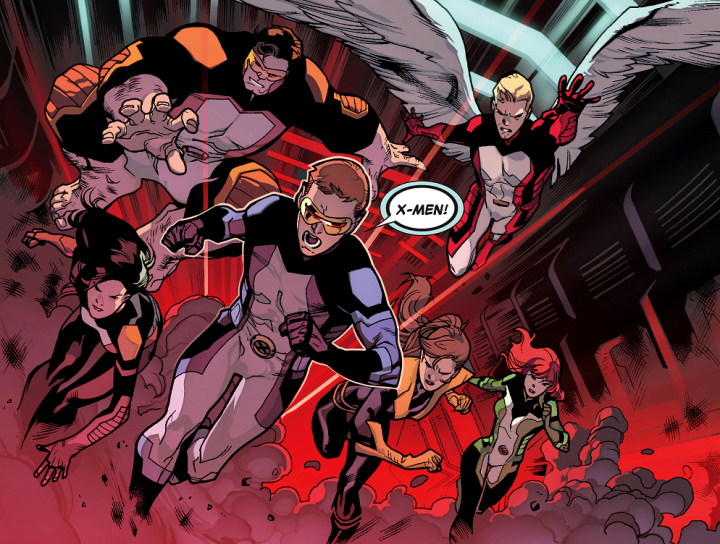 You’ve got the power to read minds, levitate objects with your own, and you’re apparently responsible for taking billions of lives.

It’s one thing to deal with the guilt in the aftermath. It’s another to live your adolescent life knowing what’s ahead.

Do you try to change it? Can you?

What if you knew who you were going to marry?

Questions like these have been tossed around by individuals the world over, but Jean Grey, aka Marvel Girl, Phoenix, Dark Phoenix, and Xorn doesn’t get the benefit of a doubt.

A mutant with great potential — she eventually becomes the strongest psi on the planet — Jean has her whole adult life ahead of her. For some, daydreaming about the future is a hopeful things. For Jean, it’s knowing that life will be filled with death, heartbreak, and betrayals.

In All-New X-Men #22.NOW, young Scott Summers gets to confront Jean about her current state of mind because, unlike Grey, he can’t read minds. Since plenty of the conversation takes place in the mental spaces between them, a lot is left unsaid though it isn’t hard to infer what’s going if you know enough about the characters’ histories.

In case you don’t, a look back through the run of 22 issues for the All-New X-Men title provides the gist — the classic X-Men have been brought forward into the present day to witness their future.

Cyclops, possessed by the Phoenix Force, is a vigilante on the run accused of killing Professor X. X-Men foes Magneto and Emma Frost are now team members, and Magik rules Limbo.

Jean Grey — the current Jean Grey — has been dead for some time now, and were it not for Cyclops’ relationship with Frost, the future would be even more bleak.

If that isn’t enough to process, classic Jean has to hold it together while dealing with recent traumatic events — kissing Henry McCoy, battling a rogue version of her future self, and meeting her future widower husband. They all add plenty more for her to deal with, and it doesn’t help that her mental abilities allow her to know what everyone else is thinking, which gives her the ability to see what’s going on through others’ eyes.

Now,  if anyone can empathize or even challenge Jean, it’s Scott, and he’s uneasy with being left in the dark. When Jean gives him the option of knowing his future — he realizes it’s best left alone, and Jean leaves the conversation.

Outside, Bobby Drake looks right at home in the Great White North when he sees bright lights in the sky. The invaders turn out to be Shi’ar troops with one mission: Capture Jean Grey.

A few things are made very clear this issue, and one of them is that All-New X-Men works best with Stuart Immonen on pencils. Immonen’s ability to switch from the serious to the humorous works perfectly with Bendis’ knack for interjecting scenes with personality.

Immonen knows his characters in and out, and it shows particularly during the issue’s battle scene where it’s easy to lose track of who’s doing what to whom. But Immonen’s panels take on the challenge, featuring multiple X-Men weaving, slashing, and flying over the battlefield.

And where there’s Immonen, there’s Wade Von Grawbadger’s powerful inks. There’s a confident touch to the dark overlays, and the thickly dark shadows complement Marte Gracia’s colors which, as usual, look beautiful and rich. The result from the combination of creative talents is one of Marvel’s most polished books.

The combination of Bendis and Immonen’s talents also produces a brilliant beginning for the Trial of Jean Grey crossover that has the X-Men reeling from the sudden loss of their beloved teammate.

The contrast between the Summers/Grey dialogue and the bounty-hunting skirmish further adds to the conflict because there’s unfinished business and so much left on the table between Scott and Jean. In light of the possible budding romance between Scott and Laura, the quest to return Jean from her alien captors draws parallels from the original stories involving the Shi’ar — former allies of the X-Men.

Originally, the Phoenix was just an alias for Jean Grey as she reached her full potential. The creation of the Phoenix Force was a retcon that allowed Grey to be absolved of its crimes and give her a return to the Marvel Universe.

With the Shi’ar making an appearance, signs point to a future appearance by the Phoenix as Bendis draws up newer and bigger circles.

In terms of adventure, it looks like the X-Men are headed for space. By finding Jean Grey, perhaps they will find the source of her real future pain.

Next Issue in Story Arc: Guardians of the Galaxy #11.NOW Review

Buy All-New X-Men #22.NOW from Things From Another World!