Young Jean Grey and Scott Summers have left the building, and the X-Men are in hot pursuit in X-Men #5, the third part of the Battle of the Atom crossover.

After Grey and Summers used a distraction as cover for stealing the X-Men’s Blackbird, the rest of the team has to come up with a plan to get them back to base and back in time. It’s the perfect time for the McCoys to reveal their masterpiece — the Dove, a more streamlined flying personnel carrier.

Jean and Scott have found their way inland off the beach, and the issue catches up with them as they loot a clothesline for some civvies. The pair also comandeer a motorcycle, and a ride up Highway 1 gives them a chance to speak from their minds as well as their hearts.

The X-Men, with the help of Xavier’s Cerebro pill, locate the runaway teens, and a confrontation turns physical when Rachel Grey and Kitty Pryde drop in unannounced to stop the conflict.

X-Men #5 is a solid issue that continues the plot, but it definitely feels like the middle child in this crossover. Brian Wood’s scripting style is easy to follow, and the pacing for the most part is even. Wood plants the seeds for drama amongst the team, and tensions are escalating between the leadership and the members of the team.

Since the X-Men have splintered, Wolverine, Storm, and Cyclops have become leaders of the various factions. While Cyclops has managed to keep his team in check, unified in vision, Storm and Wolverine have had their hands full trying to keep their subordinates motivated and in sync.

The problems bubble to the surface and explode this issue, and were it not for the disproportionate measure the X-Men took to bring Jean and Scott back to the fold, things would have stayed bottled up. It’s because of Storm’s heavy-handed approach that her leadership is once again called into question by Rachel who’s already at odds with Ororo’s tactics. The reemergence of the conflict gives the teens a chance to escape, and Jean uses her telepathic powers to shield the two as they make way towards Cyclops’ secret base.

That Scott and Scott will soon meet is the high point of this issue, and X-Men #5 serves its purpose of leading the story to Uncanny X-Men #12. For that reason, X-Men #5 feels like the middle child in this crossover — a bridge that isn’t particularly awesome in and of itself, but it does its job of carrying and handing over the plot to the next chapter.

Continuing with pencil duties from last issue, David Lopez improves this issue with better characterization and less cheese. Lopez has a very clean style, and his characters are well-defined and instantly recognizable. Facial expressions are a lot better than last issue, but there’s still a lack of consistency across the board when it comes to the dimension of a character’s face changing from panel to panel.

There are also some miscues with facial aging as young Jean looks like a teen in some panels and a more aged and mature adult in others. Even future Jean looks a little out of place — one would be pressed to guess she’s much younger than she should be based on her first panel this issue.

On the topic of art, Cam Smith’s inks look as delicate as they need to be to cover Lopez’s thin pencilwork. And while Smith is doing his job putting ink where he sees pencil, the lips of the female characters look sketched and cracked because of the overdone blotchy blacks.

Looking at color, it would definitely be interesting to see what the artwork would look like without Laura Martin’s contributions to the artwork because she adds a lot of dimension to the characters through shadows and wrinkles. Martin’s palette is a little muted, and besides the red of Jean’s hair and Cyclops’ ruby visor, there’s a plasticky sort of sheen to the book.

With chapter three finished, the ball is back on homecourt for Brian Michael Bendis’ Uncanny X-Men story. Overall, Battle of the Atom has proved to be an interesting and compelling crossover that’s connecting the various issues of the X-Books. When all is said and done, readers will judge the whole, and credit the X-Men creative team for a solid issue that’s not without its flaws. And however small or great those flaws, they don’t do much of a dent to the overall plot.

The story continues next month. As far as progression goes, there hasn’t been many battles to speak of and no mention of atoms. Still, it’s a fun ride. 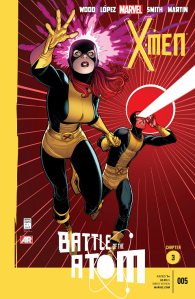 Buy X-Men #5 from Things From Another World!