A pair of paint huffers discover a monster attacking an animal control officer deep in the woods, and it leads to an investigation that will restore agent Fox Mulder’s faith in the X-Files.

Feeling the effects of the startling revelation in the first episode that the existence of extra-terrestrials was a government conspiracy, Agent Mulder spends a day poring over the X-Files, which no longer hold up to his newfound scrutiny — through new lenses, he sees it all as nonsense explained away by common sense. Scully offers him some sort of consolation — the duo are needed for an investigation of a suspicious lizard-monster.

The agents are arrive on scene after a transsexual prostitute is attacked, and they run into the animal control officer who’s out and about, looking for a stray puppy. The traumatized officer is scared out of his wits, hoping he doesn’t ever run into the monster again.

When an ominous growl scares off the officer, Mulder opts to pull out his smartphone rather than his standard issue pistol. Another corpse is found with a fresh wound, and the agents chase the monster into a porta-potty. But upon opening it, the agents find a dapper man with an accent.

Mulder returns to the motel and is woken up in the middle of the night by the frightened and wounded desk clerk. A search of one of the rooms reveals a bottle of clozapine, a broken mirror, a jackalope-head trophy thrown onto the floor, and an opening in the wall now revealed. Fox returns to the front desk where he questions the clerk who admits he’s been spying on his renters. During the clerk’s last jaunt through the walls of the motel, he spied an animated man yelling at himself in the mirror who then changed into a green, scaled monster.

The clerk sees a picture of the man in the porta-potty and verifies the identity. Mulder goes to Scully’s room with renewed purpose — a believer again, he enthusiastically argues both sides as Scully can’t get a word in otherwise.

“This is how I like my Mulder,” Dana says, nodding her head after he finishes talking.

The clozapine takes Mulder to the psychiatrist who prescribed it, and the doctor tells a story about a sheriff who kills a monster with green glass only to find out he was looking in the mirror all along.

“It’s easier to believe in monsters out there in the world than to accept that the real monsters dwell within us,” the Freud-ascribing psychiatrist says. He tells Mulder he prescribed the patient, named Guy Man, the clozapine and a quiet walk through a cemetery.

Meanwhile, Scully heads to a cellphone shop and finds Guy working there. She approaches him, and he suddenly tears through the shop and disappears.

Mulder explores the local cemetery and finds Guy standing over a grave with a paper-bagged bottle in hand. They talk, and the man suddenly smashes the green bottle over a gravestone. It becomes painfully obvious during the tussle that Guy wants Mulder to stab him in the appendix, and Mulder agrees to kill the man but only after a recap of events.

Guy begins his story the night of the first murder when he ran into the two huffers and the officer. Mulder interrupts and wonders why he doesn’t start at the very beginning, but apparently this is the real start of Guy’s weird journey as a giant reptile-like creature who becomes a were-man.

As Guy’s story goes, he was happily minding his own business when the animal control officer wrestled another man into the clearing. The officer inexplicably bit his victim in the throat before jumping Guy and biting him too. Guy frantically left the scene of the crime and bumped into the drugged up witnesses who gave the description that led to the drawing in Mulder’s hand.

Guy becomes annoyed that the drawing depicts him with three eyes and continues with his tale. He woke up the morning after with a new form — a human with a new consciousness. Overcome with a need to clothe himself, he finds three bodies, takes the clothes from one of them, and goes hunting.

Hunting for a job. 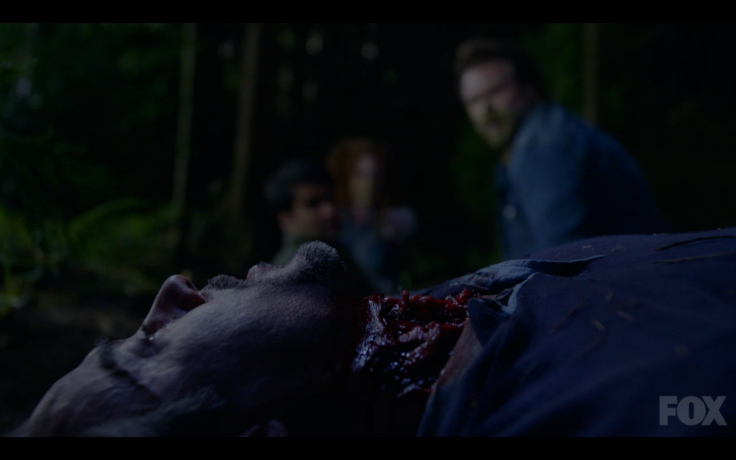 He’s hired as a cellphone salesman and gets promoted to manager within one day thanks to his human ability to BS people.

Mulder admits he finds the entire story hard to believe and continues to jump to sordid conclusions. Guy confesses to one murder, but it turns out to be a cow he ate in a hamburger.

The only thing that made him happy was a dog he adopted, which ran away. Guy’s search for the dog brought him to the marsh where he found the animal control officer chomping on another victim’s neck.

Mulder shows Guy the porta-potty picture, and Guy remarks that Mulder did look familiar when he first came to the cemetery.

Fox seems incredibly disappointed with the tale and explains several plot holes. Making it worse, Guy brags that a woman — Agent Scully — came into the shop and seduced him. Mulder calls BS, and Guy begs for death. The conversation shifts to Shakespeare and philosophy, and Guy says something poignant that hits Mulder right in the chest — that the world would seem a lonelier place if we knew all there was to know about it.

Scully calls Mulder to explain the test results, but the animal control officer attacks her. Mulder rushes to the scene and finds the situation already resolved. When the officer tries to explain what happened, he’s unceremoniously cut off and sent away with the authorities.

Mulder catches Guy Man walking back into the forest, and he lets Guy know he’s off the hook. Man explains it’s time to hibernate and that he hopes he’ll sleep off his were-human affliction.

“I want to believe,” Fox says. After Guy expresses he’s happy they met, they shake hands. Looking back up, Mulder finds himself making eye contact with a giant reptile-like creature with blood-red eyes. The creature dashes off, clicking his heels.

“Likewise,” Mulder says with a smile, and the episode ends.

It’s a wonderful episode that makes the strongest argument for why the X-Files should be picked up as a regular show, and it does so by poking fun of itself and winking at its audience who’s in on the joke.

Fox (the agent) dealing with a crisis of faith sort of mirrors the doubts fans felt when Fox (the channel) decided to bring back the show. In a world filled with reboots, relaunches, and rehashes, would the new X-Files end up another patronizing cash grab taking advantage of our inclination to live in the past?

This episode is a direct answer to the question: How can a show like this be relevant in today’s climate of conspiracy theories and mistrust of the government? When we see Fox grasping for an answer to his wish, “I want to believe,” we are right there with him.

And in the course of one hour, we do start to believe again. The hilarious dialogue, the absurdity of it all that somehow compels us to suspend our disbelief, and the imaginative roundabout that takes us for a journey. In the end, we’re rooting for something bigger, something that tells us mystery still exists.

In the end, everyone gets what they need most. The Guy’s runaway dog is rescued from the animal control officer by Scully. Mulder has his hope and purpose renewed. Guy finds a human friend.

And we get a fantastic episode that rewards us for giving this new limited run a chance.