The original X-Men have traveled through time and space.

And now it’s time to traverse the multiverse.

A day after being decimated by Galactus, Earth-1610 has begun picking up the pieces. Tony Stark invests in Amadeus Cho’s door to another universe only to watch as the portal disappears, and the lab’s computers are wiped from a sudden overload.

Back at the New Xavier school, Angel and X-23 return to find the elder X-Men are away and tending to Charles Xavier’s last will and testament. Warren Worthington III proves himself a gentleman when he doesn’t kiss and tell about his romantic getaway, and Jean Grey bonds with Laura Kinney over it.

When Beast uses Cerebro to find a mutant in danger, the All-New X-Men team decides to take initiative, coming to the aid of a young woman exhibiting strange powers. Everything goes black before Iceman finds himself underground in the presence of Mole Man. But it’s Grey meeting with Ultimate Spider-Man which tells readers we’re not in Earth-616 Kansas anymore.

All-New X-Men #31 as a whole feels like a bit of a letdown. It just seems a bit rough around the edges on both script and visual fronts.

Brian Michael Bendis’ dialogue doesn’t feel as polished or zippy — characters fill the air with explication and sound bites. When Jean tries to get a little personal with Laura, Kinney stammers away about not being that sort of girl who talks about her feelings. It’s the syntax and awkward wordiness that makes it read a bit clumsy, and it doesn’t help that Mahmud Asrar’s artwork looks so static and unappealing.

Not that Asrar is a bad artist — he’s actually really good. And the fact he’s a good artist only makes what I see look so drab and second-rate. The visuals in All-New X-Men #31 seem rushed and unfinished. For every panel with definition and character, there are several that fall flat. Part of it has to do with the eyes — asymmetrical and hollow, the characters’ tiny pupils make them look like they’re staring needles off into the distance.

I’m also not a fan of the recycled panels where only a few of the characters — or none at all — show movement. They cause the visual story to drag and without dynamic action to balance it out, the issue fails to enthrall the eyes.

Marte Gracia works his colors in, adding definition and features to faces and uniforms. Gracia isn’t at fault here, but the problems with the artwork are exacerbated because the shading only highlights the irregular face shapes.

All-New X-Men #31 introduces the plot and main conflict for the story arc, and without the last panel, it’s very run of the mill and unexciting. It isn’t Bendis or Asrar’s best work — a disappointment that’s compounded by the fact that they’re both exceptional talents capable of much greater things.

The addition of Miles Morales is something to get excited about — I just wish the entire issue had that sort of gravity to it. 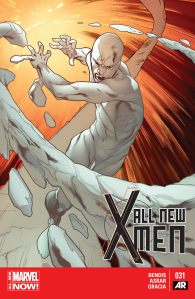 Buy All-New X-Men #31 from Things From Another World!