With almost every member of the X-Men teams convening in one location, tensions are incredibly high in Wolverine and the X-Men #36. As Wolverine contends with two Scott Summers united in their dislike for him, the two Jean Greys duke it out in a psychic war that takes out Emma Frost and her Stepford Cuckoos.

This is the issue readers of this crossover have been waiting for. For all the mystery and suspense, it’s become clear now what the various teams are in for, and the major plot twist finally brings in a strong conflict that adds a higher level of intrigue. 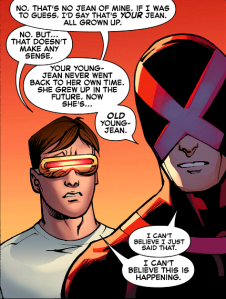 To understand what makes the developments so great, one only has to look back at classic X-Men stories. The X-Men in their many iterations have constantly fought against the status quo in their quest for change. Their plans to change/save the world have taken them through time, forwards and backwards.

From Days of Future Past to Cable’s journey forwards and then back into time, the X-Men are no strangers to time travel. Even Scott’s relationship with Emma Frost was initiated by Jean Grey who gave him permission in order to keep a dystopian future from happening.

In Battle of the Atom, for the first time in a long time — if not ever — readers get a glimpse of a positive future. By the looks of it, Hank McCoy’s decision to bring the classic X-Men from the past — a decision he now regrets — may have been one for the books because it may change the world for a better place.

Writer Jason Aaron gives readers a lot to work with this issue, and there are some inside jokes that will feel like nifty rewards for avid X-Men readers. From Wolverine calling the two Cyclopses Slim and Slimmer or older Summers  responding to the young Summers’ question of, “She’s killing herself! Why would she do that?” with the the answer, “It wouldn’t be the first time,” this issue comes packed with punch and humor. Aaron capitalizes by rolling with all of the conflicts and putting the rights players in the right spots. Wolverine, not the hugest fan of Cyclops, takes on two of them; young Jean takes on her powerful self; Deadpool uses his mouth to actually get others to stop fighting.

Though some of the dialogue seems a little unnatural and bookish, Aarons gets it right with the rest, and Wolverine and the X-Men #36 is a grab and go that definitely pushes the pacing and gets to the heart of the matter.

On pencils, Giuseppe Camuncoli puts together some solid panels to depict all of the madness and chaos. With the telepaths waging their invisible war, Camuncoli artfully brings to life what’s happening between the Greys, Frost, and the Cuckoos. The mental battle rivals the conflict happening in the physical world, and the blood leaking from the eyes and noses of the participants shows what kind of toll it’s taking on their physical bodies.

Andrew Currie’s inks look good, though there are some distracting lines and loss of details in some of the particulars. It’s not really a big problem, but if we’re going to put the inks under a microscope, then we have to say something.

For the colors, Matt Milla and Edgar Delgado’s work could have used a bit more thought. To make it easier for readers to distinguish the Greys during the mind fight, contrasting oranges and blues are used — one color for each of the Greys. In some of the panels, the color scheme goes out the window as the entire panel goes monochrome when one Jean overpowers the other(s).

There’s some dynamic lighting here that works wonderfully when it doesn’t look like a neon-light rave, but when it’s not sunset or an optic blast, the colors do get pretty flat. The airbrushed look with color grades don’t look too great on Jean Grey’s low-detail face or the Sentinels at the end of the book.

Minor gripes aside, Wolverine and the X-Men is the best of the bunch so far. It’s got a kicker of a story, and the action takes readers where they want to be — in the thick of it with members of three teams duking it out. The X-Men have spent a lot of time griping and coming to terms with old teammates/rivals/enemies. It isn’t certain that Summers and Logan will ever become friends again, and there’s no promise that the status quo — if there ever was one — will be restarted. After reading this issue, I wanted to go straight into the next issue.

Next Issue: Wolverine and the X-Men #37 Review

Buy Wolverine and the X-Men #36 from Things From Another World!