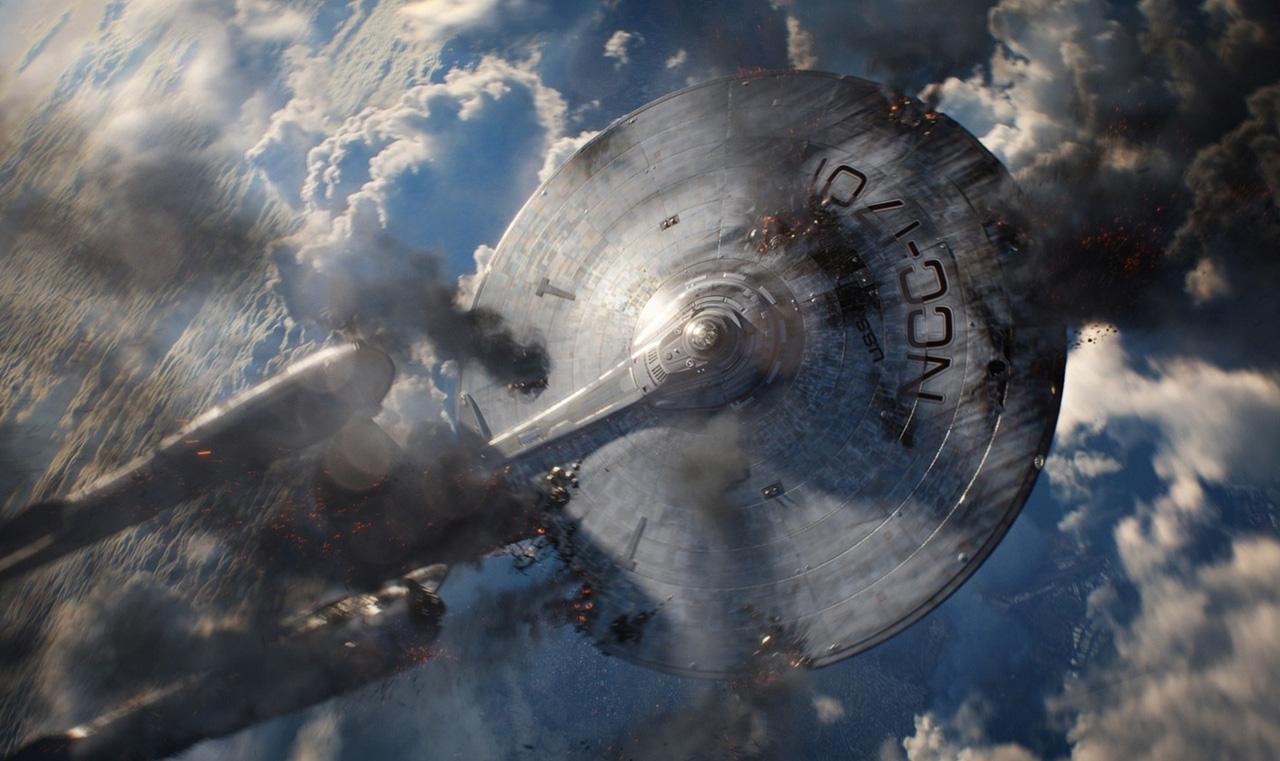 And it delivers in that department. It doesn’t even take long for the movie to put it into high gear — the first scene charges forward with a vista-filled foot chase on a foreign planet as Captain Kirk (Chris Pine) and Bones (Karl Urban) lead spear-wielding primitive lifeforms away from a planet-busting volcano.

The pair are in direct violation of the Prime Directive — the Federation’s number one rule that dictates a strict non-interference measure — and before the title gets its screen crawl, Kirk’s actions put himself in danger of losing his position as the Enterprise’s captain.

In that way, Into Darkness becomes a character study on Kirk — his brash and reckless ways influence and develop the characters around him.

After a terrorist attack blows up a secret Federation facility, emergency protocol calls for a meeting between the ship captains. An attack on Federation headquarters in San Francisco leaves a body count that includes Kirk’s mentor, Captain Pike, and identifies John Harrison, a war hero gone bad, as the lone culprit.

Kirk takes back command of the Enterprise and travels to hostile territory to apprehend Harrison, but things are’t as they seem as a mysterious new shipmate comes aboard (Alice Eve as Carol), and the ship is loaded with 72 experimental stealth missiles that can’t be spotted by Klingon scanners.

Kirk’s plan for a violent revenge is reluctantly stalled, making way for Harrison being taken as prisoner.

The first Star Trek felt heavy and urgent, and Into Darkness continues in the same vein, though to less effect.

The movie whisks from scene to scene, and there’s a sense of distance that’s similar to the effect of rollercoasters — they’re a lot of fun, but you miss so much because of the speed.

When it’s revealed that John Harrison isn’t exactly who they say he is, there’s also a feeling of loss, depending on which group you belong to.

For old Trekkies, the name Khan inspires fear. Some may appreciate seeing Kirk’s archvillain brilliantly embodied by Cumberbatch who delivers lines with gravitas as heavy as a black hole, but this new Khan has no backstory that puts him on the same level as Ricardo Montalban’s character.

For new fans, Khan is a superhuman threat capable of much harm — he shows it by crash-landing Admiral Marcus’ ship into the city of San Francisco.

The destruction is a glimpse into how far Khan’s willing to go to, but it’s action under duress — if only we could see Khan like he’s portrayed in the film’s early movie posters — standing unrestrained and in charge, overseeing the destruction he’s caused.

Star Trek Into Darkness can be considered as a sort of origin film because it feels like it’s setting up for more. There’s enough reason to expect Khan’s return in a future movie, and the movie ends where the show began — with the crew sent off on its first five-year tour of duty.

It’s a fun film with beautiful and mesmerizing set pieces.

It’s not perfect, but it’s nowhere near being a slouch. It’s got enough plot twists to keep brains working, and the visuals are grand.