Some war movies focus their attention on battlefield skirmishes reserving character development for the periods of quiet in between. War creates psychological havoc — it soils the innocent and damages the strong. The Hurt Locker, from the term describing a place of intense pain, follows a U.S. Army EOD (Explosive Ordinance Disposal) team in a unique situation away from the combat battlefields but in a place no less dangerous, physically or mentally.

With a little over a month left in their tour of duty, Sergeant J.T. Sanborn (Anthony Mackie) and Specialist Owen Eldridge (Brian Geraghty) are joined by Sergeant First Class William James (Jeremy Renner), a reckless and damaged leader whose ways suggest he’s crossed that thin line into madness. While the unit sees the light at the end of the tunnel as their release date approaches, James continues to press himself and the team into some harrowing situations. The synoptic scenes portray the various duties and situations the crew faces, and the circumstances test their resolve. Each man finds their way home in the end, but the journey has left a mark in each of their lives.

It’s a taut thriller with suspenseful moments that don’t come cheap. It’s one thing to run out onto a battlefield dodging bullets and mortar fire — it’s another to stare, let alone work on, an object that cannot be reasoned with and has the potential to level buildings. Disarming a homemade bomb, pulling the wires out and finding out what makes it work, is a visceral experience that makes one look inward. A personal inspection might reveal that the person in charge of saving the day also needs to be saved. 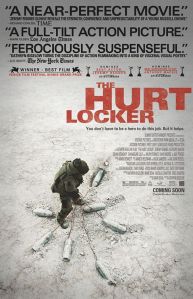 One thought on “Locked in Place — The Hurt Locker Review”

Let's go!! #iste2016
I will own this someday. Just kidding. Please let me be in one of your movies! I do a mean Igor.
A DVD rental area in the lobby of the Alamo Drafthouse theater. Convenience!
Checking out the Alamo Drafthouse in San Francisco for a Raiders of the Lost Ark showing. Beautiful decor.
no one was picking up mooncop for free comic book day, so i checked it out. discovered a really awesome book. highly recommended if you like thoughtful humor.
winners of the first ever free comic book day trivia contest at current comics.
Back to top
Loading Comments...
Comment
×
<span>%d</span> bloggers like this: