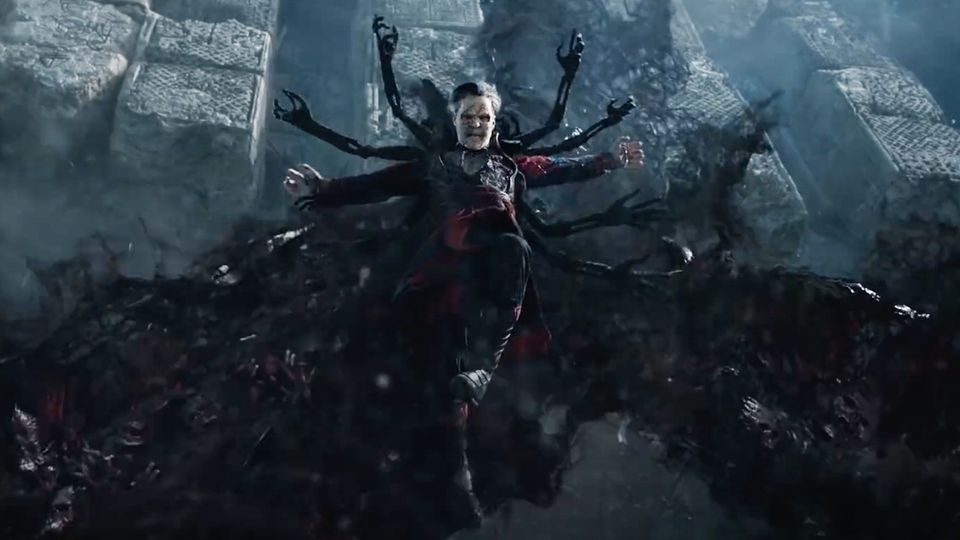 Dr. Strange takes a wild trip through the multiverse in this sequel to Spider-Man: No Way Home, WandaVision, and the animated What If series.

Traveling through the dimensions in the Multiverse of Madness, Dr. Strange goes on a quest to find a macguffin while protecting a macguffin against a friend turned villain as he comes to realize he’s been the villain all along.

Complicated? Not really. Convoluted? Sure.

Right now, the Marvel Cinematic Universe is doggedly jumping through every loop and loophole it can to make the next phase of its cinematic universe bigger and better. With Disney+ shows adding another dimension (lol!) to the mix in addition to the comic book source material, things — as dark Dr. Strange says in the trailer but not in the movie — really do get out of hand.

After almost obtaining the Book of Vishanti, Planeswalker America Chavez (Xochitl Gomez) lands on Earth-616, the home of our continuity in the ever-burgeoning MCU, as she barely evades capture from multi-dimensional demons. During a battle with a Shuma-Gorath look-alike (it better not have been the actual Shuma), she’s helped by our Dr. Strange who’s just come from seeing the love of his life, Dr. Christine Palmer (Rachel McAdams), marry another man.

Whoever is after Chavez wants to steal her powers, though Chavez’s ability — like the Hulk — only manifests when she’s under extreme stress.

Dr. Strange decides to pay a visit to the other resident expert of alternate dimensions, but it turns out Wanda Maximoff (Elizabeth Holmes), aka The Scarlet Witch, is — plot twist! — actually the one behind the attacks on Chavez.

Apparently, between WandaVision and now, Maximoff has come to realize she’s the worst version of herself in all of the dimensions because she doesn’t have kids. She plans on stealing Chavez’s powers so she can hop dimensions, steal the life of another Wanda, and finally have the family she’s been dreaming about.

What follows is an entertaining but not very thought-provoking story where director Sam Raimi’s trademark fingerprints are present all throughout, for better or worse.

There are jump scares, references to the occult, a higher level of violence, and Bruce Campbell punching himself. And though the movie is fun, quickly-paced, and hardly dull, it’s a jarring mix of scenes, plotlines, and characterizations that feel like they’ve been thrown together with the barest of reasons.

The movie also serves a vehicle to introduce new concepts and characters while also unfortunately devaluing those elements and the MCU at large.

Take, for example, the Illuminati — a secret cabal made up of the greatest minds on Earth. In the comics, the group was created to handle all major threats to the planet by being the ultimate deciders on how those threats would be handled.

The Illuminati makes their first onscreen appearance and quickly die after. Just as quickly as the familiar faces of Charles Xavier (Patrick Stewart), Black Bolt (Anson Mount), and Captain Carter (Hayley Atwell) are introduced, along with Captain Marvel (Lashana Lynch) and Reed Richards (John Krasinski), they’re brutally slaughtered by a dreamwalking Wanda who has taken over the body of one of her alternate counterparts.

While it’s exciting to see that Marvel’s acquisition of Fox has opened the door for the X-Men to arrive and be a part of the same universe as the Avengers — it also blew my mind that the studio hasn’t completely disowned the failed Inhumans television show — the introduction and death of Charles Xavier in quick succession had an unintended impact that might cause Marvel to rethink how it will proceed.

Just like the death of Superman sold a lot of comic books and his return ruined the permanence of characters dying, Multiverse of Madness gives us our cake and lets us eat it too. And it kind of sucks.

What if he appears as a version of Captain America with Chris Evans as Iron-Man?

How cool would that be?

Actually, maybe not as cool as it sounds. When everything can be anything, does anything matter?

There’s a lot of death, destruction, and madness in this multiverse, and some of it looks cool. But some of it — the handheld camera zoom, the blast door scene, and Dr. Strange’s third eye — don’t.

It’s a movie that I have no particular interest of watching again anytime soon. Maybe I’ve finally become too old for Marvel movies — I just don’t have the energy to sit through something so… tedious. There’s so much going on with very little payoff, and for every cool thing — Zombie Strange flying to Mount Wundagore with wings made out of the damned — there’s a roll-your-eyes moment, like Wong (Benedict Wong) waking up on the tiniest ledge after being tossed from a cliff and being left for dead.

Imagine riding a zombie-themed rollercoaster that stops every once in a while. When the main thing isn’t the main thing, things get forced into play that ultimately distract from the reason you went on the ride in the first place.

There’s a lot of namechecking and references that don’t really materialize or go anywhere, and it’s frustrating. At this point, one has to wonder whether we’ve been conditioned by Marvel.

And then, you’ll see Campbell break the fourth wall and tell you it’s literally over.

If the multiverse was real, would there be one in which we got a great Dr. Strange sequel?