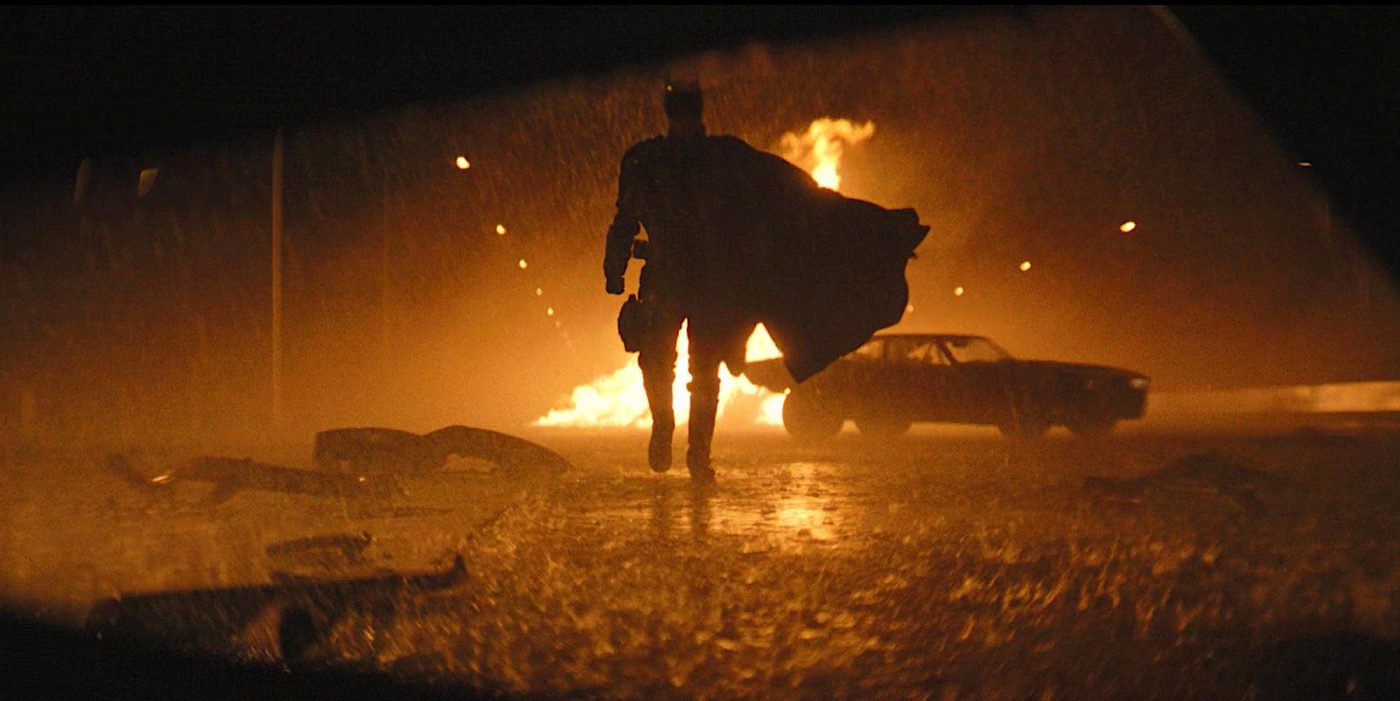 When a serial killer casts an imposing shadow on Gotham City’s corrupt political figures and their linked organized crime elements, it’s up to Batman to follow and decipher the Riddler’s clues which could reveal an explosive secret that threatens to throw the entire city into chaos.

Director and writer Matt Reeve’s realistic take on the caped crusader takes place during the second year of the character’s “Gotham Project,” well before the world’s greatest detective comes into his own. Playing like a noir-ish detective tale, except that our main character wears an armored black suit in the visage of a menacing bat instead of the traditional trenchcoat and hat, The Batman follows a hero-in-training who knocks on doors and investigates crimes in the presence of other police officers. He’s got gadgets, sure, like any detective with a billion dollars, but he’s very much human and grounded, susceptible to mistakes and hubris.

He’s also a bit of an introvert. Actually, that’s an understatement. Imagine Pattinson’s Batman as Kurt Cobain if he had taken up crime-fighting instead of music. When he’s not watching video recorded through his state-of-the-art contact lenses, Wayne reflects on his exploits and feelings in a journal, writing about life as a vigilante in a city that can’t get it together to save itself.

(There’s also the question of whether Gotham City even deserves to be saved.)

Batman makes his first appearance when he saves a man from a gang of face-painted clowns. When their leader asks the dark knight who he claims to be, Batman answers him with a swift and merciless beatdown that’s meant to scare the rest of his cohort straight while giving the anti-hero of our story an outlet for his intense seething rage. In case he didn’t get his point across, Batman makes it known: “I’m vengeance.”

The rescued man, not knowing what to make of his savior, begs not to be hurt. It’s clear that the average citizen in Gotham City doesn’t know whether the man behind the mask is friend or foe. What is known is that there’s something clearly wrong with him. Police officers defiantly stare him down when he walks into the room of Riddler’s first murder. He’s less scary man-bat and more freak in a suit at this point, which is a little bit jarring to see because of the superhero’s legendary status in and out of comics. It becomes very obvious that Reeves isn’t referencing any of the previous movies in any shape or form.

Throughout the entirety of its runtime, The Batman places its camera lens on or near the character. From the opening monologue spoken by Wayne reading from his journal until the very last shot, we see the world through Batman’s eyes and understand his intentions through his thoughts and methods. The featured villain Riddler is an intimidating foe who could make an appearance at any moment, but he’s largely kept a mystery hidden under his own mask.

There are other characters in the mix — the damsel, the under-appreciated but honest cop, and several named members of the criminal underground. Each of them are resources, whether by interaction or through clues left behind at the scene. As such, each one is an important element to the story, and the three-hour runtime on the movie apportions enough time to develop the world surrounding Batman.

That being said, by the time the credits began to roll, I was left a bit speechless because I didn’t know exactly how I felt about the movie.

What I did know was that The Batman is the most comic-book accurate Batman ever filmed. Ever.

But is that a good thing?

I’m inclined now to say yes, especially after I reckoned that my own biases may have kept me from saying I liked what I saw until I had some time to process and accept that this is a very deep take on the character, and it — like the past Batman movies — accurately reflects the state of the current generation it puts a mirror to.

Batman’s first take at a modern-day movie released in 1989, oozing coolness and excess at an endpoint to a decade filled with big hair, synth-punk, and glam rock. Part fantasy and part goth, Michael Keaton’s run on Batman was overshadowed by the over-the-top villains who stole the scene every time they stepped in front of the camera. Joker tossing money to the public against a backdrop of chemical factories and a conspiracy plot involving make-up products and commercialism spoke to the artificiality of the ’80s. Catwoman and the Penguin in Batman Returns were a perfect contrasting pair of politics and workers rights.

Burton’s films eventually gave way for Joel Schumacher’s campy and cartoony take during the ’90s. While we got Robin and Batgirl, I could not get over Batman’s ice-skating boots or his flashy Batmobile lit up with more lights than all of the Fast and Furious cars combined. Just as grunge died an inevitable and painful death when softer and more corporate rock acts took over, Warner Bros. killed the Batman franchise when it ultimately became a parody of itself.

Nolan revived Batman with a trilogy that’s held in the highest of superhero movie echelons. Its technocrat-with-a-conscience Wayne wanted something more — a legend to inspire the populous. The Nolan movies arrived in a period when, and were perhaps a response to, America had become engulfed in a seemingly infinite war against terror after the World Trade Center was attacked on 9/11. In Batman Begins, our hero takes his first steps as he faces a powerful group of terrorists sowing chaos using fear and paranoia. The Dark Knight continued with an exploration of several themes — truth in relation to justice and the cost of giving up freedom for security. The trilogy was bookended with The Dark Knight Rises — the culmination and final realization of Batman’s desire to see Gotham City rise to its own defense through unity and resolve.

Zack Snyder’s version, inspired by Frank Miller’s very dark The Dark Knight, was the most cynical and nihilistic of Batmen. He had given up on his ideals, resorting to gunning down entire groups of criminals from the safety of his Batwing and waging pre-emptive war on an alien super man who had the power to destroy the world but had shown in every instance he was willing to save it.

Reeves’ Batman is appropriately Gen Z — distanced from his parents, completely misunderstood, and misplaced in time. Despite claiming that his rationale for taking up the cowl and cape is in honor of his deceased mother and father, he’s somehow lost the plot and come to a point in his career as a vigilante that dying for the cause is a completely viable and preferable alternative to seeing his city die a slow diseased death.

There’s no Lucius Fox to walk him through a warehouse of goodies, and besides the contact lenses that record everything he sees, most of his equipment looks DIY and experimental. Things don’t always work as they should — his squirrel suit’s parachute gets him caught and tossed a hundred yards after he miscalculates a landing. He’s awkward, trying his best to channel everything we would recognize in a fully formed Batman, but you can’t help but question whether dressing up as a bat is the appropriate action for a traumatized grown man, let alone dive-bombing off a skyscraper and jumping into fights no ordinary man could handle alone.

Not once does Pattinson break so much as a smile during the movie, and why would he — the planet’s burning, politicians are wasting tax dollars while taking care of their own interests, and we can’t trust the public servants who are supposed to protect us. In a world of worst-case scenarios, Batman is a brutal and bitter avatar of vengeance who serves up the coldest dishes — when a witness turns up dead, Batman shrugs it off without hesitation and chalks it up to getting what she deserved because the witness worked at the bar where corrupt officials met.

But it’s consistent with a character who views everything as black and white — the good versus the bad, the saved versus the unsaved, and those who do versus those who don’t. Even though Wayne scours the city with the hopes of seeing something worth saving, he doesn’t realize until it’s almost too late that he’s just as hopeless and in need of rescue himself.

When he gets his face to face with the Riddler, he sees the direct consequence of his own actions — the Riddler, in a classic case of why you should never meet your heroes, pays tribute to Batman as his partner and explains his letters weren’t a part of the process of an insane villain compulsively leaving breadcrumbs for the protagonist — they were invitations to be an accomplice to his plans.

It’s a mind-blowing twist that puts Wayne in a tailspin trying to come to terms with a legacy that includes citizens taking up arms to create mass shootings in the name of revolution.

Ultimately, Batman must become something other than vengeance — he has to inspire Gotham City by becoming its hope.

The Batman exists on the top tier of Batman films. It’s remarkably well constructed — except for one single solitary scene that I thought was completely unnecessary (Joker, is that really you?). It isn’t the flashiest film or the most dramatic, but it remains true to the character in ways other films feared to tread. This is a thinking person’s bat-film, and while he’s as gloomy as they come, who couldn’t relate in this day and age to a character who feels like his last resort is to cosplay everyone’s worst nightmare?

Pattinson’s take is stellar, and the cast — every single member — is excellent. Colin Farrell’s Penguin gets a makeover as a mobster ready to take the reins of the largest crime family in Gotham City, and Jeffrey Wright as the Detective Jim Gordon is perfect. Zoë Kravitz as Catwoman puts a deadly and complicated spin on the character, and Andy Serkis does Alfred Pennyworth justice.

But Paul Dano’s Riddler is the best thing about The Batman. Menacing at the start, he’s revealed to be a young upstart whose normal speaking voice while live-streaming to his dearest fans resembles something you’d see on a Twitch stream late at night hosted by a wannabe professional gamer getting his footing. It goes to show that while there is a lot of power in youth and crowdsourcing, tapping it irresponsibly could lead to tremendous tragedies.

The Batman finds its footing within the in-betweens. If you’re looking for bombast or a narrative that hits you on the head, you’ll miss the subtle notes that hide a wellspring of thought. Like a good Nirvana track — Something In the Way plays at least three times in the movie — the more I think about the structure and words, the more I appreciate where Reeves is taking the character.

And the more I appreciate and think upon the direction, the more I want to get my hands on a copy of the movie so I can break it apart. It begs deconstruction. It’s ripe for peeling away the layers. After several decades of good and not-so-good Batman films, this one still manages to hit a nerve, and it delivers a substantially thought-out Bruce Wayne, inseparable from his alter (or actual) ego.

*A quick shout-out to my former Gonzales High School students. Did not expect to see them in another city at the IMAX theater. Even with our masks on, we all recognized each other. Miss you guys.*