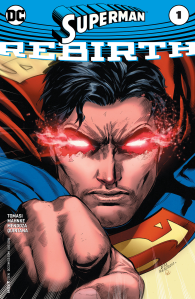 The Superman of Earth-Prime is gone, and the world comes to terms with the loss.

In Superman: Rebirth #1, Lana Lang and pre-Flashpoint Superman head to the New 52’s burial site to deal with his death in their own ways.

For Lang, it’s to keep a promise and have Kent’s body taken to Smallville, Kansas, to be interred next to his parents. For the original Superman, death is only another beginning. Having been reborn after being killed by Doomsday, Superman believes the same can happen to this timeline’s Superman — provided there’s a Fortress of Solitude with the proper resurrection tech.

Lang, who somehow gained the knowledge of the Fortress’ whereabouts when Superman died, leads the new (or old) Superman there. While they’re devastated to know that Superman cannot be resurrected, they honor him in their own ways.

Superman: Rebirth #1 seems geared as a primer — a way for new fans to jump in and for old fans to get caught up with the whole Rebirth thing going on. While, at best, it’s a moving tribute on the subject of existence if you can dig deep into it, the issue is rather cut and dry with an anti-climactic plot point that’s meant to establish more of the old continuity going forward.

For the original Superman, any potential death will be final. There’s no longer a failsafe if and when another Doomsday/galaxy-sized threat shows up. While his hope, at first, contrasts with Lang’s grief, both find common ground when it’s clear this is the end. Lang buries her past — literally — and the original Superman creates a tribute his counterpart and his deceased parents.

Upon finishing the issue, my first reaction was, “That’s it?” I wish there was more tribute to the Superman of the past five years, but we get a history lesson on the death of the original Superman that takes up more than a third of the book. And while I’m glad we’re getting all of his modern history and continuity back, I wish this whole process didn’t feel like something as big as Big Blue, who we’ve had to keep up with in the past half-decade, was being swept under the rug.

In regards to scripting, Peter J. Tomasi and Patrick Gleason keep things moving, though I wish there was more of an impact in terms of a development or some plot point going forward. We learn nothing about any of the characters, and the entire issue culminates with the last panel where the original Superman decides to become this timeline’s Superman. The execution of it is more morbid than inspirational — it’s almost as if Superman is trying to be a ringer rather than a hero, regardless of pedigree or name.

And where it comes to art, Doug Mahnke’s pencils come in two flavors, and it’s clear he’s put in more time on the Doomsday flashback because of the amount of detail filling up those pages. The rest of the issue looks a bit sparse with minimal backgrounds filling in empty panels of two people talking to each other. Imagine John Romita Jr.-styled blockiness without the composition, flow, or counter-detail. I was a little concerned before about DC’s plan to bring titles out bi-monthly, and now those worries have increased after seeing the art this issue go from 480p to 1080p and then back again. It’s the equivalent of a bandwidth spike while watching Netflix from a bad connection.

The same goes for Jaime Mendoza’s inks — when the pencil details hit 11, Mendoza’s inks are sharp and precise. The amount of cross-hatching and shaders at work in the flashback pages is ridiculous, and Mendoza does an excellent job securing the pencils to the page. In the Fortress of Solitude, however, Superman’s facial expressions have less detail than a lego figure. They turn into messy black splotches that don’t really help the story — case in point, in the Fortress when a featureless Lang asks a doll-looking Superman whether he’s all right. We zoom in to see plenty of detail and a bit of expression, but the panels before and after lack any punch needed to flavor the scripts.

And because the Fortress is an icy and sterile place, there’s only so much Wil Quintana can do to add atmosphere using colors. The rest of the issue in the underground tomb is filled with atmospheric lighting, and the flashback gets accents from the bright reds of Superman’s original suit and cape. Having the pre-Flashpoint Superman appear in a drab black suit doesn’t really help things — he becomes a shadow on the page — but Lana and her reddish-orange hair help things a bit. Quintana’s work is solid, and he makes the most of what he’s given.

At best, this issue shows the high level of talent that DC will call on to bring Superman into the next phase. At worst, we get a lackluster story that maintains the status quo that’s hobbled Superman comics for the last decade. Superman has been put in a t-shirt and jeans, overpowered, depowered, and now dead again. And through it all, most of it has had little impact on the readership who have been waiting for epic storylines with DC’s most epic character, or at least an amount of emotion to really strum those heartstrings.

The Rebirth timeline is a mix of old and new as characters pop up and memories are recovered. For those who became attached to the New 52, this issue is a way of dealing with the death. For fans of the old, you’ll be glad to know everything has returned to a place that’s close to where it should be. You can’t judge the next run of Superman on what’s contained in this issue because there’s hardly anything here that portends what’s to come. This is a bridge, a band-aid, a sticky-note memo. Those who miss it won’t be remiss, and those who care to read it won’t feel like it’s a total waste of time.