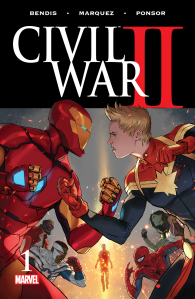 Prepare yourselves for war!

Hot off the heels of a Civil War movie — which, in turn, was based very loosely on the comic crossover of the same name — comes Civil War Part Dos #1. Written by Brian Michael Bendis with beautifully rendered panels from artist David Marquez and colorist Justin Ponsor, the next big event in Marvel history explodes from the pages of its first issue.

After Terrigen mist rolls through Columbus, Ohio, a new batch of Inhumans are born. One of them, Ulysses, gains the power of foresight and predicts a major invasion by a Celestial — or is it Galactus?

With the Avengers getting the heads-up and calling in all of its membership and various allies, the threat is averted, and Tony Stark throws a celebration to honor the victory.

Curiosity gets the better of Captain Marvel Carol Danvers, and the Inhumans decide it’s time to become a little more transparent. They introduce Ulysses to the Avengers, and Danvers makes a move to bring the human crystal ball onto her squad — which causes Stark to express his reservations.

Stark’s concerns about bringing Ulysses into the fold deals with plenty of questions. Tony attacks Danvers for welcoming a new acquaintance without vetting the young man’s intentions. While Danvers thinks the rewards are definitely worth the risk — harnessing the power of pre-empting major threats could save lives and keep the peace — Tony wonders about the ethical concerns regarding holding people accountable for actions they haven’t even taken. Absolute and blind trust in Ulysses’ powers could potentially lead to manipulation, whether by Ulysses or another power, and Stark decides to table the discussion and enjoy the rest of the party. 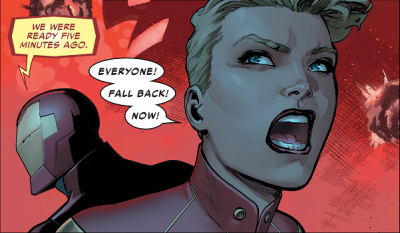 It’s hard not to take Stark’s side at this point. Tony doesn’t dismiss Ulysses outright — as the Avengers’ most pragmatic member, he’s for more research and finding the best answer in a cloud of questions. When Stark poses a hypothetical situation in which Danvers could be a named threat to the team, she’s unable to address the problems of wholeheartedly trusting an unknown and mysterious force that has just recently manifested itself.

Weeks later, when Ulysses receives another vision of the future, Danvers’ team springs into action. The mission is a technical success — Thanos is captured and locked up — but the team suffers heavy casualties that will no doubt cause a rift between Danvers and Stark that time may never, ever heal.

The last time I reviewed a Bendis issue, I didn’t have great things to say. He’s one of my favorite writers of all time, but his work on the X-Men series began to seriously wane as Secret Wars drew near. I know the man can write a good book, and I’m glad to say that Civil War II proves he’s still got it. When I first heard about the series, I may have rolled my eyes a few circles — but I take it all back. Civil War II, so far (so far!), is firing on all cylinders with a great premise, big shots fired, and plenty of tension.

The story gets a lot of extra help from Marquez and Ponsor — two of the best in the industry. Marquez’s art is consistently brilliant in every panel, composing epic scenes of action and emotion. When Tony appears at the Triskelion, his body language tells Maria Hill and Black Panther exactly how he feels. And in case they weren’t quite sure — he gives them a look of intense anger as pulls back the Iron Man mask to expose his tear-streaked face.

Ponsor’s colors add to the effect with warning-color reds intensifying the drama. Red stands for anger, blood, and pain — all three of which are exposed and expressed at the end of the issue. Ponsor’s shadows contrast against highlights to effectively set the tone for the story — while there isn’t much action in the physical sense, the hues help to shed light on the bitter turmoil existing and growing in the relationships of these characters.

This is, by far, the best thing I’ve read from Bendis in a while — which isn’t saying much because I haven’t read a lot of his stuff since X-Men. This is great stuff and exactly what I expect from a writer of Bendis’ caliber who knows how to play up point-of-contact type material by pitting friends and family against each other. A writer who knows his comic history and the inner workings of its characters can bend the story to his will by creating challenges them and solar-level frictional heat in between the surfaces. Kudos to Bendis — I am seriously excited for what’s coming next.

I expect more infighting as players choose sides, and it looks like Stark is going to secure Ulysses before anyone else uses his power. It’s a tough situation compounded by a fever-pitch emotional state that will likely result in plenty of regrettable actions by both sides. Strip away all the feelings, and you’ve got a situation where a threat was handled with unfortunate circumstances that could and would happen when handling a titan-like being of Thanos’ capabilities.

For Tony, the question is whether the mission was worth the loss. For Carol, it’s about the principle of the thing.

Either way, this war doesn’t look to be civil.