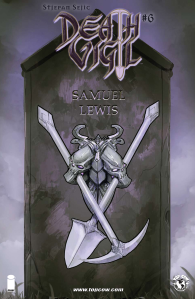 Until now, the battle between the Vigil and the Necromancers has been a tactical chess match.

A skirmish here and there, a minor power play elsewhere — the secret war has played out with pawns being traded as the Vigil shores up its defenses while the Necromancers continue poking away, looking for a weak spot.

But Maria Benes’ plan to take Bernadette’s scythe has finally come to fruition, and the Vigil must come to terms with an enemy that’s ready to take the war out into the open.

Last issue, an Orach was summoned in the middle of the city in broad daylight. This issue, the Vigil works in combination to contain the collateral damage and quickly remove the threat. One by one, the Necromancers fall thanks to some unique Veilripper powers, while Mia takes on the Orach’s fury and comes out with a full stomach.

As Bernadette pulls Sam Lewis back from rushing after a retreating Lord Asrah — and manages to save him from getting split in two from Orach debris in the process — Clara Jenkins uses her feather to try and be the hero. She finds herself quickly outmatched, but a mysterious figure saves her from doom.

Meanwhile in China, Lady Helena becomes a Lich, forcing the Vigil there to call Bernadette away from Sam and friends. Bernie orders her American team to head home because she can’t ignore the call, but an ambush squad led by former Vigil member Wulf takes advantage of the Bernie-less squad and quickly incapacitates everyone but Mia and Heinrich. Wulf has a one-to-one with Heinrich and persuades him to abandon his new allies, leaving the Vigil unable to secure their Veilrippers which are taken back to the Necromancers.

Death Vigil #6 is very cut and dry with a lot of exposition explaining and detailing the many crucial plot points at work. We learn more about Bernie’s role in the hierarchy of the Vigil and the limits on her power. Her scythe can only damage the more powerful of the Necromancers’ forces, up to a Lich, and her team must handle any lesser threats while she backs them up as a medic.

We also get insight into Maria’s motivation and why she’s willing to work with the Necromancers in exchange for Bernie’s scythe. Wulf reveals to Heinrich that he and Maria have combined their efforts to usurp Bernie after she refused to save Maria’s daughter’s life after a car crash. Maria believes the scythe can bring her daughter Alicia back to life, and by issue’s end, she takes the two things Bernie treasures most: the scythe and Sam.

Writing-wise, Stjepan Sejic has opted to give readers more background and reasoning this issue — which helps unfold the plot. Unfortunately, the delivery is a bit forced as the title’s natural storytelling flow is traded for character-narrated streams of exposition. The scripting isn’t as refined as usual, and another round of editing could have polished things up a bit. And that’s with the assumption that Maria mispronounces Bernie’s name as Bernardette because she’s a historian still wrapping her head around the names of things.

On the art side, Sejic’s graphics look a little rough compared to his previous efforts. Some panels look like they’ve been given the attention they need, while others look like they were rushed over. Overall, things still look pretty awesome, but I can’t help but wonder if time constraints held Stjepan from giving the issue more attention.

Even with a few rough spots, Death Vigil is still one of the best titles out there. With only two more issues to go in this story arc, the stage is set for an ultimate battle. Not only has Maria’s plotting taken the queen, the Vigil is very close to being checkmated. With all that’s happened this issue, I’m expecting a huge come from behind victory, and I hope Sejic is saving the best for last.