Jim Gordon jumps out of the fire and into the frying pan, so to speak, as he tries to capture Mr. Bloom.

In Batman #44, Gordon was about to be cooked alive, trapped in an industrial furnace firing at 1,000-degrees. Relying on his ability to throw a batarang, Jim makes it out, slightly toasted and a bit worse for the wear. All he has to do now is fend off the remaining members of the Four Fives who immediately overwhelm him.

Thankfully, the Batman mech-suit has an auto-pilot mode, and it comes to Gordon’s aid. After pushing back the attackers, Rookie takes Jim back to the Batman blimp, and he’s patched up for a visit with his boss Geri Powers.

Meanwhile, Bruce Wayne feels the pull of something greater. Working firsthand with underprivileged children, the desire to fix things has become too much to bear. Using his ingenuity, he takes much of the debris left over from Endgame and constructs a park for the kids.

Later on, Powers gets ready to announce a bigger and better Batman solution. Part of it involves firing Gordon after the Four Fives debacle that somehow made it to the news — the rest is about putting more mechanized suits on the street to keep the peace. Before she can finish her speech, Bloom crashes the party. 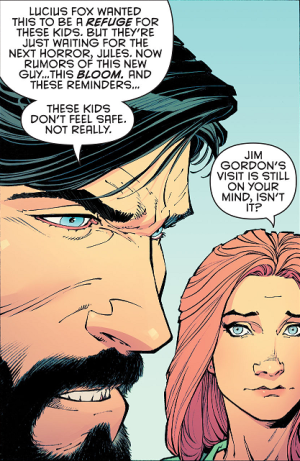 In terms of storytelling, everything is moving along naturally and with deliberate pace. Wayne, it seems, is slowly realizing his instinctive nature calls for something greater — to become a man for the entire city. Gordon, after being told he was relieved of his duties, can’t help but throw his body in harm’s way to protect his boss. This is how Scott Snyder taps into the hearts of these men to explore what really makes Batman — the symbol — so powerful.

It’s more than just an army of roving mechanical soldiers. Even though Wayne in some stories creates his own Bat-bots, the motivation is different — it’s the lengthening of his legacy rather than appropriation by a corporation to enforce the law. We can get into a long discussion about how old Wayne is a control freak who isn’t above using fear (shock and awe) as a weapon against criminal powers in Kingdom Come, but focusing on what’s happening here in the Superheavy story arc, we see his innate tendencies and desire to make the world around him a better place.

The setting of Gotham as a broken city struggling to return to form after Endgame adds another layer to the story. This is a moment ripe for a character like Mr. Bloom who can give even the most hopeless a chance at gaining raw superpowers. The temptation to control one’s surroundings is a powerful one, making Bloom a multi-dimensional villain who displays influence over his community along with the physical powers he shows off as he stabs Gotham’s elite with his needle-fingers. As Gotham rebuilds, a new villain emerges to take advantage of the situation.

Visually, Batman #45 continues to be striking. Greg Capullo, Danny Miki, and FCO Plascencia don’t have their names attached to any other projects, and i don’t think it’s a stretch to assume they’re being very well taken care of by DC to focus all their efforts on this one book. The Batman title has had the same visual team for a majority of its issues, and the consistency makes it one of the best books landing on shelves each month. At no point do I feel that any of the creatives are cutting corners or fudging it — the attention to detail, polish, and craftsmanship is a sight to behold.

As a single issue, Batman #45 is a solid one. As another chapter of the Superheavy story arc, it’s a great entry that brings us face to face with Batman’s current big bad. There’s a lot of drama unfolding here between characters, and the next few issues should ramp up in terms of excitement as the tension hits a peak. 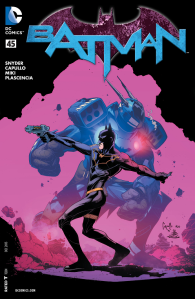 Buy Batman #45 from Things From Another World!