Sometimes the legend becomes so heavy, it drowns everything else out.

And after 75-plus years of amazing stories, the Batman series must be a challenge for any writer. I imagine the hardest thing about writing a new story is coming up with something that hasn’t been done before or hasn’t been done recently — something exciting that’s bigger and better than anything that’s come before.

That’s why I appreciate issues like Batman #44, which takes a break this month from the larger Mr. Bloom arc to tell a more personal and intimate story. Supervillains are exciting and attractive to readers, and Mr. Bloom looks to be another great addition to the rogues gallery. But an issue like issue #44 brings readers back down to the ground level where the foundation takes root.

Pulling from current events, Snyder and Azzarello tell a story of hopelessness. After finding the body of young Peter Duggio, Batman goes right to work chasing leads to track down the murderer. The boy lived in the Narrows in a section called the Corner, and the bullet-riddled body has been dropped from a great height.

Batman goes through his list of suspects while Commissioner Jim Gordon checks the bullets. Since Penguin has access to blimps, Batman decides to question the bird which in turn leads him to other suspects and clues that unravel a tragic chain of events.

It all began when Peter’s father became hospitalized. Peter, whose brother died as a member of the Four Fives gang, was left alone to protect the family business against the bank. Double-crossed by Penguin after making a deal, Peter sees his store being gifted to the local Four Fives gang. Powerless and hopeless, Peter decides to take matters into his own hands by searching out Mr. Bloom. Imbued by superpowers, Peter tries to take back his store only to see it completely destroyed. 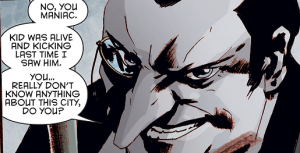 It’s a bitter story that shows how Peter has been failed time and time again — not just by criminals but also by the good guys. Batman learns his plans to renovate Gotham City created the spike in property values that made Peter’s bodega all the more valuable to the bank trying to seize it. In fact, Peter had once tried to approach Bruce Wayne for help, only to be ignored.

So Peter did the only thing he could — a young boy without a family, he tried to become a superhero.

The parallels are there, and not only do we see it as readers — so does Batman. Two young men on a journey to save what was important to them find themselves helped or hindered because of status, race, and class. And because Batman is a hero who oftentimes must be the avenger — it’s a bitter sting knowing he could have prevented all of this.

And that leads to a brilliant ending for the issue that, on the one hand, shows exactly why Batman is a symbol for the people. It also inserts a bit of dialogue from the writers regarding police brutality, racism, and the need for discussion rather than aggression and escalation.

At first, I thought the narrative felt a little bit clunky — the use of a third-person narrative seemed distant with a bit too much explication. By the end of the issue, I knew the emotional impact was realized because of the writing team’s decision to take that direction. Instead of following the thoughts in Batman’s mind with a first-person account, we get a little space to follow the storyline with a separated perspective. Batman doesn’t tell us how he feels — we read into it through the investigation and see it all on his face, thanks to Jock’s wonderful art.

I don’t know what the exact circumstances are for Jock taking over for Greg Capullo, and while I like seeing consistency with creative teams, I think Jock was a great choice — not that I think Capullo couldn’t do just as well. Jock’s artwork style is more abstract — Jock’s Batman is a wraith who is just as imposing flying out of darkness as he is visiting hospitals. And the balance between heavily shaded areas and minimalistic detail make for some dramatically composed scenes.

Amping up the dramatic effects, Lee Loughridge’s colors or the lack of make for some stark panels. I find it interesting that most of the brighter colors are reserved for Peter’s scenes when he visits Mr. Bloom and fights back against the Four Fives. The rest of the issue is filled with grays and less saturated hues.

In the end, we’re left with Batman stopping a group of teens who run at the sight of him. With a hand held up, Batman says, “Wait. Talk to me.” Those are words I don’t think I’ve seen in a Batman comic — not in this context and not with this much weight. When we think of superheroes, we tend to highlight their physical powers and their ability to punish those who do wrong.

Batman #44 reminds us that heroes are as much about — if not more so — helping those in need, and that we are all faced with decisions each and every day.

Buy Batman #44 from Things From Another World!