We’ve all played that game — the one that goes: If I could do anything I want…

Last issue, readers were introduced to Battleworld, a new Marvel world divided into various nations, each pulled from one of the myriad universes. Issue #2 showed us Higher Avalon, Bar Sinister, and the Deadlands — realms ruled by Captain Britain, Mr. Sinister, and the Marvel Zombies, respectively.

Barons ruled each of the civilized nations, put there in place by their head ruler — God Doom, an omnipotent master. It was Doom, Dr. Strange, and the Molecule Man that ventured to meet with the Beyonders to save the universes. The result of that meeting placed Doom as an omnipotent master with Dr. Strange working as his second-in-command at his side.

In Secret Wars #3, Dr. Strange delivers news about the various goings-on in Battleworld only to have Doom question his incessant need to make an account for every threat and every detail. Strange remembers the old universe and what it took to save what they could — he also remembers deferring the godship to Doom. Strange wants nothing more than to protect Battleworld and to keep the peace, even if the entire universe is built on the whims of one man.

After the Strange visits Utopolis, where a mysterious vessel was found. The investigating Thors were attacked last issue when the Cabal stepped out of the ship, and they sustained one casualty. Strange sends all but one of the Thors out to secure the intruders before he calls out to the hidden stowaway on the ship — Miles Morales, the Ultimate Spider-Man.

When Morales tells him about the incursion, Strange takes in the startling news — those on the ship remember the world as it was.

Back at Castle Doom, Susan Storm meets privately with the god-king. Susan’s recent trip to the Great Square has left her feeling uneasy — worshippers from the upper and lower kingdoms sang a song about the man in the sun as they returned to their countries. In truth, the sun used to be a man — Johnny Storm — who turned dissident. Susan chose her brother’s punishment, and he was lifted into the sky.

Doom confesses he isn’t the perfect god he wishes he could be. Though the world is perfect in his eyes, he does not have the power to inspire his people or to heal his own face. Huge kudos to artist Esad Ribic and colorist Ive Svorcina for the closeup on Victor’s face without the mask. The detailed damage — the hollow nose, the scars, and the broken teeth — along with the wonderfully textured colors brings out the full extent of the disfigurement, and the panel elicits a visceral and empathetic response.

Within the Sanctum Sanctorum of Dr. Strange’s Hidden Isle of Agamotto, Stephen takes the Thor and Miles to similar ship that he’s kept secret. Strange found the ship three years ago but was reluctant to open it because of the potential damage to Battleworld. Upon opening it, the heroes of Earth-616 come out — Star-lord, Spider-Man, Thor, and Captain Marvel followed by Phoenix Force Cyclops, Black Panther, and an emotionally damaged Richard Reed.  Strange brings them up to speed, and then we’re taken back to Utopolis where the Cabal discuss their next move.

It’s interesting to see Thanos standing around a campfire — and he exhibits particular calm as he tells the rest of the Cabal that the answers will come, which they do in the form of an army of Thors. 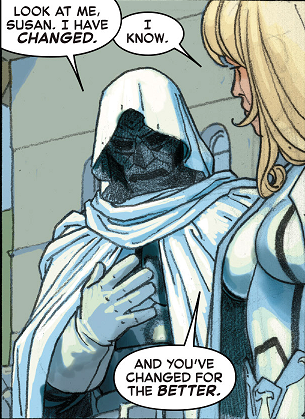 With all of the events happening this issue, Secret Wars #3 is an issue done right. Jonathan Hickman’s writing is brilliant with a measured plot that includes political intrigue, subterfuge, and twists to go along with an epic storyline that encompasses an entire universe. In a world ruled by Doom, it’s good to see the heroes as the one challenging the status quo — and it’s great to see the Cabal as a parallel and competing faction. And while we wonder how Strange could be on Doom’s side at the beginning of the issue, it’s familiar and comforting to see Stephen back with his former compatriots at the issue’s end.

The dialogue is fantastic, and the characterizations are wonderful, especially with Ribic’s artwork filling the panels with life and expression. Hickman puts a lot of trust in Ribic’s ability to tell the story visually — take, for example, Dr. Strange’s reaction to Doom criticizing him. With a subtle change in the eyes and mouth, we see all we need to see when Strange bears the brunt of Doom’s words, thinks upon them, and then says, “You’re in a damn tricky mood today, aren’t you?”

Ribic also surprises us with scope — in one panel, Doom touches a rock and creates a sculpture that would look lovely on any desk. The aforementioned view of Doom’s unmasked face will stick with you for some time, and the heroes’ faces dropping when they’re told that Doom was responsible for saving them works in stark contrast to Black Panther and Reed’s angry reactions when they learn how long Stephen left them in the raft. 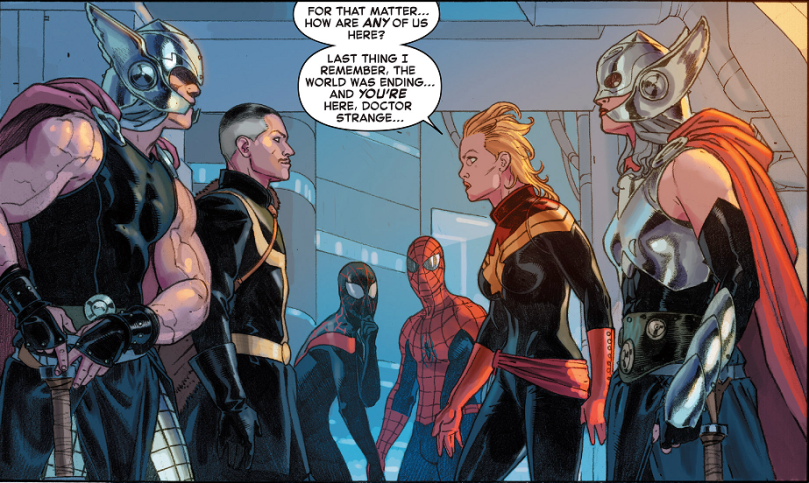 Svorcina’s colors on top of Ribic’s art really puts the finishing touches on the issue with a polish that adds levels of character, dimension, and lighting through lush and textured shades. In Doom’s scene, the shading looks like it’s been done in pencil all the way until that final reveal which comes in realistic colors. The visual twist helps to really bring it home, and Svorcina’s dramatic colors also give the visuals momentum in the end when a calm campfire is interrupted by a sudden flock of Thors.

Secret Wars has been amazing so far as it builds to a larger conflict that will likely result in the new Marvel status quo. Each issue has been well worth the price of admission thanks to beautiful artwork and a very well-produced story. So far, the Marvel reboot has been more like another chapter leading into something new — apart from those saved by Doom, the raft survivors are the exact same characters carried over from their universes. I’m excited thinking about the prospects of Reed meeting Susan again, Phoenix-Cyclops finding his X-Men, and and the two teams of heroes and the Cabal fighting against and with each other. A story as big as this one can go higher or fall down an incredible height. Let’s hope the series lives up to its name, the part that says War. 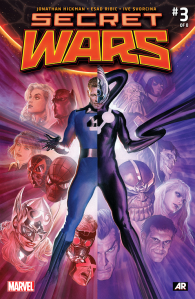 Buy Secret Wars #3 from Things From Another World!

Let's go!! #iste2016
I will own this someday. Just kidding. Please let me be in one of your movies! I do a mean Igor.
A DVD rental area in the lobby of the Alamo Drafthouse theater. Convenience!
Checking out the Alamo Drafthouse in San Francisco for a Raiders of the Lost Ark showing. Beautiful decor.
no one was picking up mooncop for free comic book day, so i checked it out. discovered a really awesome book. highly recommended if you like thoughtful humor.
winners of the first ever free comic book day trivia contest at current comics.
Back to top
Loading Comments...
Comment
×
<span>%d</span> bloggers like this: