Where Drifter #1 was a calculated noirish space western with a sincere narrative that hit all the right notes, issue #2 feels like a syringe filled with adrenaline going right through the heart.

i expected Drifter #2 to keep its steady but throbbing pulse as we find out more about Abram Pollux’s crash landing, his assassin, and his purpose in Ghost Town, but there’s something Hiyao Miyazaki about this second issue as it ramps up and takes off running. 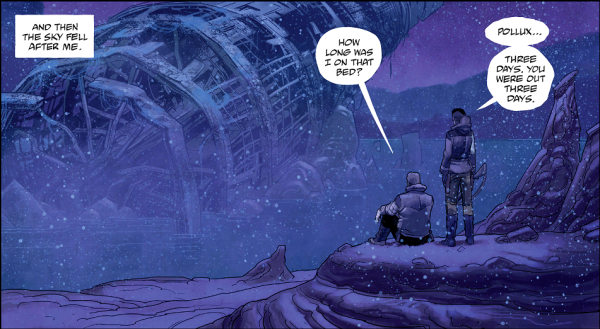 Last issue, Lee Carter dropped a bombshell on Pollux when she told him the ship he purportedly crashlanded in came to the planet a year ago. It was Carter who found Pollux on the beach with two gunshot wounds to the gut, but the timetables aren’t adding up — he couldn’t have survived longer than an hour, let alone a full year with those wounds.

Pollux argues that it’s his ship before scavengers break up the discussion. Pollux and Carter retreat to the water, and Pollux jumps in, hoping to swim to the ship and prove it’s his. Abram makes a beeline to his locker and pulls out a memento — a picture of a woman he was supposed to return to. The scavengers enter the ship, and a firefight ensues as electrified harpoons fill the air. When Carter and Pollux return to the beach, Lee decides it’s best not to enter the caves, and they move to hold the line and fight their enemies from the ridge.

That’s when lightning strikes. Pollux gets introduced to one of the planet’s various fauna — the bear, a creature that moves at the speed of light accompanied by violent strikes of crackling electricity.

The scavengers don’t stand a chance, and it’s only a matter of time before the bear finishes them off and turns its attention to Pollux and Carter. Jonah Tupu arrives in the nick of time, saving the two from a horrific death — and that’s it if they can make the return to Ghost Town where the tower will keep them safe.

After entering through the gates, someone alerts them that the tower’s been sabotaged. Pollux decides it’s on him to make the climb all the way to the top to restore power for the shields or the entire town will be destroyed.

The artwork by Nic Klein needs to be seen. Every panel feels dynamic, pertinent, and immediate. The line work is amazing with compositions that are epic in their conception. The coloring is also beautifully done even if most of the pages are done with a bluish palette. Atmosphere, like in the first issue, is key for Drifter #2, and the tone begins with a melancholic melody at the beginning of the issue. By the end, the midnight blues are broken by hot streaks of violent bursts of light.

The scripting by Ivan Brandon feels a little thick — there’s something about the syntax that makes the speech bubbles a little hard to read. Chalk it up to dialect — for instance, after Carter pulls Pollux out of the drink she tells him, “You’re not going to your grave the same day I pulled you out of it.” The next panel starts off a little awkwardly with, “Or kill us both for my trouble.” Depending on how your brain picks up that last sentence, you might do a mental double-take because I, at first, read it as a command rather than a choice.

That said, I love where the story’s going. At the end of this second issue, the assassin reappears, but this time he helps Pollux by creating a lightning rod. Pollux makes it up the tower on his second attempt, and he lives another day, looking for answers. That alone would be compelling enough to keep us until the third issue, but in the very last panel, Carter implores Pollux to tell her about the girl, acknowledging the ship was in fact his.

Like I said before, I didn’t expect the story to take this sort of turn, and I’m surprised at the angle — the first issue kept a steady beat while this second one felt like industrial metal over drum and bass. We’re on a journey with Pollux to discover not only his future but his past as well. The story has plenty of impact, and I would recommend it to anyone looking for a riddle to solve. 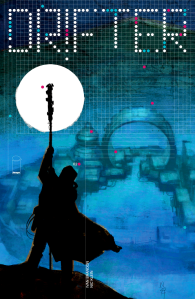 Buy Drifter #2 from Things From Another World!