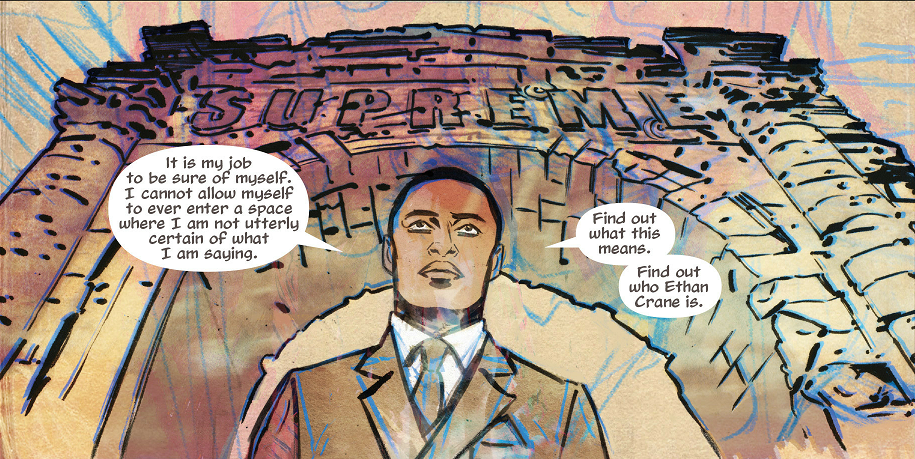 Back in the company’s early days, Rob Liefeld created Supreme as Image’s version of Superman. The character has since gone through multiple incarnations with several writers/artists putting their own spin on the mythos.

With Supreme: Blue Rose, it’s Warren Ellis’ turn, and the first issue sets the tone for the series by setting the perspective behind Diana Dane, investigative reporter, who wakes up from a strange dream.

The mysterious dream, which seems a bit prophetic, introduces Dane to several characters with curious backgrounds. It also establishes the basis for the story — the recurring theme of alternate and separate realities that ultimately gives the creative team a blank slate to do as they will with the Supreme universe.

After waking, Dane travels to see Darius Dax, a shadow broker who deals in intelligence. There’s an interesting contrast between the unemployed investigative journalist and a wealthy man whose expansive knowledge of the world’s affairs would cripple anyone who suddenly saw what else was out there.

Dax proposes a cooperative venture with Darius providing the financing and Dane doing all of the footwork. The mission: Find out who or what is associated with the golden sign in Dax’s office — the one with the word Supreme.

Darius has footage of one Ethan Crane who suddenly appears as a luminescent being. It’s possible Crane is connected to the events of Littlehaven when something unknown fell out of the sky onto the town, and Dax must discover all there is to know.

To help her and keep her safe, Dax sends Reuben, a man born with a peculiar birth defect that few can see directly. Reuben is a professional shadow, and he tells her the next time she sees him, it will be when she’s in danger.

As a starter, Supreme: Blue Rose #1 is a densely-packed issue with intelligent dialogue and keen insight into the lives of its characters, particularly Dane and Dax. The scripts for Darius are especially brilliant, and there’s no pretense from Ellis — Dax exudes power through his tactful self-aware speech. Diana, on the other hand, is in a state of flux as she contemplates taking on this new contract. Financially, it’s a huge boon, but an investigative journalist working as an private investigator crosses a few lines, and it could lead her into territory where she might not want to go. 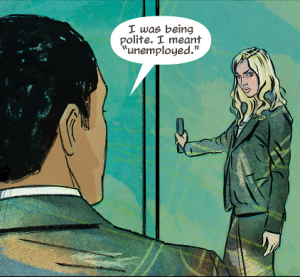 It’s a classic case of comfort zones. How many of us know others who talk a big game, but when push comes to shove, they let opportunities slip away? Diana’s conflict comes from being tasked to use her talents on a grander scale. There’s a lot more rewards in store for her, but the risks are greater as well.

Ellis’ words are beautifully matched with Tula Lotay’s panels that fuse classic-looking pop-art pencils with lush colors and contrasting scrawls that connect all of the pages. The scrawls are like a wind blowing through the scenes — or the notes reverberating from Ellis’ string theory as the universe constantly creates itself with each passing moment.

Supreme: Blue Rose #1 is a great first issue that starts with the basis — and I’ll use Supreme’s original inspiration — of what it’s like to exist in a world with Superman, looking up from the ground. This is a Lois Lane type of story that puts the emphasis on a human contending a mysterious force that could save the world or upend it.

Who she aligns herself could determine her own fate in the matter. 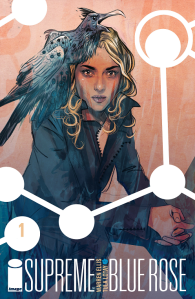 Buy Supreme: Blue Rose #1 from Things From Another World!