Uncanny X-Men #23 kicks off a new story arc with some forward momentum carrying over from the last issue.

Issue #23 is a straightforward issue with, presumably, some tie-ins to the Original Sin crossover event. It begins with a flashback when a sudden Skrull invasion causes plenty of collateral damage.

Back to the present, Jennifer Walters, aka She-Hulk, goes about her life as a superpowered (literally) attorney until she receives something in the mail that demands her attention — spoiler: it’s on the issue’s cover.

The titular Uncanny X-Men are split into two camps with the elder members — Magneto, Emma Frost, Magik, and Dazzler — venturing to Madripoor on the hunt for Mystique. Dazzler has a giant bone to pick with her former captor, and the brightest (again, literally) X-Man definitely shows trauma from being held against her will as a drug source.

Back at base, Cyclops, the All-New X-Men, and the new recruits train and deliberate. Cyclops’ thoughts go from maintaining watch over the Earth to the inescapable memory of Professor Xavier’s death until he’s interrupted by Eva Bell who still hasn’t explained what happened to her back in issue #17 when she disappeared for a moment in time.

Not that she needs to explain anything to Scott Summers — the Stepford Cuckoos have already give him all the information after reading Bell’s mind. And while Summers has proven to be one of the great Marvel generals, he still hasn’t figured out a way to keep the opposite sex from storming out of the room. I have a feeling this relationship is going to be a big deal, and I’m hoping it’s as big a bombshell as I’m expecting. 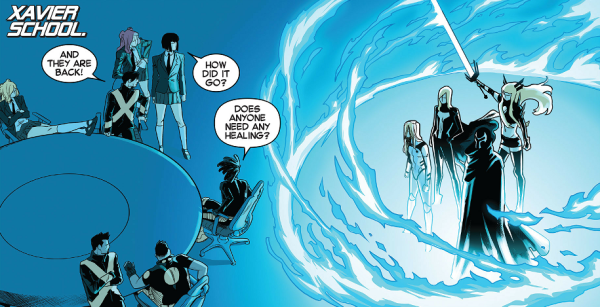 At Jean Grey’s School for Gifted Youngsters, Walters gets to work because it’s time to give everyone what they deserve, according to Professor X’s wishes. The one person they need present — you guessed it, the golden boy himself, Cyclops.

There’s a lot to like about the issue even if it feels a bit like a preview for what’s to come. Brian Michael Bendis has created a torrent of plotlines, and it seems as if the various titles are back on a collision course. There’s a magnetic center surrounding Cyclops, and a lot of it has to do with the events of Avengers vs. X-Men and its aftermath that have been developing/simmering.

What’s in the contents of the will can only be guessed at for now, but I wouldn’t be surprised to see the New Jean Grey School being passed to Cyclops, causing a good bit of drama there. Not that I think Cyclops would take it — he seems content waging guerilla warfare from his secret base.

And while there could be good news for Summers — a bit of poetic justice in the face of those who’ve disowned him — the world around him is falling apart, except for Hijack’s re-enrollment which, depending on how long he survives, is a coin flip. Dazzler’s hit a breaking point, and a pair of scissors and some smeared makeup might do well in destroying that superstar image she feels miles away from.

There’s also the story of Matthew, the widower who barely survived the Skrull attack. Apparently, he’s gotten some new and out-of-control powers that will likely bring him some unwanted attention.

Artist Kris Anka takes over for Chris Bachalo, and the two styles couldn’t be more different. Anka’s all-in-one duties cover the entire gamut from pencils (or digital pencils) to colors, and compared to Bachalo’s recent pages looks much more minimalistic on its surface.

But when it comes to expressions, Anka’s artwork has a greater range, especially for Cyclops who comes across as less grim. In his one-to-ones with Eva and David Bond, we get to see Summer’s softer and more diplomatic side, even if his communication skills lack a certain sensitivity.

Anka’s compositions, however, feel a bit anemic due to the repetitive panels. The trim line work contributes to details looking a bit thin and sparse.

Colorwise, things look great, though I have to wonder if the glow-in-the-dark red security stripes on Cyclops’ outfit are practical. Everything else is high contrast and polished, and Dazzler’s mental breakdown is beautifully illustrated.

I’m excited for the current direction, and for that, the issue gets some praise. Pacing is solid, scenes — story and sequentially — are easy to follow, and there’s a broad sense that these things will matter.

As a standalone issue, however, this one won’t matter much to the person who will only buy one comic for the entire year — and if you are that person, I am sorry. For the rest of us, it’s a great jumping on point that points to the future — one of character development, drama, and more action. 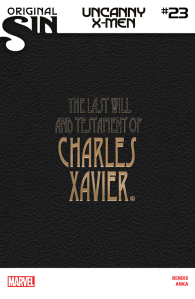