One thing thus far has united the X-Men squads together: S.H.I.E.L.D.

For months now, Cyclops has been dogged by a mysterious threat hunting down his Uncanny X-Men with advanced Sentinels. Last issue, S.H.I.E.L.D. and their helicarriers converged on Scott Summers’ location at the school as the villain’s plan came to fruition.

Uncanny X-Men #22 picks up right where the last issue ended with an unknown aircraft landing at the New Xavier School.

It’s Magneto, and he’s brought Dazzler to the best healer he knows: Triage. Magneto explains what he’s seen, and he has strong words about Mystique who’s now at the top of his hit list.

Back in New York, onlookers watch as the Jean Grey School is bombarded by a fleet of helicarriers. I mentioned it in a previous issue that we hadn’t seen the last of Hijack, and if there’s anyone besides Magneto who can bring the situation under control, it’s the former X-Man looking for redemption.

From here on out, we get a very heavy helping of plot resolutions and development that’s plenty satisfying. Hank McCoy flushes Summers of the Nanotech Sentinels that have been interfering with his powers, and he’s also traced the advanced technology to its creator who’s been hoping to be revealed all along: Dark Beast from the Age of Apocalypse.

As Dark Beast dies from being exposed to the elements, he points out how messed up the relationship between McCoy and Summers has become. The two former teammates have found themselves on opposite sides, but it’s very apparent that McCoy is the aggressor with a grudge to bear — one that has now produced one Beast as a casualty.

The “war” ended, it’s time to track the score. Seeing that a version of Beast is behind the attacks, Maria Hill blames “you mutants” for adding to the problem before putting all of the X-Men on lockdown. Cyclops won’t have it, and he cuts Hill down a few notches by pointing out her failure to do her job — which is: protect the world. Cyclops’ point is predicated on the fact that the ships under her command were used to create a lot of destruction.

Adding to Hill’s shame — when Alison Blaire, has her turn to speak, she declares where her allegiance now lies: the X-Men. Blaire’s about-face makes sense because Hill’s mission thus far has been to track down Summers at the expense of all else, while the X-Men in their various forms have been rather proactive despite the controversies. The difference led to Blaire’s rescue as opposed to her kidnapping and being turned into a drug producing zombie with no one from S.H.I.E.L.D. ever the wiser.

And with that, a major story arc comes to a close with several plot threads coming together. Brian Michael Bendis has put this chapter to rest with some major ripples moving out from this epicenter.

Now that Cyclops has been cured of his mutant power blockers, it stands to reason that Emma Frost and Magneto will be cured of theirs — which only makes the Uncanny X-Men that much stronger. And Mystique’s in that much more trouble with a full-powered Magneto who’s put a big juicy target on her back.

For Hank McCoy, seeing a dead version of himself is probably a sobering occasion, heightened by the fact that the Watcher chewed him out in their last encounter. McCoy might be on his high horse, but he’s definitely a headless horseman without a solution or indemnity in the matter.

Balancing all of these and coming up with solid closure speaks to the fact that Bendis has a long-term plan in effect, and he’s working his way through all of the complex storylines. I’m glad to see a story arc end powerfully with lines drawn in the sand. Things feel a little more optimistic heading forward, but how long that lasts will be decided in the arc to come.

Chris Bachalo’s art is strong this issue, particularly in the wide-angled shots of the helicarriers bringing destruction down on the school. There’s so much detail in the nitty-gritty, and thanks are also due to the six inkers working on the panels. If there was one point of criticism for Bachalo, it’s in the facial expressions of Hill who seems a little reserved. It would have raised a lot of tension to see Hill giving orders with a bit more emphasis.

On colors, Bachalo gets some help from Jose Villarrubia. Overall, it seems very Bachalo-ish with the monochromatic panels washed in purples and greens, broken up by highlights. I’m guessing Villarrubia was responsible for the first few pages with their spot-textured skies and muted palette. It’s interesting to see the pencils layered by another hand’s colors, and I enjoyed the more subtle approach.

As mentioned before, six inkers — Tim Townsend, Marc Deering, Mark Irwin, Jaime Mendoza, Victor Olazaba, and Al Vey — brought their pens out for the X-Men vs. S.H.I.E.L.D. war. With all of the lines and detail, I wonder how many bottles of ink it took to put Uncanny X-Men #22 together.

Next issue is an Original Sin tie-in with a look at the last will and testament of Charles Xavier. That’s a plot point that’s yet to be addressed, but with the stops pulled, Cyclops and Emma are now moving full speed ahead.

To which direction, it’s unclear — but the future looks complicated. In a good way. 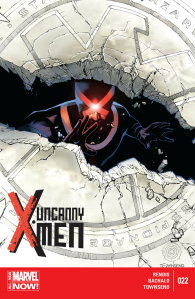 Buy Uncanny X-Men #22 from Things From Another World!