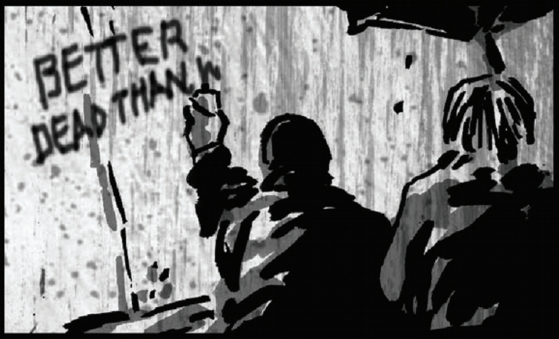 I was first introduced to Andrez Bergen through the Comic Book Community on Google+. A fan of comics, Bergen has worked with artists from around the world for several stories.  He’s also a novelist and a musician — a sort of Renaissance Man.

Corresponding with Andrez, I’ve become acquainted with a humble yet confident author with a range of interests. I’ve had the honor of reading Black + White, an anthology of Bergen comics that share a common thread — a love for the noir genre. With a sharp wit and a handle on the written word, Bergen’s stories come across as multi-dimensional with subtext hidden in between the lines. There are twists and turns that leave you hanging, which only serve to prove that you’ve been noired. Bergen’s passion for the genre is plain to see, and the stories lend themselves to several readthroughs.

Check out Black + White for a mere $1.00 after you read this interview.

First off, can you tell us about yourself?Sure — I’m an Australian, born in Melbourne, who’s lived in Tokyo for the past 13 years. I do electronic music (as Little Nobody), I’m a journalist, and I write novels and do comic books. I’m a dad (my daughter is eight), I love sashimi and chocolate, along with beer and saké. I used to run IF? Records for about a decade and now co-run IF? Commix. Reading-wise, I’m right into the older detective-noir of Raymond Chandler and Dashiell Hammett, and with regard to comic books, I worship at the artistic altar of Jack Kirby, Jim Steranko, Frank Miller, David Aja, Matt Kyme, Barry Windsor-Smith, and Steve Epting.You’re an Australian living in Tokyo, Japan. Can you tell us about how you ended up there?I came here basically to pursue my music and journalism careers — since electronic music has so much of its roots in Japan (think Yellow Magic Orchestra, Fumiya Tanaka, and Merzbow), and one of my specialties as a journalist is manga/anime. I also teach English over here to cover the bills, ended up meeting my wife Yoko, love the place, and stayed.You’re a novel writer. Did you start off doing novels before going to comics or the other way around?I’ve actually been writing short stories and novels since I could hold a pencil, from early primary school, but I started making my own comics a bit later in high school. The writing has been a continuous thread, whereas comic books have been a haphazard passion. Then again, I was publishing a comic in the TAC Insurance newsletter in Melbourne way before I published my first novel (in 2011).

Black + White is an anthology that’s aptly titled. Not only is the artwork in black and white, but I’m assuming it’s also a nod to the noir genre. What is it about the genre that makes you want to tell these kinds of stories?Definitely it’s that nod to noir. I mentioned that, literally speaking, I’m a big fan of Chandler and Hammett, and also Cain. And I love hardboiled cinema, from the old films with Humphrey Bogart and Lauren Bacall, or by Akira Kurosawa — ‘Nora Inu’ is sensational — to contemporary versions. Noir’s dateless and can be applied to so many genres. Canny dialogue and offbeat characters are essential to good noir yarns, and the finale in no ways needs to be a happy one or even final. It leaves a lot to the imagination and is usually a darker ride. I find it downright energizing, and I know people like Ed Brubaker feel the same way.The stories end on cliffhangers with a sort of unexpected twist. From inception to finish, how do you approach these stories?They’re actually intended that way — short riffs that bounce out of my first novel ‘Tobacco-Stained Mountain Goat’ but with new characters and intended as standalone tales. All of them began as short stories that ended up in the anthology ‘The Tobacco-Stained Sky’ (2013) either as written or sequential art pieces. I approached artists I liked and asked them if they would be interested in working together — and I was very, very lucky. I thought the stories deserved to be seen at their proper size rather than the much smaller paperback anthology they were originally printed inside. And I love the diversity in visual styles.Can you describe the process you went through to choose/collaborate with the artists? I know of several writers looking for artists, and you’ve worked with a good number here. I also noticed you did the art for one of the stories. What was it like creating the visuals for your own story?Basically, I approached artists I already knew for their other work — Drezz [Rodriguez], for example, for his online noir comic ‘El Cuervo’, and Michael Grills has done stunning work with ‘Runnin’ With a Gun’. Nathan I knew through his graphic novel ‘Baja’. Marcos and Andrew I discovered from work on their sites. When I thought about each story, I tried to imagine which artist would be the best work with which scenario. My own story was a great chance to bounce back into doing the visuals, since I’d taken a breather for a long, long time and to test out new digital technology in the process. It was a great warm-up for the ‘Tobacco-Stained Mountain Goat’ graphic novel I’m currently assembling and pretty easy to bounce out of my own words.

What’s your view of comics in general, living in a country that cherishes the artform — an artform that’s vastly different than Europe and North America?Oh man, I love all comic books — so long as they’re good. I grew up early on British comics, ‘The Phantom’ and Tintin, and discovered Jack Kirby and Stan Lee’s Fantastic Four when I was about six or seven years old. That segued into the manga I found in Australia, most of them by Katsuhiro Otomo, Yukito Koshiro, Kazuo Umezu, and Masamune Shirow. I love the storytelling differences that occur between countries, and the people who try to push the perimetres and disregard the “rules” — like Otomo, Umezu, Will Eisner, Kirby, Steranko, and David Aja. It’s all great.