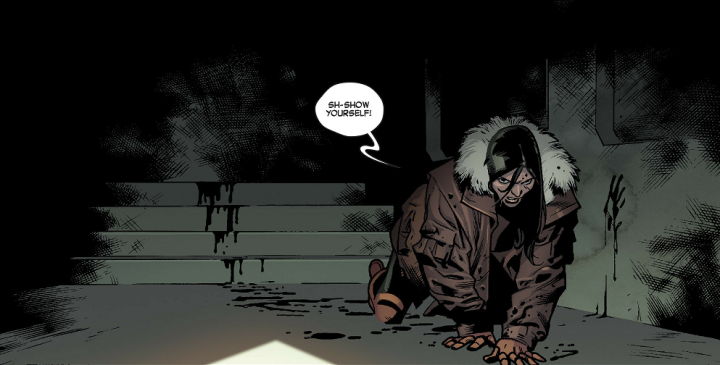 Cyclops’ departure from the classic X-Men squad leaves the rest of his team reeling as they seek answers in the wake of Jean Grey’s trial.

In All-New X-Men #26, we finally get some alone time with the elder Scott Summers and Jean as they discuss what’s been going on in everyone else’s minds, and the topics range from their current mindsets, drawing boundaries, and planning for the immediate future.

The private conversation adds a lot of pinpointed details, and no time is wasted on disposable chatter. Cyclops divulges he’s been preoccupied thinking about, well, everything — from the jealousy he feels for his younger self to the predicament Hank McCoy has dug himself into. Even in his personal relationships, Cyclops is still a tactician, thinking of every detail and trying to find solutions. That characteristic plays an even bigger part now because the main problem in the X-Universe is Cyclops — accused murderer and guerilla fighter whose relationship with his former friend gets some play in the latest issue of Uncanny X-Men.

And it would startle Hank McCoy to know that young Jean actually digs this new Cyclops, far flung from the awkward teenager version. The sentiment seems to mirror fan reactions applauding the numerous changes the character has gone through since Schism. The boy scout no longer, Cyclops’ has gained some depth in the past few years.

The one to one between Summers and Grey also brings up one pertinent point that’s been — until now — unasked: “Why don’t I remember this happening to me if it’s happening to my younger self?”

Who knows what Brian Michael Bendis is planning for, but it’s a loaded question that will need to be addressed later if not sooner.

While Summers and Grey hash out what kind of training she’ll need and how distant they need to remain physically, Warren Worthington III follows Laura Kinney as she leaves the team.

Obviously upset that her love interest bolted from the team without giving her closure, Kinney shrugs off her tail and treks the snow-covered mountains alone until she runs into none other than Cyclops.

Actually, it’s not Cyclops because he does the unexpected and guts Laura, leaving her for dead. It’s not Mystique — no, this is something familiar, and how fast we’ve forgotten.

Behold: The return of the future X-Men has come.

I’m glad to see things moving in a forward direction. It’s been a while since Battle of the Atom ended on an unsatisfying note which left a lot of threads untied. Instead, like Pandora’s box, the crossover’s conclusion opened up a huge can of worms that created a mess for a future time.

And I really want that future to be now.

Joining Bendis are the rest of the members of the creative team which, kudos to Marvel, has remained intact intermittently throughout the series’ run. I’m glad to see that 20 issues in, we don’t have a total team dissembling as the team of Stuart Immonen on pencils, Wade Von Grawbadger on inks, Marte Gracia on colors, and Cory Petit on letters forms a cohesive unit that’s more than capable of bringing the X-Men to life.

On Immonen’s pencils, they seem a little less refined this issue — which could be a side effect of having a bi-weekly issue. Still, we have wonderful panels — the scenes with Hank McCoy problem solving on his chalkboard and the exchange between Scott and Jean,  standing out in my mind — with composed shots that show us exactly what we need to be seeing.

Grawbadger’s inks are as distinct as ever with its complements from Gracia’s bold colors which look a little muddier this time around, but that’s most likely due to most of the issue taking place in the confines of Project X. The flesh tones look a little bland — just sayin’ — but I would still love to have Gracia on my comic book fantasy team.

Overall, it’s still an above-average issue that still proves All-New X-Men is a solid title worth putting on your pull-list if you’re an X-Men fan. I’m for having interactions between the elder and younger X-Men, and I wish there was more of it. We get these great snippets that are well-written and edged, but there are so many characters and plot points that need to be addressed — I just wanted to hang out with Scott and Jean for just a little longer because there’s so much going on in that negative space.

And that’s what makes this series great. There’s a lot of subtext thanks to Bendis’ scripts, and it doesn’t hurt that we get visuals from a team featuring some of comic’s best.

Let’s hope the momentum carries as the three squads from different times look like they’re on a collision course.

Buy All-New X-Men #26 from Things From Another World!