No closer to the Sentinel attacks that have become more vicious and personal in nature, Summers uses the Stepford Cuckoos to tap into Hill’s brain to reveal that she’s actually attracted to him.

It could all be a ruse, but Summers won’t take anything for granted. That leads to shutting down Cerebro in hopes that the mystery assailant(s) can be traced, and Illyana Rasputin ‘ports Summers to the Jean Grey School of Higher Learning on the only lead the Uncanny X-Men can muster.

There’s no more love to be lost between Summers and Hank McCoy — well, at least from McCoy’s standpoint — and I never thought I’d see the relationship between the two deteriorate to this point. With no other suspects left to question, Summers asks to see what McCoy’s working on which prompts an appropriate response — and that’s assuming McCoy has nothing to do with these mysterious Sentinels.

Meanwhile in Madripoor, the Blob struggles with his addiction to MGH, the drug Mystique has been harvesting from Dazzler. Mystique and Sabretooth find the Blob breaking into the clinic and give him a stern talking to. MGH isn’t just a drug that gives mutants a quick pick me up — in this case, it seems the Blob has lost his mutant powers and is taking the hormone to bring it back. Also, methinks the Blob has an ulterior motive for breaking in which could have been spurred from Magneto’s attack on the Madripoor rulers way back in Uncanny X-Men #16.

The issue ends on a cliffhanger as the X-Men are suddenly attacked, and I couldn’t help but feel like the power had just gone out during a basketball game as the potential game-winning shot was taken.

I can’t wait for the next issue.

Uncanny X-Men #20 isn’t a great one-off — it’s got a lot of setup that recollects all of the primary plot points for the title with a few steps forward going into what seems like an epic battle. We know Scott Summers is being hunted by S.H.I.E.L.D. for his time spent as the leader of the Phoenix Five, and we know there’s a mysterious Sentinel builder who’s been testing his creations out on the team. It doesn’t help that Cyclops is persona non grata to his former teammates, and the strained tensions are as palpable as ever, if not more so.

There’s also the complicating dynamic of the two teams under his charge that are filled with non-experienced mutants thrust into Cyclops’ war.

Still, the issue is entertaining thanks to Brian Michael Bendis’ ability to keep things interesting with dynamic dialogue that pokes and jabs. That Maria Hill would be attracted to Cyclops’ bad boy style — or at least have that thought implanted — opens up new possibilities and creates history.

There’s also something to be said for the various scenes that don’t feel one-and-done. Who knows what the Blob is really up to, and what will happen to S.H.I.E.L.D. as it convenes on Summers’ position even as Mystique is onboard posing as mutant liaison Dazzler? Bendis is great at positing plot points, and the success of the stories will depend on how well these seeds come to fruition.

Chris Bachalo has his work cut out for him. Besides the very last page and the one panel where the Blob breaks the lock, there’s no action this issue. You would think an issue filled with talking would feel static, but Bachalo’s pages are filled with detail, characters, and setting — everything except for the screen cap used for the television monitor on the Helicarrier bridge (but that’s just another awesome tidbit).

I especially liked Bachalo’s colors this time around because there’s a lot more of them. Besides the first scene where Hill interrogates Hijack, we get more variance in the palette with some high-contrast stuff in Madripoor and some sunset sky at the Jean Grey school. The blues in the Cerebro room are pretty monochromatic but for a purpose — the tech feel to the panels is immersive.

And is it just me, or have they been adding more and more inkers each issue?

Uncanny X-Men has six — count ’em, six! — of them, and each one should be commended for every outline, detail, and shade on the characters, Helicarrier, backgrounds, and buildings. The saying, No one notices when you’ve done the job right, is brought to mind, and Tim Townsend, Wayne Faucher, Jon Holdredge, Jaime Mendoza, Victor Olazaba, and Al Vey should be thanked for not creating variances on the pages with inker-specific stylings that would have separated panels according to who worked on them.

I expect next issue to get on with the storyline. There’s been some great setup with some interesting develpoments, and it’s time to get this thing moving forward. Since Uncanny X-Men began, we’ve seen Scott’s team grow into a formidable force. The stakes are even higher now, but when will we finally see some action? 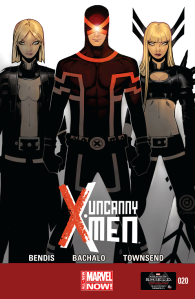 Buy Uncanny X-Men #20 from Things From Another World!