If you’ve been thinking, Hey, isn’t it time for an X-Men crossover — your wish has been granted!

But this is something more, something — I guess you would say, universal.

Serving as a prequel — the events this issue actually take place before All-New X-Men #22.NOW which was released a week before — Guardians of the Galaxy #11.NOW brings readers up to speed on what’s going on the universe as the Shi’ar bring their case before the Kings and Queens of the galaxy.

The Shi’ar have long been wary of the Phoenix, and Jean Grey’s appearance in the present has given the Shi’ar something they’ve wanted for a long time: a trial.

And though the rest of the Kings and Queens are reluctant to hold a person accountable for crimes they’ve yet to commit, Gladiator believes it’s worth holding a court.

Meanwhile, a Skrull posing as Gamora takes Peter Quill as bounty only to lose her head — kek! — when Angela and the real Gamora see them in the marketplace. When the Guardians of the Galaxy return to the ship, Rocket Raccoon reveals a discovery that the Badoon will use the court as a distraction as they gear up for war.

It’s a briskly paced issue that brings us current with some nifty back story plotting. Readers unfamiliar with the characters won’t have to struggle too hard to get up to speed. As usual, Brian Michael Bendis creates an issue with humor, concise conflicts, and a view of the big picture that will instantly acclimate anyone just joining the story. There’s an immediate draw to the size and scope of what may come that builds up anticipation — it’s something that Bendis does amazingly well with his story arcs. 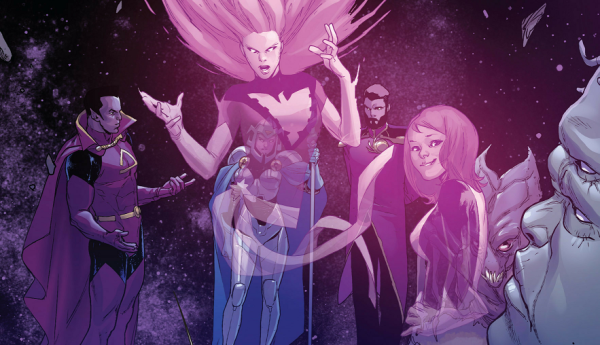 And when it comes to little details here and there, Bendis doesn’t forget the characters have lives and relationships. There’s one-page spread featuring former Guardian Tony Stark who’s caught unawares trying to record a video for his ex-shipmates. There’s a bit of brevity as Rocket tells Stark they’re watching him live, and when the feed cuts off, it’s back to business as usual for the crew.

Sara Pichelli’s pencils adorn this issue with beautifully realized characters. In a similar vein to All-New X-Men’s Stuart Immonen, Pichelli’s characters are attractive, expressive, and active. Comic readers who aren’t familiar with Pichelli’s interior work and know her only from the covers she draws — please pick up this issue. She is a superstar in the making.

It would be very apparent if Justin Ponsor’s colors weren’t up to snuff — everything else about this issue is slickly produced. But Ponsor kicks it up a notch with beautiful colors and lighting techniques a la Marte Gracia. Fans of All-New X-Men with its creative team of Immonen, Wade Von Grawbadger, and Gracia should put Guardians of the Galaxy. Tonally, both books are very similar in what kind of story is conveyed. Ponsor, working on GotG, nails it with a lush palette that’s just gorgeous to look at.

Guardians of the Galaxy #11.NOW is cut and dry without losing flavor. It’s a delicious morsel that sets the stage for a cosmic X-Men showdown that brings in another franchise which gets its time on the silver screen this summer. It’s very possible fans of the All-New X-Men series will see enough here to want to continue with the series even after the crossover’s finished, and I’m hoping Marvel doesn’t give us the old bait and switch by taking some of the creatives off this book.

Because right now, it’s a winner.

Next Issue: Guardians of the Galaxy #12 Review

Buy Guardians of the Galaxy #11.NOW from Things From Another World!