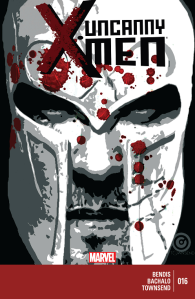 About 20 years ago, Professor X decided to split the X-Men into two teams — gold and blue — as a tactical countermeasure against the various threats they would likely face.

Of course, it wasn’t Professor X’s plan as much as it was Marvel’s — Professor X is a fictional character, and Marvel knew it had a cash cow on its hands.

X-Men #1 went on to becomme the highest selling comic book of all time, and Cyclops’ blue team, stacked with popular heavy hitters like Wolverine, Gambit, and Psylocke, took on their most popular foe — Magneto, ruler of the space-bound mutant safe haven Asteroid M.

Cyclops’ team, whose exploits are now featured on Uncanny X-Men, contains none of his original blue teammates, and their most formidable villain has become the team’s most powerful member — or the one with the most potential. Add to that Emma Frost’s place on the team — in Uncanny X-Men #281, the issue announcing the formation of the two teams before X-Men #1 hit stands, Frost’s meeting with the X-Men turns into a bloodbath with Jean Grey jumping into Frost’s body.

The ironies. The incredible ironies.

Jean Grey has since died — again — and come back. Sort of. The classic X-Men now exist within the halls of Weapon X as a subgroup of elder Cyclops’ X-Men team, and the pages of Uncanny X-Men have seen the team swell with a round of new and powerful recruits. 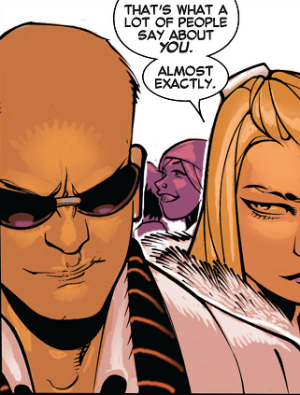 So, let’s talk about issue #16, a character piece on the Master of Magnetism whose belief that mutants should take their place over humankind didn’t sit well with Professor Xavier’s dream of peaceful co-existence — not to mention that it makes Erik Lensherr seem a little hypocritical given his Jewish background and experience in a concentration camp.

In issue #16, Magneto returns to where Cyclops made a surprise appearance at a rally that turned messy when an uber-Sentinel appeared. Magneto’s daydream of turning the pain he’s felt back onto the crowd is interrupted when Dazzler appears.

Dazzler’s been working for S.H.I.E.L.D. as its mutant liaison, and she gives Magneto news of Madripoor turning into a mutant haven with a Las Vegas angle.

An investigation into the island country reveals it’s more like the wild west than a utopia, and Magneto finds out the mutant leader of the island is none other than Dazzler, or actually Mystique pretending to be Dazzler. Mystique’s entourage includes familiar faces and former members of the Brotherhood, the group Magneto founded.

Mystique’s vision for a mutant haven doesn’t sit well with Magneto. The fact that it doesn’t align with Professor Xavier’s dream or even his own previous beliefs makes Erik react violently, and his powers are on display as he systematically takes apart the entire team and leaves them in a pile of rubble.

Uncanny X-Men #16 is a geek tour de force because of its many thematic elements. Brian Michael Bendis proves he’s worthy of the X-Men torch by writing an issue so filled with rich history, contrasting ironies, and character development without blatant narratives. 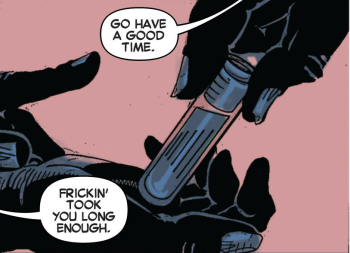 The issue features a cast of Cyclops, Mystique, and Magneto — all three who’ve created utopias in one form or another. Each has a distinct vision of the future, though Erik’s may be more in step with Cyclops’.

And now that Magneto’s powers have seemingly come back online with this violent outburst, could it be that Magneto has reverted to his old state along with his original beliefs? Or has he revealed his reasoning for joining Cyclops’ team, a band of powerful mutants working to create a better world for all?

Either way, seeing Magneto in action is no joke, and it showcases why it took an entire team of X-Men to battle him. The ability to launch bullets, pick them up, and then launch them at others is a tremendous power, and when he’s done riddling everyone with bullet wounds, he flies himself out on a chopper and demolishes the high-rise that hosted the meeting.

Chris Bachalo looks like he’s having tons of fun penciling the issue because the artwork looks like it’s gone up a step. Bachalo is one of Marvel’s premier talents, and he’s shown himself up by creating a consistently wonderful issue with plenty of detail that puts the pedal to the metal for explosive action. The use of waves to show where Magneto’s powers are working layers panels with a visual representation that gives readers a clearer idea of how Magneto works.

Bachalo’s colors also seem to be more colorful this time around, though he does go monochromatic on a few pages with the mustard yellows. Those specific pages are filled with blistering action which warrants a more holistic approach to their interpretation.

Tim Townsend, Al Vey, Mark Irwin, and Victor Olazaba return for inks, and it’s becoming clear why it takes a team to ink Bachalo’s pencils. The amount of lines and the varying thickness and shades reveals a talented cast whose collective work produces great art.

Uncanny X-Men #16 ends on a curious note with a caption saying Magneto will next be seen in his own #1 issue. What that means for his standing on the team could be disappointing for those who want to see the X-Men go to battle with a full-powered Magneto on the squad. By the look of it, Magneto will be off on his own doing what he does.

If that makes Uncanny X-Men seem a little doused, think of the possibility of Cyclops’ team once again going toe to toe with him.

Buy Uncanny X-Men #16 from Things From Another World!