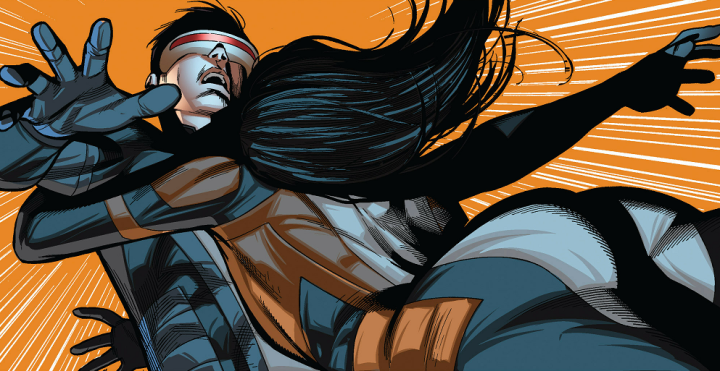 Taken captive inside the Purifiers’ compound, the X-Men await Stryker’s next move as he contemplates revenge and the consequences of messing with time.

To help him decide, Stryker calls in Monica Rappaccini of A.I.M. who tries to convince him to release the classic X-Men or risk altering the world.

All-New X-Men #21 is pretty cut and dry with a flashback detailing Stryker’s father’s first contact with A.I.M. when young Stryker was ill. The flashback doesn’t give definitive answers about whether Stryker’s power comes from a mutant ability or a genetic modification — it could very well be both — but it’s clear that William knew something was going on.

The X-Men escape pretty easily — Kitty Pryde phases out of her chains while Jean Grey coordinates psychically with the rest of the team. With the Purifiers and A.I.M. subdued, S.H.I.E.L.D.’s called in, and Scott Summers comforts a broken Laura Kinney who just found out her presumed secret exploits in the Arena were broadcast all over the world.

As a character development piece, All-New X-Men #20 gives Summers’ relationship with Kinney a basis. Kinney returns the hug Cyclops initiated last issue, and if the expression on Jean’s face tells us anything — it’s that she’s missing out.

Which brings up one of the things that Brian Michael Bendis is doing right. After Avengers vs. X-Men threw a huge wrench in Cyclops’ life, Bendis has made it a point to make Summers more than the flavor of the month. What some might call a rehabilitation has seemed more like a thesis on the man that has led the X-Men for the last 50 years.

When Cyclops was first introduced in X-Men #1, he was a shy, awkward teen. Over the years, he’s developed into the poster boy for mutantkind — a sort of King Arthur in Professor X’s mutant dream. Throughout Bendis’ run on the X-Men series, the contrasts between the present version of Cyclops and his younger self have become more defined as the two have now joined together on the same team. Where the elder Cyclops has become more entrenched in his stances concerning the possibility and process of building a society where humans and mutants can live side by side in peace, the younger Cyclops is still maturing, though at a faster rate than the original Cyclops did in the 60s and 70s. Jean Grey was Cyclops’ first love, but history may be changing in front of our eyes. What that will do to both Cyclops matters because of what we already know.

And while some may still have a bitter taste in their mouth from the events of AvX, the Cyclops of today isn’t all that different except for some of the residual effects of the Phoenix — namely the one involving Professor X’s murder. Yes, he’s more confident than ever, but his position hasn’t changed as much as it’s developed. He’s still the white knight placing an entire race on his shoulders. The longer this story goes on, the more readers see why he’s the X-Men’s greatest and truest leader — the proof being, he’s still leading the most potent group of X-Men and affecting the most change. In the X-Universe, he’s swayed Kitty Pryde to his court along with his original team.

If there’s a full circle to be drawn, it’s in Bendis’ hands. He holds the keys to the X-Universe, and the job he’s done has been excellent thus far with nods to Chris Claremont that have given hardcore fans something to think about. The flashback scene reads and looks like one of Claremont’s graphic novels, and Brandon Peterson shows he can switch it up by changing his art style with some help from James Campbell in the colors department.

The art this issue looks better than the past few issues in the story arc with improvement in the faces of the characters. There’s less action in this issue — most of the X-Men are strung up for a majority of the pages — which gives Peterson time to focus on the character as actors, but when the action does kick up, Peterson’s composition brings it with excellent panels that display what readers need to see.

Israel Silva needs no help coloring this issue — apart from the flashback — and he does an excellent job with consistent colors. The entirety of the present plotline takes place in a darkened compound, and when the fireworks go off, it’s a welcome contrast. 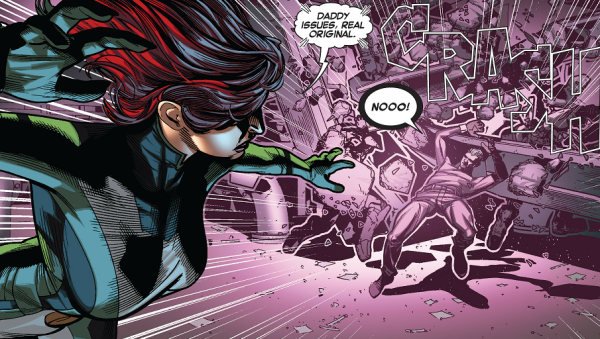 During the last few pages, the word apocalypse is brought up, and if there’s one villain the X-Men haven’t fought in a long time, it’s old Blue-Lips. If that’s a hint of things to come, it will be an interesting choice because of Cyclops’ long history with Apocalypse, namely the events that involve Cyclops’ son Cable.

The possibilities are timeless.

Buy All-New X-Men #21 from Things From Another World!