Laura Kinney — Wolverine’s genetic clone — wakes up in her birthplace, the new home of the classic X-Men who have joined forces with Cyclops’ Uncanny X-Men team.

Waking up in Weapon X, the facility that created her, immediately puts X-23 into a defensive mode, and it doesn’t help that her senses tell her she’s with familiar but younger-looking faces.

Young Scott Summers takes the initiative to reach out to the startled Kinney, and his calm and cool demeanor keeps the volatile situation from getting further out of hand. Kinney would rather keep the details of her troubled past in the dark while taking her anger out on the Purifiers — the zealots the X-Men rescued Laura from last issue.

Returning to Florida for an attack on the Purifiers’ compound reveals the organization is led by William Stryker’s son. Just as the X-Men are about to claim another victory, Stryker unleashes a blast that leaves everyone in the room stunned.

The irony isn’t lost here — Stryker’s mission to rid the world of mutants possibly stems from the fact he himself is one. Papa Stryker will go down in history as one of the X-Men’s top villains, and for the classic X-Men who’ve yet to come face to face with him, their first battle with the Strykers happens here and now with the William’s progeny. 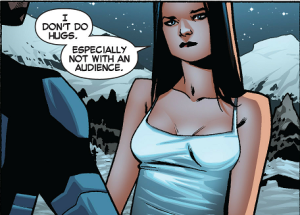 That Brian Michael Bendis would create villains related to villains that would factor later/earlier into the X-Men’s story shows the field’s wide open for interesting conflicts. Bendis gets to play within a vast sandbox filled with history, characters, and plotlines weaving in time through twists and turns.

Add to that the awesomely ironic and budding romance between young Scott and Laura, a relationship that makes the already awkward situation between Summers and Jean Grey all the more complicated. It also adds a new perspective on Cyclops’ relationship with Wolverine, and the story has gained a new and interesting dimension that will hopefully be played up as the story progresses.

The revolving door of artists continues to turn with Brandon Peterson covering the second half of the book. Mahmud Asrar joins the creative team with an art style that’s closer to Stuart Immonen’s. Asrar’s doe-eyed characters are attractive and expressive, playing a huge part in getting the point and tone across for Kinney and Summers’ first interaction. Scott’s hug looks natural, effectively bringing back haunting adolescent memories, and Asrar gets the credit for getting it right. 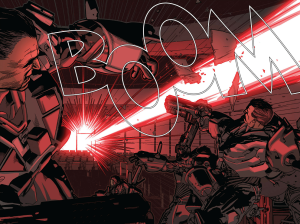 Peterson gets to draw the action-heavy second act, and though his young X-Men characters still look too old, the panels don’t lack for detail. Each panel is filled with cinematic compositions that really go above and beyond. Peterson took his time with the artwork, and it shows with the amount of work put forth in these pages.

Not to be outdone or ignored, Israel Silva and Marte Gracia’s colors look beautiful. Each page pops with color, and the shades add muscle tone along with facial highlights that add to the characters’ facial expressions. The concerted efforts between the members of the creative team form another solid book to the title.

Where the story goes from here remains to be seen, though the cover may provide the biggest hint of things to come. With X-23 joining the X-Men ranks, the X-Universe has added another great character to its ongoing story, and it’s an addition that adds intrigue to go along with that teenage drama.

Buy All-New X-Men #20 from Things From Another World!