And just when things looked like they were heading towards an eventful climax full of universe-changing events — Marvel offers up this stinker of an issue.

Last issue, Cyclops’ team infiltrated the mansion and confronted the future X-Men members who’ve come back to send the classic X-Men into the past.

Wolverine and the X-Men #37 begins in mindspace where future-Jean gets to plant a kiss on her former lover before escaping — somehow — with the rest of the Brotherhood of (future) Evil Mutants. It isn’t clear if the team picked that name out of legacy, or if it was given to them by the proclaimed X-Men of the future, but all points converge on the place where the original X-Men first fought Magneto.

Luring S.H.I.E.L.D. to the location gives future-Jean the opportunity to compromise their weapons systems and unleash an attack on all of the mutants fighting on the ground.

It’s an anti-climactic issue that misses the mark on most fronts. Beginning with the plotting — Jason Aaron’s scripts falter with an issue that falls apart as soon as it begins. While Cyclops gets a lesson in why he shouldn’t let Xorn into his head — by someone who fails to do any better — the Brotherhood hijack a jet and leave the premises thanks to Wolverine and his team wanting to start a full discussion on what’s happening.

As the Brotherhood’s commandeered Blackbird races towards a location filled with meaning, it appears that no one has died except for Deadpool. Though Xavier’s paralyzed, Molly looks no worse for the wear from being impaled by Colossus’ blade. Apparently, Deadpool’s healing factor has finally met its match in gravity. If only he’d been gutted instead. 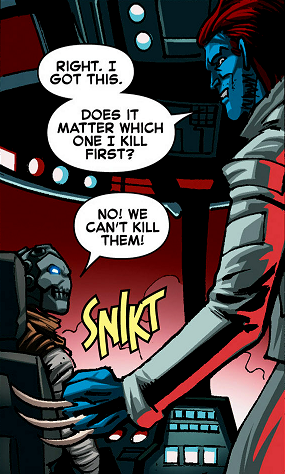 The Brotherhood’s Plan B seems to be a suicide mission that has its hopes resting in S.H.I.E.L.D. showing up with a squadron of helicarriers. As a flurry of missiles fall upon the X-Men members, future-Jean — who’s apparently off her rocker — explains, “Look at what they think of us.”

But you pulled the trigger!

And while the Brotherhood of Evil Mutants hasn’t really acted explicitly evil — they actually seemed a little reasonable — until now with Grey’s missiles aimed at everyone, it’s beginning to look like the name is a self-fulfilling prophecy forced on readers.

It all seems nnecessarily labyrinthine. The allusions that Magik’s partly or wholly responsible for what influences the Brotherhood combined with Dazzler’s assassination and this issue’s reveal that humanity hates mutants equals a whole lot of stringing readers along. There are far too few answers, and with only one issue left, will Battle of the Atom end up revealing itself to be a vehicle built to up sales of the X-Books?

Aaron infuses the issue with humor, but it’s misplaced. As if stalling for time by telling jokes on the stage while the main act readies itself, Aaron’s issue drags along towards an inevitable finish to be handed back towards Brian Michael Bendis — who should have had more control over individual issues. And looking at how much they’ll have to cram within the last issue of the crossover, one can only hope it ends well — and that it ends at all in some way without feeling even more forced and rushed.

Giuseppe Camuncoli’s pencils feel a little lacking, though they do get the job done with what’s presented in the panels. Faces are a little distorted and misshapen, and characters are largely unnattractive with brow-bent grimaces.

Camuncoli does work it in the action department by drawing up a poster-worthy two-page spread filled with plenty of X-Men. The panels filled with movement and violence show off Camuncoli’s strengths, but when the pages go back to relying character expressions, they display the penciller’s weaknesses.

Andrew Currie’s lines are clean, but the colors by Matt Milla and Israel Silva aren’t always up to par. Colors are a little flat, and shading in some areas adds some muddy details.

By count, there are three generations worth of X-Men in the present. The classic X-Men can’t be sent back, the future X-Men won’t explain themselves, and the present X-Men just want to fight. Unfortunately, nothing’s been fleshed out in meaningful fashion, and though there have been solid issues this crossover, a terrible ending can sour the entire experience. With one more issue left — an issue that needs to really rock for this crossover to be remembered fondly — this crossover so far has been largely simple and uneventful. Wolverine and the X-Men #37 needed to bring the story to a critical mass for an epic conclusion.

Instead, it lumbers around and rolls over. Those waiting for the trade paperback should skip this section and replace it with — and then everyone decided to take it outside.

Buy Wolverine and the X-Men #37 from Things From Another World!